Wilde - The Selfish Giant - Keeping the Public in Public Domain

Winter still tries to cling to parts of the United States, at times including Michigan.  I keep telling myself Lent is a Middle English word for "springtime.  The Merriam-Webster dictionary says its first known use was in the 13th century and it's "akin to Old High German lenzin spring."  This all fits perfectly with a tale of the seasons from Oscar Wilde often used as an Easter story.  Easter's quickly approaching and the story divides well with a good split between before and after, so this week I'll only give the first half.  It doesn't have to be limited to Easter.  I've used it as a movie in a summer series, for example.

Next week I will add to the story's conclusion some ways this beloved story may be used in either teaching or other programs.

While Wilde said the story was a fairy tale to read to children, this is only because he didn't write for their reading level.  It has many levels to it as, like all Wilde's writing, it is done so well.  Definitely adults can enjoy it, too.

As "Gypsy Thornton or InkGypsy" put it when writing about The Selfish Giant in her Once Upon a Blog: This story seems to be one of those 'illustrators's dream' assignments as I've rarely seen a sub-par set of illustrations for this fairy tale. And how could it not be? Giants, children, seasons, castles, trees, a little visit from a not-quite-human visitor and a village populated with interesting characters.. there's so much to work with.

But let's have other comments wait and begin. 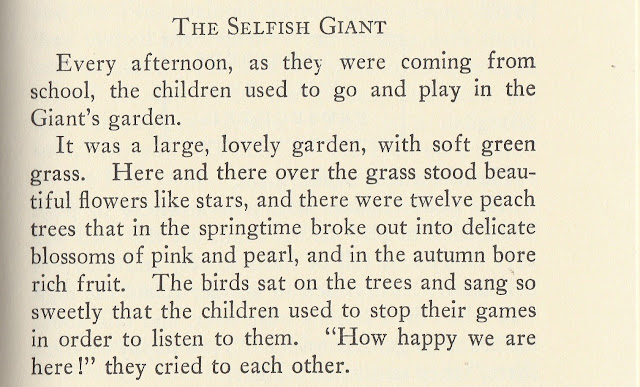 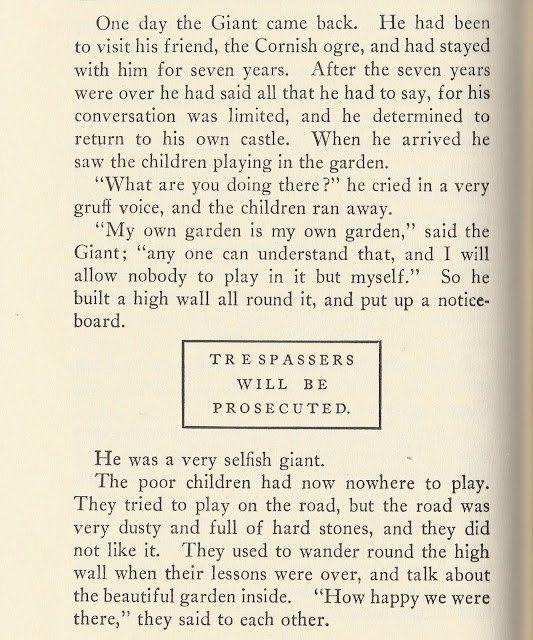 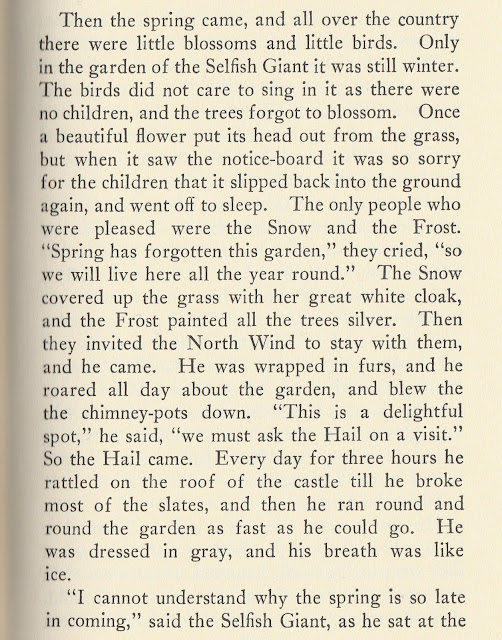 What indeed?  Like the Giant "I hope there will be a change in the weather."

As a storyteller I prepared this segment while about to head into a late wintry storm coming across the state, but was told the day after I'm back home we should reach 70 degrees!  At the risk of being as Selfish as a Giant, I'll hold off on the rest of the story until next week, but I'll suggest looking at this picture by Wladimir Dowgialo from Belarus.
The book is in Belarusian and so I trust both the "InkGypsy" and I are on safe grounds -- whether snow-covered or not.  Her blog gives you even more opportunity to see this work, so I recommend clicking the hotlink in the caption above.

Next week's story conclusion will include a variety of resources for using this story.