If April showers bring May flowers, what do Mayflowers bring?
. . .
Pilgrims, of course, if you remember your children's riddles.  Right now the state where I grew up, Missouri, and a few other states just would like to see those showers ease off the flooding.  While hiking on the few days dry enough to do so, this pilgrim sees Trilliums are now sprouting.  I love the plant, as do my Canadian neighbors in Ontario where it's the Provincial flower. 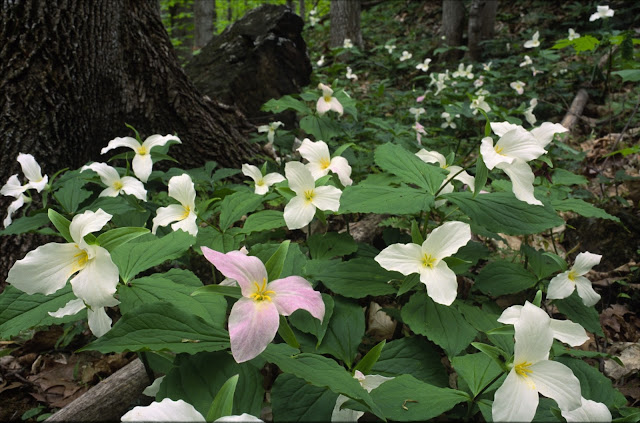 I had something else I was going to write, but this plant grabbed me and insisted I look for stories, facts, and so much more.  I used to live in 15 acres of woods and know that the oak leaf acidity and dampness of Michigan's forests are perfect growing conditions.  The photo above also gives proof of something I was convinced trilliums could do. . . change color!

In the past I have posted three stories here from Thornton W. Burgess, none of which are about plants.  Today's story comes from The Burgess Flower Book for Children.  It's not quite as much of a story format as his several Mother West Wind books, nor even his The Burgess Bird Book for Children and The Burgess Animal Book for Children as they lend themselves more to characters having an adventure.  As a result I've had to take the excerpt out of Chapter XV, "Buttercups and Lily Cousins."  After that excerpt I have a few hotlinks to explore further, including yet two other trillium stories.  Oh, and the character of "Peter" is Peter Rabbit, and Burgess's Peter Rabbit is not to be confused with the Beatrix Potter character of the same name. 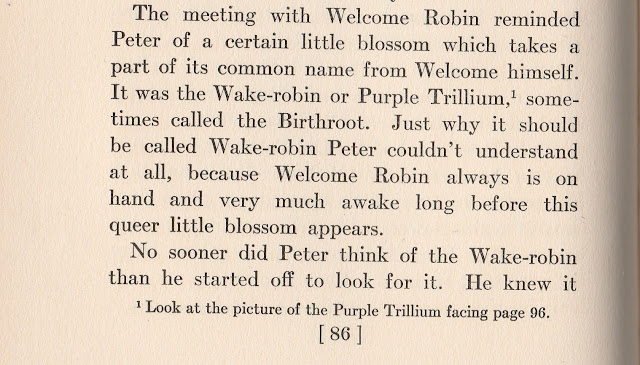 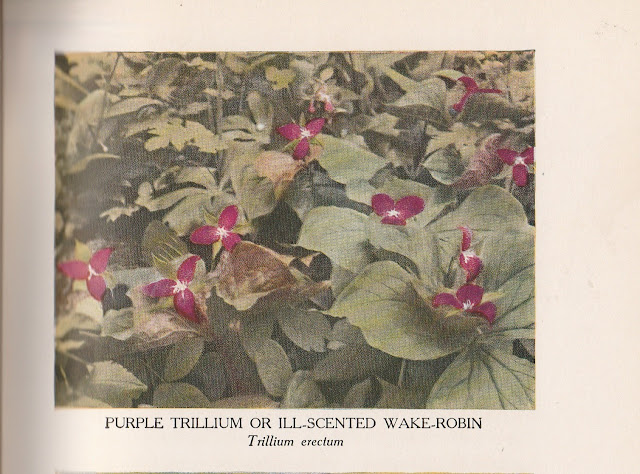 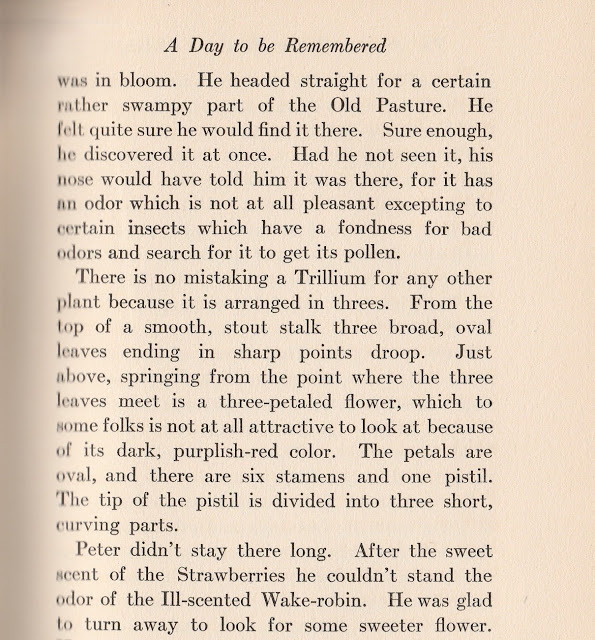 . . . (rabbits do tend to hop around and so shall we to the next mention of trilliums.) 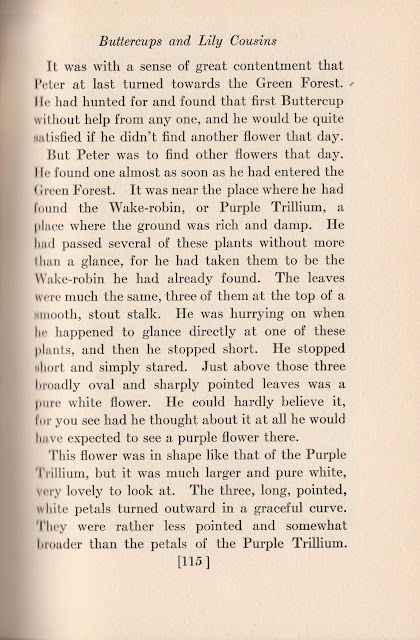 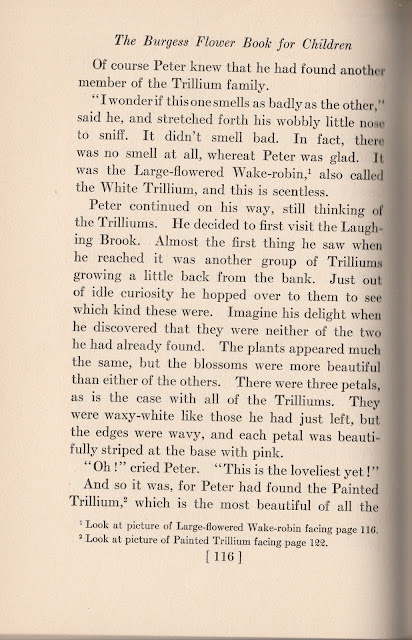 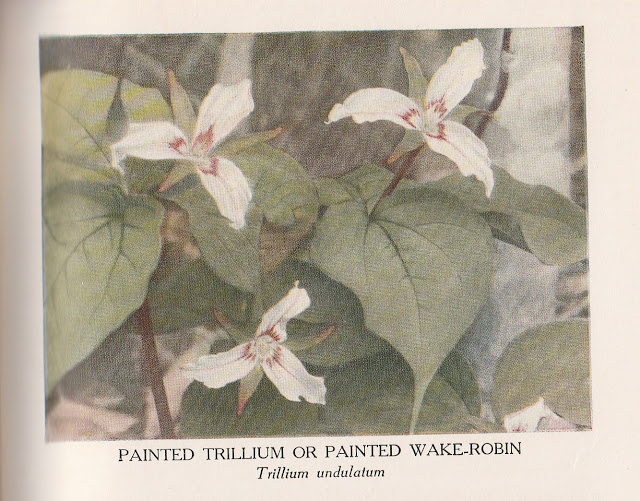 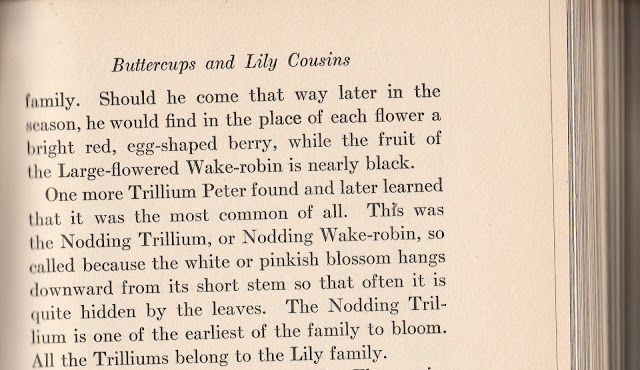 That's as close as Burgess comes to a story about this lovely flower for this book is almost a field guide to flowers.  This is why today's title isn't just Burgess's work.  Here's a Native American Legend of the Trillium from this area where the Ojibwa are among Michigan's People of the Three Fires or Anishinaabe, and among Canada's First Nations.  It sounds somewhat reminiscent of a story I've heard about St. Patrick's use of the shamrock for the same purpose.  Another story, "Don't Pick the Trillium", is from further south in the Appalachian mountains.

That last story gives an introduction to some of the "mystery and lore" of the trillium.  It's almost required that we give the article from Wikipedia on the Trillium.  I know Wikipedia should not be the end of all research, but it's always worth starting there for an overview.  Beyond that overview, it's up to you how much interests you, such as Ten-things-to-know-about-trilliums which gives oh so many names and more of a gardening view, as does "Two becomes 200: how to divide trillium".  That's not likely for me as I always claim plants quake in fear at the prospect of my own pitiful gardening skills.  It's one of the reasons I love wildflowers.  I also enjoy, as I mentioned last week, knowing the other uses of wild plants.  If that's you, too, give a look at trilliums medicinal use

Before I ever started school I remember my mother taking me out for walks and identifying plants.  She also read me the classic (1906) When the Root Children Wake Up, which has changed its cover over the years and now has a new version by Audrey Wood with illustrations by Ned Bittinger. 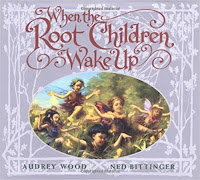 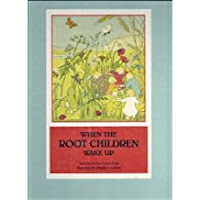 I recommend looking at both. Reading the various reviews on Amazon, I'm convinced there's room enough for each version.

It's also why I grew up loving the many Zim Field Guides and now am giving the closest thing to a new version of those wonderful pocket sized books, the National Geographic Kids Ultimate Field Explorer guides as they are published.  Adults would be served well by getting the out-of-print Zim books, but children inclined towards nature will be more intrigued by the new series.