Autumn is a last gasp of summer's bounty, whether food or festivals.  Many now celebrate Harvest Festivals, so today I want to give a few ideas of how I (and you) do that in story.  Recently this program was around the campfire at a Yogi Bear Jellystone Park, so I'll also show how that camp was featured, although I've told at state parks and other campgrounds.

I like to start out with a bit of audience participation and began with a Jamaican tale found in Philip Sherlock's Anansi the Spider Man.  Unfortunately its copyright won't permit my giving it here, but I get the audience joining me in the chant of all those yams "On one leg, on two legs, on three legs, and four" coming after Tigre chanting the title of  "Ticky-Picky Boom-Boom" three times over, ending with Boof!  Because some little audience members were there, I make Tigre as dumb as possible and have a satisfying end when goat knocks them all into the water and later they make a great yam feast.  Don't want nightmares, although nightmares come from children working out other problems.

The group was young enough I didn't use the Caucasian tale of "Buried Treasure", instead using the Brothers Grimm story of "Cat and Mouse in Partnership" where the cat harvests something they were supposedly going to share and now they are no longer friends.  About this time a stretch was needed and the camp action "song" of "Hi, My name is Joe, and I work at the button factory" was changed to "Hi, my name is Yogi and I live at Jellystone Park.  One day the Ranger came and he said, 'Are you busy Yogi?'  I said 'No', so he said 'Then do this with your right paw'..."  Yogi waves; next the other paw harvests; then his feet stamp grapes; the ranger has him bang his head forward; finally when he asks, 'Are you busy Yogi?'  I said 'YES!'  The audience now was ready for "Tops and Bottoms" a tale told in many parts of the world about a trickster and a dupe (in this case a bear) agreeing to garden together with one getting the tops of what is grown and the other getting the bottoms.  The audience chooses either root crops or something where the top is eaten with our bear losing for two years straight, but finally smart enough to end the partnership.  The familiar song about "The Bear Went Over the Mountain" substituted Yogi for the word "Bear" and he was seeking honey.  I next told the Native American story about "The First Strawberries."  While a picture book of this by Joseph Bruchac identifies it as a Cherokee tale, I know of at least one book of Michigan tales from our Anishinaabe with the story, so, like the initial Anansi tale I said traveled in the minds of slaves from Africa to Jamaica, I believe this story also traveled.  It is told among more than one of our Native American nations and I tell it as an Anishinaabe might.  I also stress that in the beginning Gitchi Manito (usually translated the Great Spirit) made all three of the fruits right then.  I start with blueberries since I was in an area known for blueberries, including U-Pick farms, explaining raspberries now are harvested in autumn, with strawberries in the spring.

Here's where today's Public Domain story appeared.  I definitely re-told it since they needed a quick introduction to Arthur Scott Bailey's Cuffy Bear, who has appeared here in other Public Domain postings.  I also explained how, before tractors, horses mowed hay and I taught the audience to make the sound effect of the blades in Cuffy's adventure.  Here's a wonderful picture of such a team in action.
This is a two-part adventure and at the division I'll keep the page without cropping to avoid the size difference when the first part ends, but keep reading as Cuffy is Cuffy, and that bear's guaranteed to get into trouble.  Also see how Baked Beans + a Bear = trouble. 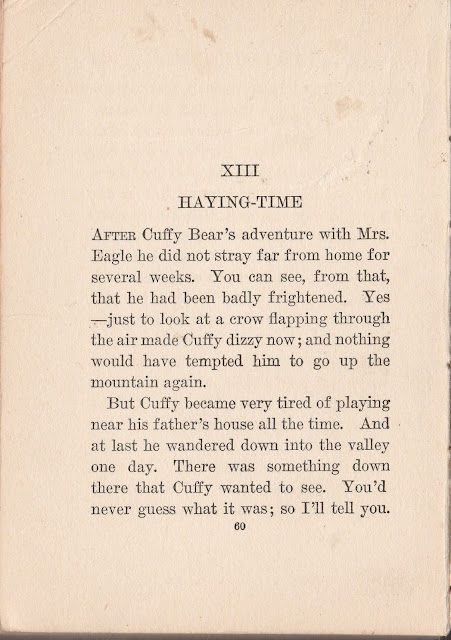 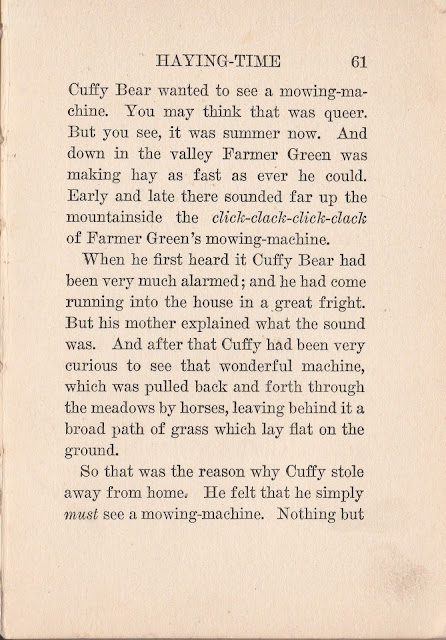 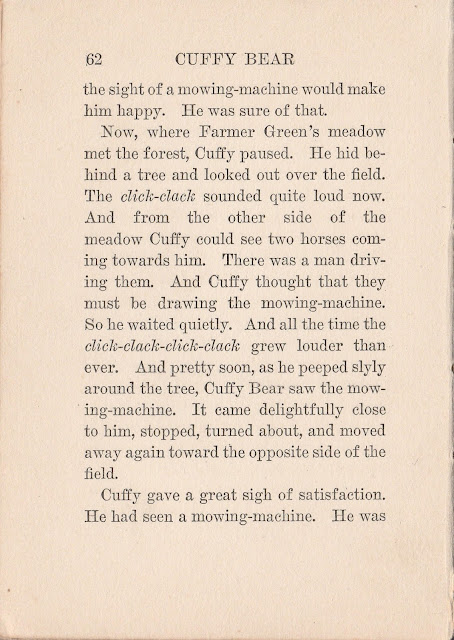 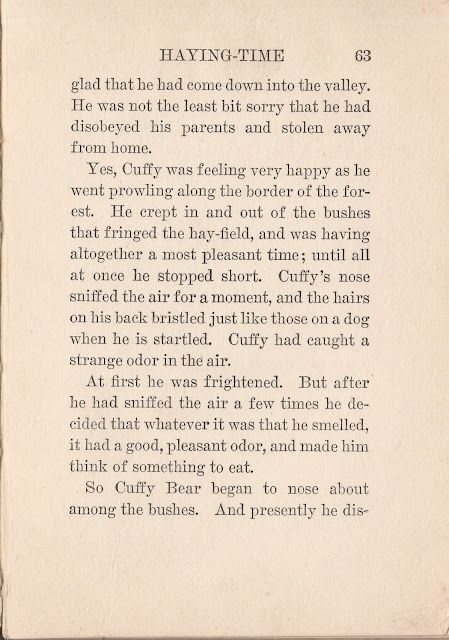 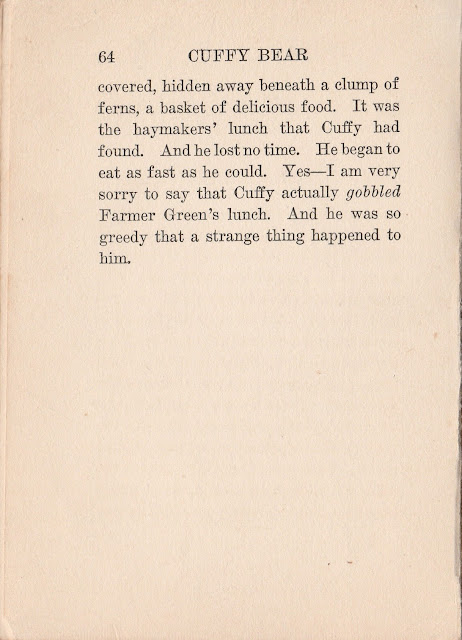 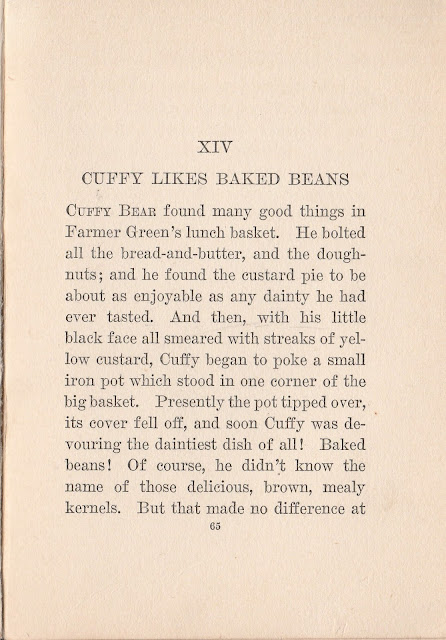 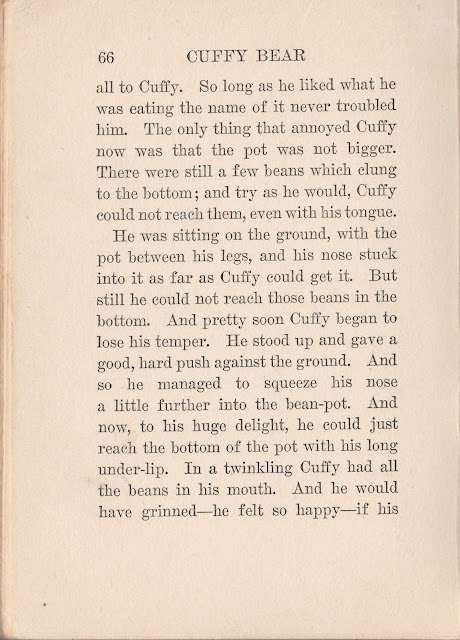 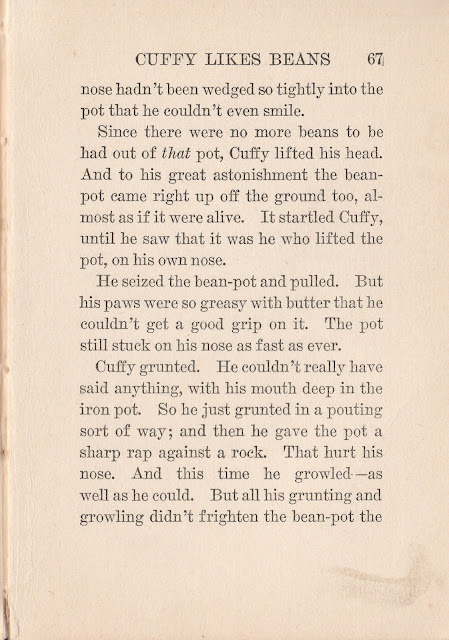 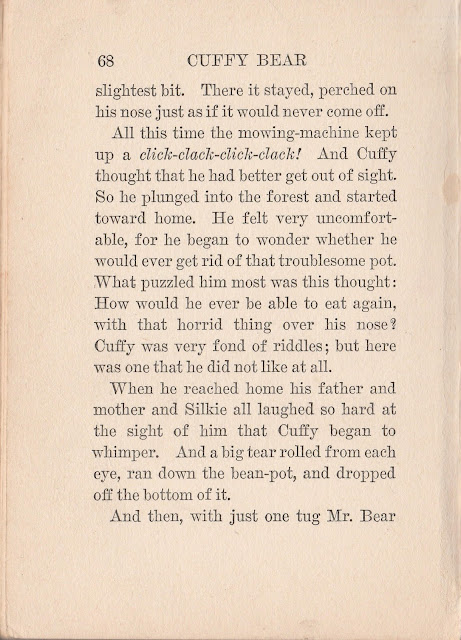 After that, for those little ones needing a night-night bit of repetition, I told something sometimes called a "French Irritating Tale."  I prefer calling them Unending Stories, but it's about a king who loves stories and promises half his kingdom to anyone telling a story that gets him to call out "STOP!"  This of course happens when "an ant went into the barn and took another grain of wheat..." is the story over and over.

Finally I officially finished by telling in voice and sign language, teaching the signs, to a story with many versions.  A recent version, The Magic Bojabi Tree, adapted by Dianne Hofmeyr attributes it to a 1923 version about the African tree able to provide all the fruits of the world if the animals just call out its unusual name.  I'm sure I have seen an earlier anthology with it, but haven't gone hunting for it.  I use a different name easily finger-spelled and from yet another picture book version of it.

By this time I had a few devoted listeners not wanting to leave, so I told the "Fill the House" story of three children of an old farmer with only the farm to leave to whomever is wisest.  The same money is given to all three and the farm would go to whomever spends it to fill the farmhouse.  The first bought balloons, but that didn't fill it.  The second bought candles which filled much, but not all the house's dark spaces.  The third spent it on inviting friends to fill the house with story and song and it did.  I said we had filled Yogi's campground with story and song and now this "encore" was for them to fill wherever they went with what they had heard and helped tell.

A great harvest indeed at Yogi Bear's Jellystone Park in South Haven and beyond.