Swanton - The Sky Country - Keeping the Public in Public Domain 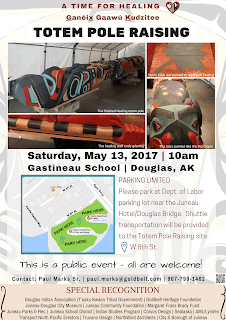 Where do we go when we die?  It's a question common to all cultures.

Beyond that, respect for the dead is a problem that arises when dealing with old cemeteries.  Indigenous grave sites have been particularly prone over the centuries to being destroyed or disturbed.  While that is not what happens in today's story, real life for Tlingit storyteller, Bob Sam, and also for a school in Alaska give us real life stories of how to reinter and honor our ancestors.  Those stories follow today's tale respectfully gathered in 1904 by John R. Swanton for the Bureau of American Ethnology where he worked for forty years.  Swanton was not only the president of the American Anthropological Association, but also at times editor of their journal, American Anthropologist.  His work was especially sensitive to Native American religious and spiritual beliefs.

Last week's stories dealt with someone dealing with losing their friends to death, but that is nothing compared to the loss of a mate.  Today's story doesn't say the man's wife died, but the abstracts at the end of Tlingit Myths and Texts says more directly it is how she "was taken away from him."  It's important to remember the myths and stories were transcribed exactly as the storyteller told it.  In the mind of this storyteller  he assumed we already should understand what being "taken away" means.  In this story it's also implied the dead go to somewhere in the sky.  Similarly many believe heaven or the after life is somewhere up above us.  What's different in this story is the man in his "half crazy" state tries to follow her and wanders until he goes to where she is in "The Sky Country." 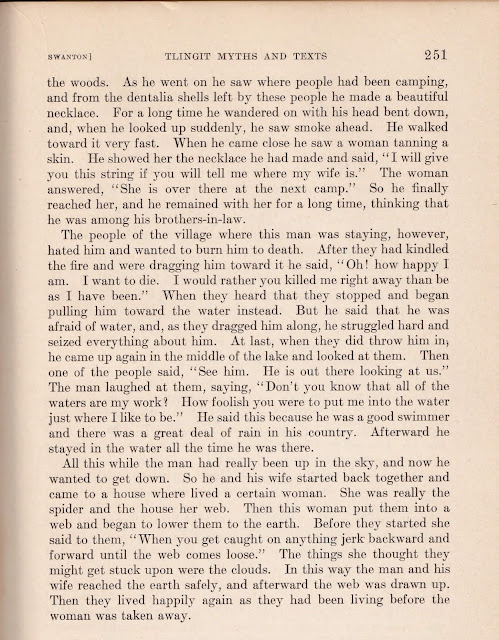 While the problem of handling old cemeteries appears sometimes in the news, the issue of Native American remains has become recognized more often in recent times than in the days when remains went to museums and universities or were simply dug up and built over.  I mentioned earlier Bob Sam has been involved in this.  A Seattle Times article details how he is working far from Alaska with the U.S. Army War College to exhume and rebury the bodies of 14 Alaskan students who died at the site which used to be the Carlisle Indian School in Pennsylvania.

(The old practice of forcing Indian students to abandon their culture by moving them to boarding schools is another highly sensitive issue in Native American history.  For here in Michigan I strongly recommend The Tree That Never Dies: Oral History of the Michigan Indians by Pamela J. Dobson.  That link lets you buy a Google copy or you may be able to borrow it through your library.)

There's much more than just the Carlisle Indian School to Sam's mission.  A 2010 article from the Juneau Empire looked back at his then 26 years of work "researching and remembering the 'forgotten places' of Southeast Alaska."

Another Juneau Empire article tells how in 1956 a Tlingit burial ground was paved over for a highway and school, but now a "Memorial pays respect to Tlingit burial ground."  The poster opening today's blog article dates back to the start of that memorial.  An earlier article tells more about the scope of the grant funding the memorial, and looked ahead to last year's further stage in the memorial.
As Michigan's Odawa elder, who has also gone on "the Long Walk", Simon Otto, would say: Walk in peace.
*******************