The photographers at the wonderful free image site, Unsplash.com had many images with the identifying subject of "Hot."  I chose this because it looks like the heat coming off the sun.
With over 185 million in the U.S. under watches and warnings, I feel wimpy complaining about what would have been a summer's afternoon growing up in muggy St. Louis (that's MO -- didn't know of the St. Louis here in MI). Then I read Wikipedia's definition:


A heat wave is a period of excessively hot weather, which may be accompanied by high humidity, especially in oceanic climate countries. While definitions vary, a heat wave is usually measured relative to the usual weather in the area and relative to normal temperatures for the season.

Michigan had a beautifully cool, but wet long spring, then we jumped into what would be comparable to a few days in August.

All of this sent me thinking of HELL.  We have a Michigan town by that name (as well as a Paradise), but I remembered deals with the devil are a popular topic for stories and often the devil loses.  Whether Faust or beyond, it's obviously something many have considered.  Leonard Magnus was the early translator of the Russian folktale collector (Cyrillic transliteration gives us two forms of the name, Aleksandr Afanas'ev, Alexander Afanasev) who saved about 600 stories.  I love those tales, but was surprised I've not posted any since 2015.  Also the only information on Magnus came from the online Encyclopedia of Science Fiction! which says:

(1879-1924) UK linguist, author, translator and textual scholar who specialized in Russian literature; of sf interest is A Japanese Utopia (1905), whose Japanese protagonist finds, in a Lost World north of Japan, an advanced, benignly anarchic Utopia. According to his Times obituary he died after, while travelling through Russia collecting folktales and folklore for a forthcoming book, he was "attacked by a malignant germ".

The Encyclopedia page link can also take you to a photo of that book's cover, but apparently A Japanese Utopia has yet to be translated into English. We're much more fortunate with Russian Folk-Tales, so spend these hot days chilling out there as if you were in frosty Siberia.  (Also take a look back at my earlier 2015 article on Magnus as he is definitely not the only translator of Afanas'ev and did only 73 of the approximately 600 tales.)

Today's story may be known to you in the German version collected by the Brothers Grimm as the tale of "The Bear Skinner."  The version Magnus offers is more compact and "Russified."  Back in 2015 I quoted him on the difference of Russian folktales from that of the German tales as having an outlook "of a careful observer, who has become callous, because he is helpless" and further notes "the prevailing note is sadness; but there is no absence of humour; yet fun merely happens, and is inherent; there is no broad, boisterous fun."  He points out the absence of fairies, giants, gnomes and personifications of nature; but the inclusion of the supernatural. . . the devil in this tale is a lesser devil, so let's see if this deal works out or not. 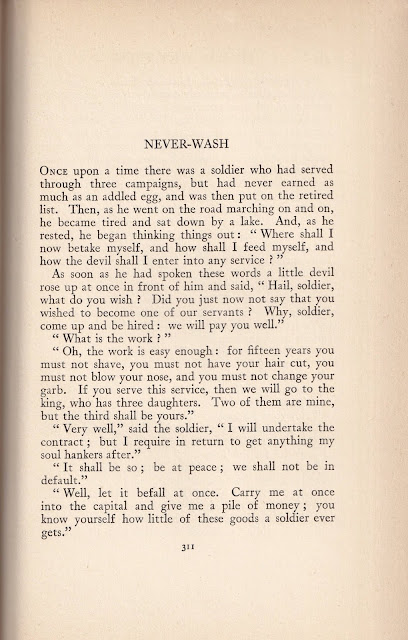 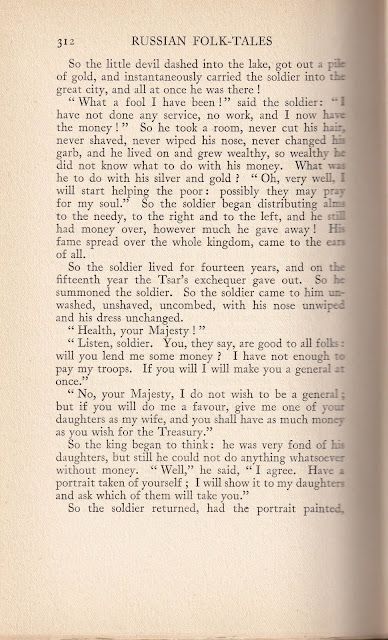 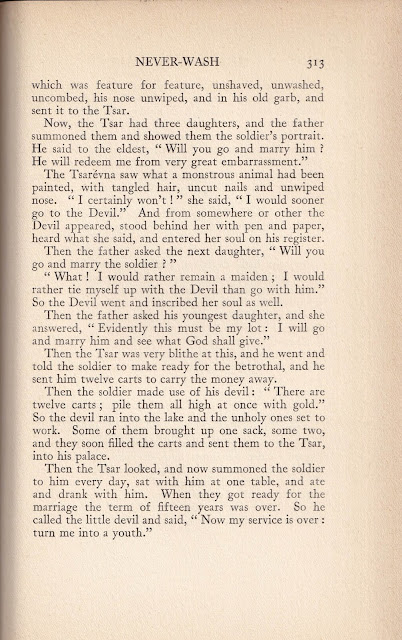 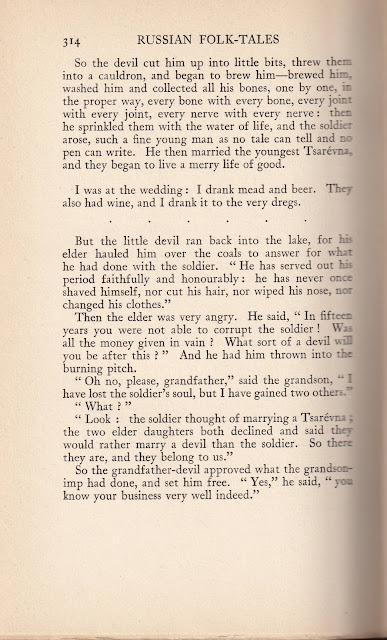 I love the classic "I was at the wedding..." statement.  As for that little devil, well should we be happy for him not going into "burning pitch" because he got two souls instead of one?  I suspect they were due there eventually anyway.

So now I say about this weather, make no comments about the devil, just "GO JUMP IN THE LAKE!" (I bet that soldier did.)

This is another of my favorite tales. It's always fun to peruse your blog, Lois.