Did you know our Solar or Gregorian date of January 17 is the start of what is called the Little Year?  It's mainly a time to prepare for the start of the Chinese New Year.  Many countries besides China and the Chinese people celebrate this time of the Lunar New Year, although the Wikipedia article also points to several Asian Lunar New Year dates due to all the many ways calendars were figured out.  Still those other dates are dwarfed by China's large population and many of Chinese ancestry around the world and it "has strongly influenced lunar new year celebrations of China's neighbouring cultures, including the Korean New Year (seol), the Tết of Vietnam, and the Losar of Tibet.[3] It is also celebrated worldwide in regions and countries with significant Overseas Chinese populations, including Singapore,[4] Indonesia, Malaysia, Myanmar,[5] Thailand, Cambodia, the Philippines,[6] and Mauritius,[7] as well as many in North America and Europe."  (Those footnotes are in the Wikipedia article.) Vietnam and Korea share similar Confucian culture, so they celebrate the Lunar New Year.  Japan once celebrated it.

Back to the current time of the "Little Year", it's not only preparation for the coming celebration, but its main activities are house cleaning to sweep away bad luck and prayers to the stove god.  Considering how it's winter in the northern hemisphere and definitely here in the mitten-shaped state of Michigan, I may not consider my stove, furnace, or fireplace a god, but certainly want to keep them all working!  As for bad luck, I'll gladly pick up a broom and sweep especially around the dirt left by my old computer tower and hope my new "All in One" lasts a long time.  I first learned of the "Little Year" at this site, ChineseNewYear.net.


The whole combination of three festivals (Little Year, Spring Festival -- which we think of as Chinese New Year, and the Lantern Festival which runs from February 5th to 8th) is there, along with a large section about food, decoration, myths about Chinese New Year, historical and modern clothing, taboos, and, of course, more.  That last one, taboos, caught my eye.  I'm not superstitious, but my recent computer woes had me check what to avoid to guarantee good luck, since that's the big wish in New Year's festivities, lunar or solar.

Taboos:
It's fun to look at such traditions and doubt much is really believed, although lovers of the television show Fresh Off the Boat or various Asian books and films can just hear the mother saying "It's for your own good!"

I imagine you have heard about the 12 Chinese zodiac animals and how the coming year is the Year of the Rat.  That doesn't  sound like a good year to most of us, but "In Chinese culture, rats were seen as a sign of wealth and surplus. Because of their reproduction rate, married couples also prayed to them for children."  The good attributes of a Rat person is they're "clever, quick thinkers, but content with living a quiet and peaceful life."


Today I can celebrate by once again bringing a Public  Domain story . . . HURRAY!  It's from Sara Cone Bryant whose work has appeared here 3 times before.  It can be found with other stories and storytelling tips in her classic How to Tell Stories to Children and Some Stories to Tell and the story opens with a hint on telling it.  The story lets us go back to the days when Japan celebrated the Lunar New Year with this tale that might remind you of yet another Japanese tale, but I'll talk about that after the story. 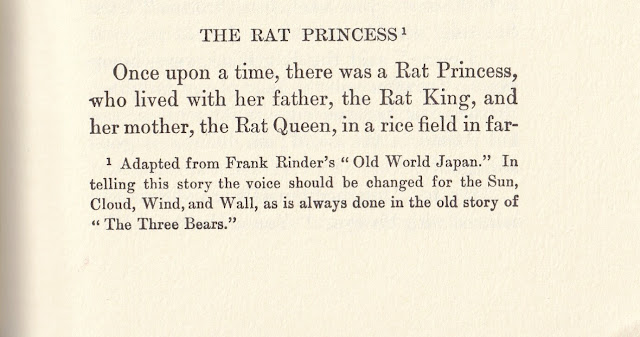 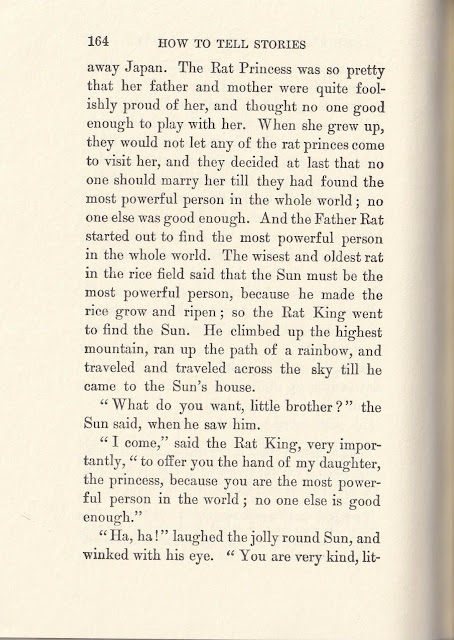 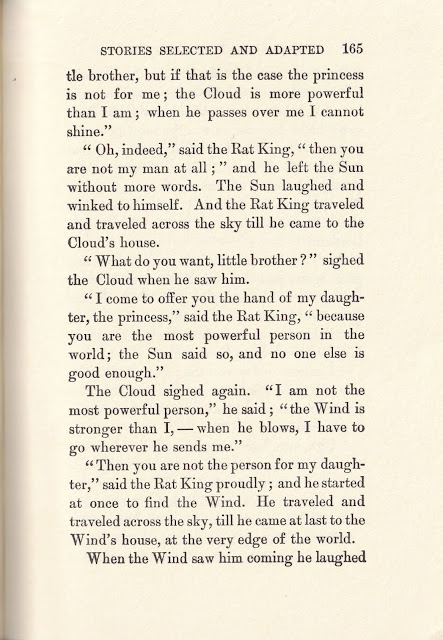 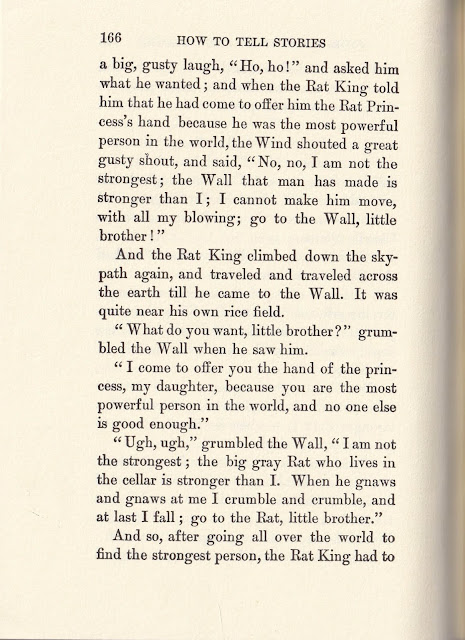 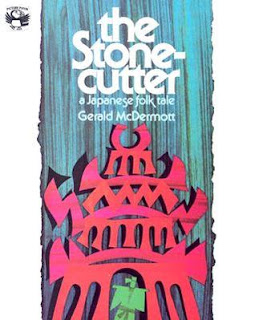 Some readers may be familiar not only with the style of this story and how one thing leads to another before coming back to the beginning, but it especially reminds me of yet another Japanese tale so well illustrated by the award-winning Gerald McDermott in The Stonecutter.

If you go to https://www.youtube.com/watch?v=vbHiI8Qo8rs you can have the rare opportunity to watch his first commercial film at the age of 19, an extremely complex animation short featuring approximately 2000 animation cels presented in six minutes.  He only made five films and all are under 12 minutes.  After retiring from film animation at the age of 32, McDermott began producing animated children’s books, eventually becoming one of the world’s best-known authors of books for young readers, winning numerous awards in the process. More about McDermott at http://www.afana.org/mcdermott.htm" from http://archive.org/