Hadn't planned on quite the New Start that a New Year (and in this case a New Decade) wound up requiring.  A week ago my computer died.  Yes, it gave some weird clues something might be having problems, but I still tried to keep it working.  The next day I was told the hard drive was hopeless.  Rest in peace or maybe it will be Rest in pieces at a nearby recycling spot.  I keep backup using both Carbonite and an external drive -- I'm kind of a "belt and suspenders" type of person.  Still I tend to use my computer like an overstuffed filing cabinet, so it will take a few days to get all my data and everything downloaded.

A library system where I used to work believed computers should be replaced every three years.  My now dead computer was so old it had been upgraded from Windows 7 to 10 and Microsloth is now in the process of phasing out updates on WIN10.  The world of technology with omnipresent computers and the internet means things seem to have planned obsolescence.   Frankly the computer world operates on the principle of "If it isn't broke; break it!"  Think about all the videotapes you now couldn't give away because a VCR is old technology.  CD players also are becoming outdated.

What does this mean for historians and archiving?  My one-room school teacher program discusses things like the curriculum including "Penmanship."  At the end I hear regularly from grandparents talking about how they have had to teach their grandchildren how to write a signature and cursive writing.  When I learned it, we called it manuscript or just script.  When the name changed to "cursive" a joke went around that a parent wrote back to a teacher commenting on their child's "cursive writing" by saying "I don't know where they learned it, we don't use that kind of language in our home!"  Whatever you call it, thanks to the standardization of today's "Core Curriculum", it was decided students needed to learn to communicate using a computer instead.

Put in your search engine "research on handwriting and learning" and be prepared for a flood of studies saying you learn better by using handwriting.  Since at least 2011 this has been claimed.  To be fair, an opposing view appeared in the online science magazine, Nautilus, in an article by Philip Ball called  "Cursive handwriting and other education myths".  The article has generated a discussion so far with 177 comments.  Probably because of all this, local news media recently began noting the teaching of cursive writing was beginning to return to local school districts.

To repeat: What does this mean for historians and archiving?  Yes, it seems true what appears on the internet lasts forever.  Look at how the computer is always part of the evidence search in a criminal case.  Still the very transitory nature of a computer seems to say all our email eventually will go away.  Clean out the home of a dead relative and see how hard it can be to access a computer you don't know.  It should be part of your will that your heirs have digital access, but even then how many networks make it difficult to remove or post that the relative is now gone?

I manage the rights to the original songs and arrangements of a deceased aunt, Norma Andersen, who was quite active in the world of barbershop music.  I even created a website, Norma Andersen's Music, to help others find her songs.  Does that go against my often stated "rant" about Public Domain versus copyright laws?  No, because barbershop competitions require permission for choruses and quartets to perform a song.  Yes, I could donate her work to a national organization to manage, but past donations of some of her songs have shown they are not a priority there and are extremely difficult to locate.  I charge the same minimal fee ($50 USD) she charged while alive.  As my aunt explained "The donation for my music is intended to help people feel that they have 'something of value'.  . . . I only want others to respect this value, too."  I respect the value of her work, just as I try always to respect the value of the literary and graphic work of others here, getting permissions, giving credit as best I can.

The internet, however, only seems to keep online what is paid to stay up.  As the year ended I donated, and strongly recommend to you, donations to three sources of the archiving I mentioned:
I use all three here a great deal and believe in supporting them.  I also use and pay a foreign company called TinyPNG as they let me compress the pictures you see here so they open quickly.  Look at my blog from 2010 and I'm sure you will see the difference.  They provide a LOT for free, but I chose to support them precisely because I want to support them and those archived resources I mentioned.

So much on the internet still misses archiving.  Networks and mailing lists holding private discussion
are not on Archive.org's Wayback Machine, for example, or it displays only the part not requiring membership.  Will future historians have more difficulty than, for example, those who prowled the love letters of James Madison and his wife, Dolley?  With the way digital media keeps changing, such information may be unavailable.  This "belt and suspenders" storyteller who does so much historical storytelling fears it may and keeps "hard copies", too (a.k.a. paper).

But for now I am happy my blog has been a decade of information and stories; my computer is new; and this new decade is officially 2020, a term I hope proves true as shown in this logo from Downtowngrandforks.org. 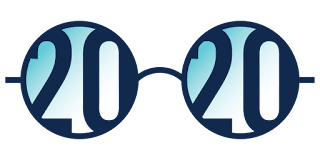 By next week I hope to be up to speed in the computer transition and once again providing my usual material here on Storytelling + Research = LoiS.