Cornplanter/Canfield - The First Winter - Keeping the Public in Public Domain

This is not the start of winter (thank heavens!), but we still have a lot of it left.  This past week I saw the first hopeful sign...the local parks have changed their sunset closing to half an hour later!  It means the days are finally a bit longer with more coming.  Winter is starting to leave -- HOORAY!  Okay, it's a long way until it's over, but it fits with today's story. 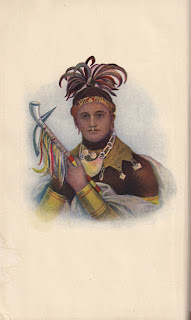 Recently I was able to purchase The Legends of the Iroquois which is officially listed as being written by William W. Canfield, but he attributes the source to "The Cornplanter", a Seneca who died in 1836 at the age of 104.  I have quite a few Iroquois books, including one by J.(Jesse)J. Cornplanter which is a reprint from Iroqrafts, so it is recognized as an important book to the Iroquois (originally published in 1938 and still under copyright because of renewal).  Jesse died in 1957 and was a descendant of the chief commonly called "The Cornplanter."  Jesse's father worked closely with the Seneca folklorist, Arthur C. Parker, whose books are starting to enter Public Domain.  The Seneca are among the five original (and still are) members of the Iroquois Confederation or League.  Their own name is the Haudenosaunee or "People of the Longhouse."  Living so long and training his son and Arthur Parker was not the extent of the Cornplanter's passing on of Iroquois folklore, so when I saw this book with its close reproduction of legends, I had to get it!

None of my half dozen other books include this story which matches my delight in the lengthening of daylight.  After the story I will include the notes accompanying the story, but first let it speak to us as we huddle in our "shorthouses."  (Yes, I made up that name, but the longhouses of the Haudenosaunee were perfect for this elder's passing along their traditions.)  Canfield explained it was during the last twenty years of his life the Cornplanter "recalled and told (the legends).  He did not speak of them generally, for he held them sacred, but reserved them for the ears of those in full sympathy with the people of which he was one of the last true representatives."  May you receive them with respect. 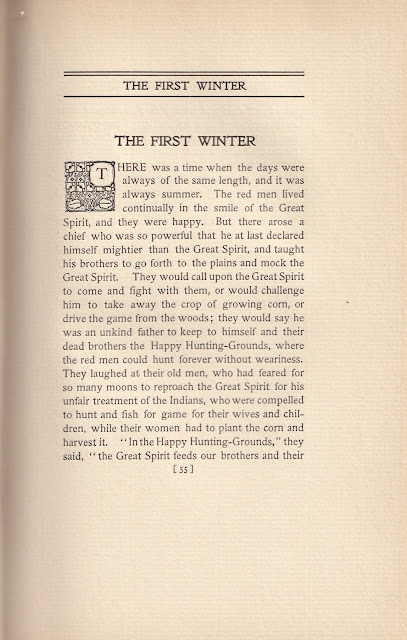 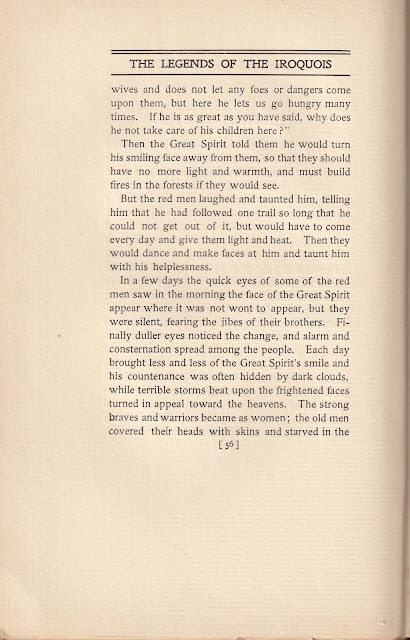 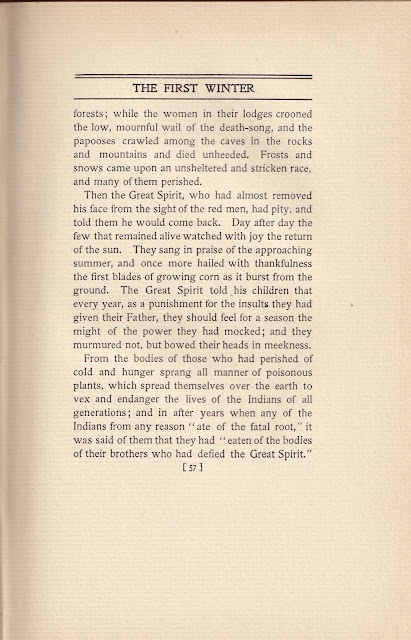 The notes show the work of William C. Canfield in interpreting and explaining the stories.  The type size in the Notes is truly the "fine print" so I will provide it here for your understanding and "full sympathy" with the Haudenosaunee values.


The Indians were taught never to speak ill of any of the celestial bodies or of the works of nature.  They must never complain of the glare and heat of the sun, lest they be stricken blind; nor must they complain of the clouds for fear that they might be shut up in caves in the mountains where no light could enter.  The moon must be treated with the same respect and consideration, for those who said aught against her were in imminent danger of death by a fall of rocks from the sky.  The most severe storms of wind, snow, frost or hail must be treated only with great respect.  Those who complained about them were by this act unarmed and could not resist their attacks and rigors.  In fact, they were taught to 'take the bitter with the sweet' without making wry faces.  This training through long generations rendered the race cold and stoical, apparently indifferent to suffering.  They probably suffered the same as others, but they bore it without a sign.  This legend was a very common one and was frequently told the young in order that the lesson might be deeply impressed upon them that they should never set themselves up in opposition to the Great Spirit or complain of the enforcement of his laws.

Canfield calls the legend "a very common one", but I find it interesting none of my other major Iroquois sources give it.  This is both a "pourquois" tale explaining how something came to be and a cautionary tale.  It does indeed offer lessons, but the trick is for the teller to avoid becoming "preachy", turning off the listeners.  The common saying about the weather is "everybody talks about it; no one does a thing about it."  This story shows an extreme our common grumbling, thank heaven!, doesn't create.  I plan to keep on grumbling, but am grateful something like this isn't caused by it.