A story has been haunting me as I look a bit ahead to Valentine's Day.  I knew the story's ending impressed me as a wonderful proof of love, but couldn't remember the story's source or even its country.  This wasn't as hopeless as it seems because I went looking in Margaret Read MacDonald's excellent reference book, The Storyteller's Sourcebook: A Subject, Title, and Motif Index to Folklore Collections for Children. -- Don't let that part about children stop you, this is definitely a story for mature adolescents and adults.  At the end I'll say a bit more about the motif index which helped me find it, but here are the many cultures that tell this motif in the order MacDonald gives them:  it is found in anthologies for Serbia, the Kirghiz (of Kyrgyzstan), Estonia, Czechoslovakia (when published still one country with no sign if the story is Czech or Slovak), Wales, Rumania, Poland, Russia, Netherlands, and Italy.  Stories do travel and clearly this has traveled from Central Asia and across Europe.

By the way, it's also a story loaded with riddles and that, too, is a common element in many stories.  I challenge you to try and answer them before seeing how the Clever Peasant Girl answers them.


I have many of the anthologies MacDonald cites and the best known version is probably Parker Fillmore's "Clever Manka" in The Shepherd's Nosegay; stories from Finland and Czechoslovakia, but both the original book and the story's reprint in May Hill Arbuthnot's Time for Fairy Tales Old and New are ex libris complete with library binding which preserves the book, but makes it hard to scan. 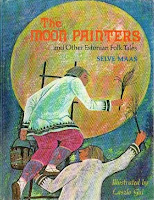 Looking further at those anthologies, another version rose to the top, the Estonian one.  I have long-time family friends who are Estonian American and also know later this month is Estonian Independence Day, so I checked my two books of Estonian tales.  The more recent (and still in copyright) The Moon Painters and Other Estonian Folk Tales by Selve Maas is a lot of fun, but it includes many of the same stories found in the older Fairy Tales from Baltic Shores; Folk-lore stories from Estonia by Eugenie Mutt.  The two books each give their retellings of "The Clever Peasant Girl."  The older volume also includes wide margins perfect for scanning as well as being a graphic gem with full color and small black and white illustrations and page design by Jeannettte Berkowitz -- although I quibble a bit with where the publisher inserted them. 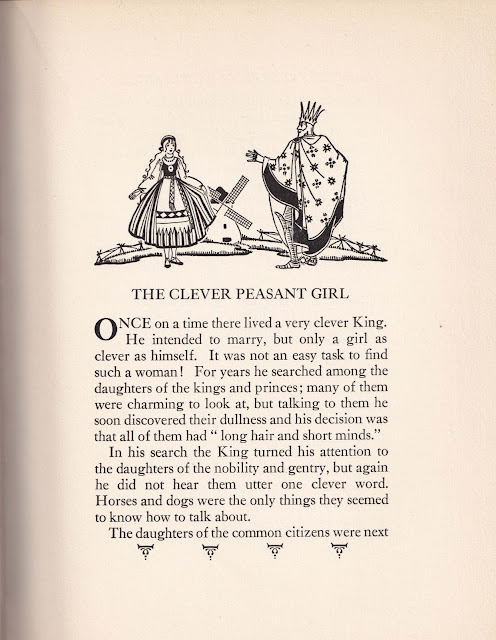 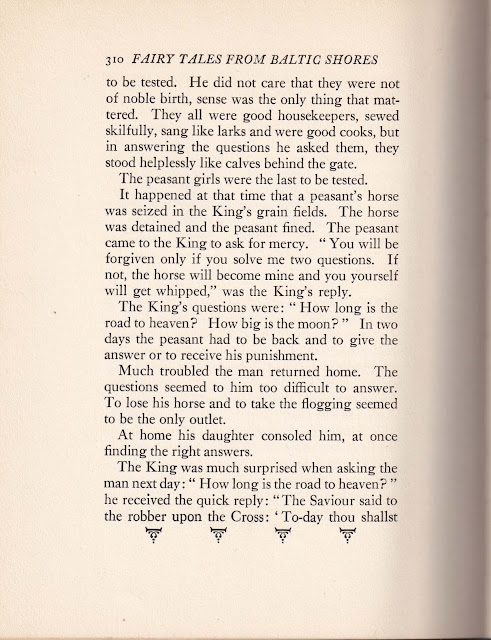 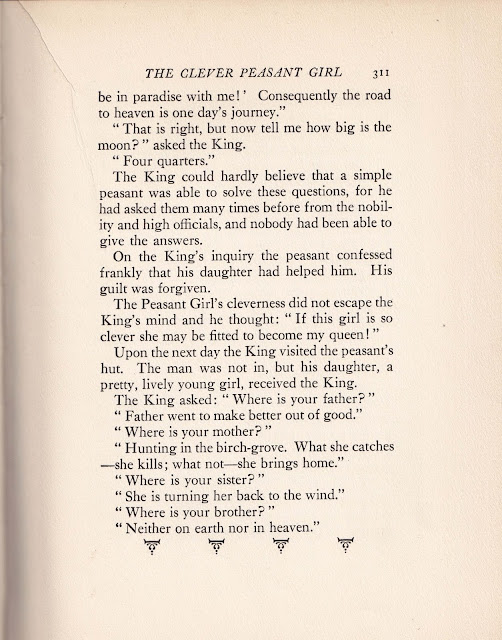 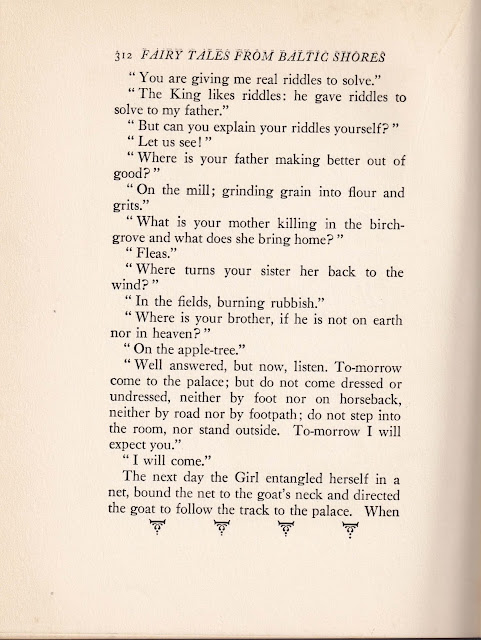 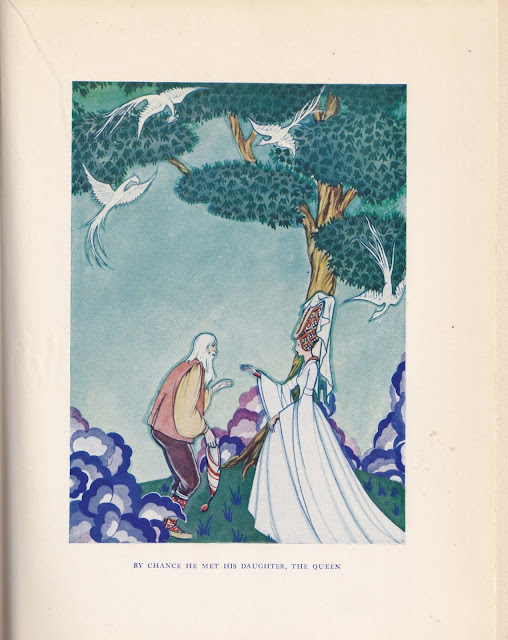 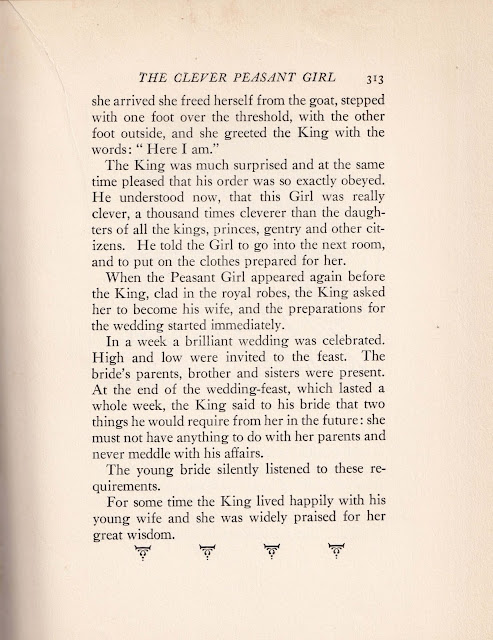 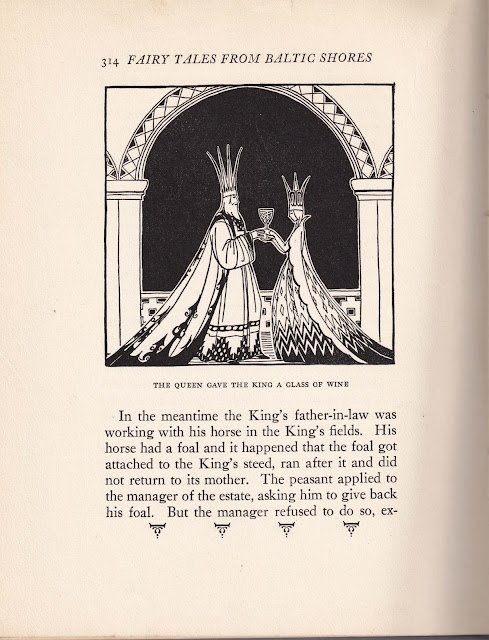 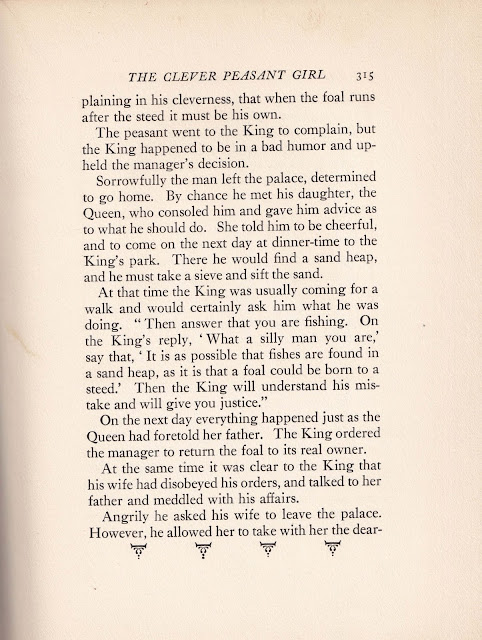 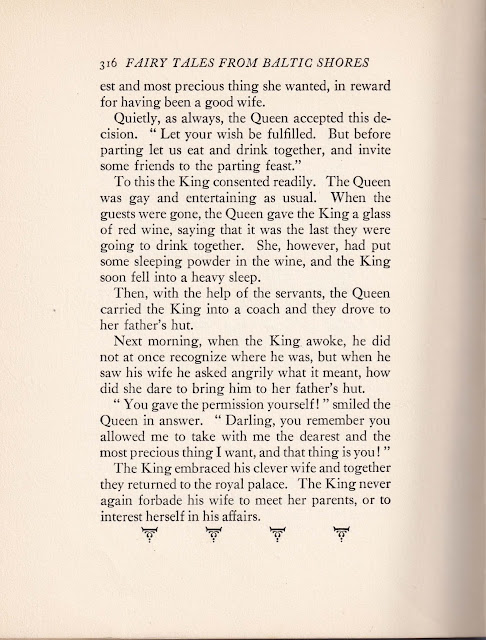 Now how did I find it and why did it seem so appropriate to me?  MacDonald used the Aarne-Thompson Motif classification to group types of stories.  The general group is J for "The Wise and Foolish" and I found J1545.4 "The exiled wife's dearest possession.  A wife driven from home by her husband is allowed to take her dearest possession.  She takes her husband."  I'll admit this clever wife found a more comfortable way than I seem to remember, but none of the other anthologies are in Public Domain, so I didn't read them for my faintly remembering she picked her husband up and carried him out on her back!  In this case an exiled Queen would surely not do that and would be allowed a coach to carry her and whatever she valued most.  ("Clever Manka" also had a wagon to carry out her burgomaster.)  Clearly whether it's used for love and Valentine's Day, Estonian Independence Day (February 24), or saved for Women's History month, it's a story worth Keeping the Public in Public Domain.

Not in Public Domain, but I've been given permission to post another Estonian tale I found online and wanted to use at the start of this month and the lunar New Year.  I hope that tempts you to return here for a humorous story which may have another application to the Year of the Rat.
**************************