I remember when talking about our family friends, the Vannaks, and their celebration of Estonian Independence Day, my younger daughter, Jamie said, "Stonia?  Who wants to go to Stonia?"

The country of Estonia may not be covered well in United States Social Studies classes.  (Rant alert:  Don't get me started on the whole topic of how the subjects of History, Geography, and Civics now are lumped together as one subject so that today's students receive less information in all three subjects!)  Estonia is a country east of the southern half of Sweden, but across the Baltic Sea and just south of Finland with it's smaller Gulf of Finland (and Estonians speak the second-most-spoken Finnic language) yet it touches Russia (the former U.S.S.R.).  That touch -- one of many centuries of foreign rule by Germans, Danes, Swedes, Poles, and Russians -- caused the most recent celebration which goes back to their brief independence after World War I.  They were definitely Vikings and I confess I can just picture the father, Vaivo, retaining that Viking spirit in his passion.  I fondly remember times with their family, including when the Soviet Union broke up enough for the Estonian Independence Day to truly be celebrated both in Estonia and their home in Toledo, Ohio.

What got me thinking about all of this again was, of all things, the terrible turn that the Lunar New Year took at the start of this month.  I mentioned earlier this month that one of the beliefs behind Chinese New Year is that whatever you do at the start of the year will keep recurring all year long.  The head of the US Centers for Disease Control and Prevention now believes this will prove true with the Corona Virus staying with us beyond this year.

Along the way while planning this month's possible responses to that unfortunate development I discovered an Estonian tale not in my Public Domain anthologies, but retold in a blog no longer produced, but was syndicated by Andrews McMeel Universal.  I originally contacted one of the authors, Amy Friedman, and she pointed me in their direction for permission.  She was sure they would grant it, but it took a while (rather like the development of the unfortunate virus now abbreviated as COVID-19, as it actually was first reported on December 31, 2019).  Fortunately we can sit at our computers and other digital devices and enjoy a tale stretching back to a style of story about silliness known as Noodlehead stories.  Let laughter and smiles still stretch around the internet with this bit of humor to celebrate Estonian Independence Day on February 24th.

Tell Me a Story by Amy Friedman and Meredith Johnson

by Amy Friedman and Meredith Johnson
Once upon a time, in a little village not far from Tallinn, on the Gulf of Finland, there lived a farmer whose name was Kalev. Kalev and his wife, Johanna, had many children. As time passed, their children married and had children of their own. After some time, the children began to ask their father who would inherit his farm.


The eldest child was Kati, and she thought the farm would be hers. But Paavo, the oldest son, said, "Shouldn't you pass your farm to me, your oldest son?"

The children began to bicker, particularly at the holidays when they visited. Over the meal, they talked as if Kalev was no longer there:

Kalev and Johanna listened closely, and late at night they talked about what would become of their farm and their children. Kalev was worried, for he did not know when he would die, and he had made no decision.

"I'll go see the Sage of Finland," he announced to his wife. "I'll ask him how many years I have to live, and then I will know when to decide."

"A wise idea," Johanna agreed, and so Kalev set off to see the sage.

The sage looked just once at Kalev, and he solemnly said, "You will know death has come when you have sneezed three times."

And as Kalev traveled back home, he was deeply saddened, for he could not stop thinking about sneezing. Just as he walked into his own yard, he froze. There was the honeysuckle vine, and the scent always tickled his nose. Sure enough, before he could stop himself, he sneezed.

He dared not tell Johanna the news, and so that night he avoided her questions, and early the next morning he set off for the mill to grind some grain. While he was there, working away, the dust from the mill tickled his nose, and he sneezed once again.

He sighed deeply. "Just one more left," he said under his breath, and he ran out of the mill as fast as he could.

Alas, the next morning he realized he had to pick up the sacks of flour he had left behind, and so he walked back to the mill. He walked carefully inside, lifted a sack, threw it over his shoulder and raced for the door.

He rushed out into the warm summer air, but his nose was full of dust. He knew he was going to sneeze. He tried to stop himself.

He inhaled and cried, "No!"

But it was too late. He let out an enormous sneeze.

He placed the sack upon the ground and groaned, "My time has come too soon!"

But he knew he must accept his fate, and so he lay upon the ground and stretched out. He closed his eyes.

The miller's hogs noticed the sack of flour upon the ground, and they rushed through the open gate to the sack and began to rip it open.

When Kalev heard their grunting, he turned his head, opened his eyes and looked at them.

He sighed deeply. "If I were alive, I'd punish you for this, you scoundrels!" he shouted. "Alas, I am dead."

And he closed his eyes.

The miller heard the grunting of his hogs, and he rushed outside to investigate. There he saw Kalev on the ground. He stood over him.

"Why are you lying here?" he asked. "How could you let the hogs go wild?"

Kalev opened his eyes once more. "What can I do?" he sighed. "I'm dead. If I were alive, of course, I'd drive away your hogs, but a dead man can only rely on those who are alive to do his will."

The miller reached for his whip and raised it over his head, preparing to flog his hogs, but when they heard the crack of the whip, they ran away.

The miller whirled that whip to the ground, and it grazed Kalev's arm. The jolt rushed through his body, and he sat up fast.

And feeling happier than he ever had, he heaved what was left of the flour onto his back and hurried home.

From that day on, whenever his children began to argue, he stood up and roared, "I'll hear no talk of death in my presence!"

Kalev and Johanna lived happily ever after for many more years.


This story:  TELL ME A STORY © by Amy Friedman & Meredith Johnson. Reprinted with permission of ANDREWS MCMEEL SYNDICATION. All rights reserved.

I know many of my readers enjoy a good story, so you might enjoy a trip to the Tell Me A Story archives.  You will see some years where Amy Friedman and Meredith Johnson no longer created the site.  It actually ran from August of 1996 to the end of 2017, so click on a year for more stories.  Nothing lasts forever, with or without sneezing. 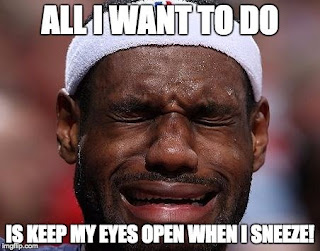