Just about everything that should be green has become green.  Kermit the Frog was known for saying "It's not easy being green" and until recently things were cold enough it was certainly true.  Then Michigan barely had time to flirt with spring when it leaped into summer with hot weather that popped everything out at once.  Purple seems to be everywhere!  One day it was the lilacs popping out, then my irises went from barely a bud to full-blown flowers.  Of course wildflowers started it with spring violets when the season was barely a hope. 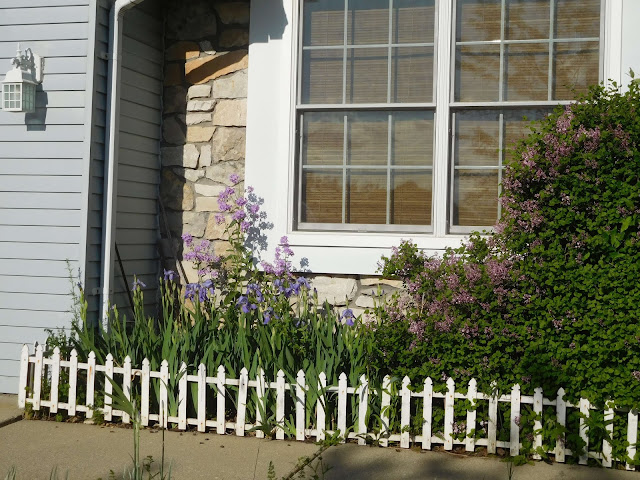 Here's a bit of my house with Korean Lilacs, Irises and a wildflower I first heard called "Mock Geraniums", but the useful search tool at MyWildflowers.com  has me believing it's probably called "Dame's Rocket" although there are several very similar wildflowers.  Whenever I see Irises I remember their strange other name of "Flags" and it sent me looking to find more about them.  It turns out there are enough mythological stories that I wound up with at least three versions of the story about the flower.

I decided to give all three versions and when I tell my own composite story would pick and choose from all three, leaving out some of the story.  You'll see what I mean and I hope from now on when you see an Iris you'll think of this early legend.

The simplest version comes from The Turquoise Story Book; Stories and Legends of Summer and Nature compiled by Ada M. and Eleanor L. Skinner, with this version credited to Ada Skinner. 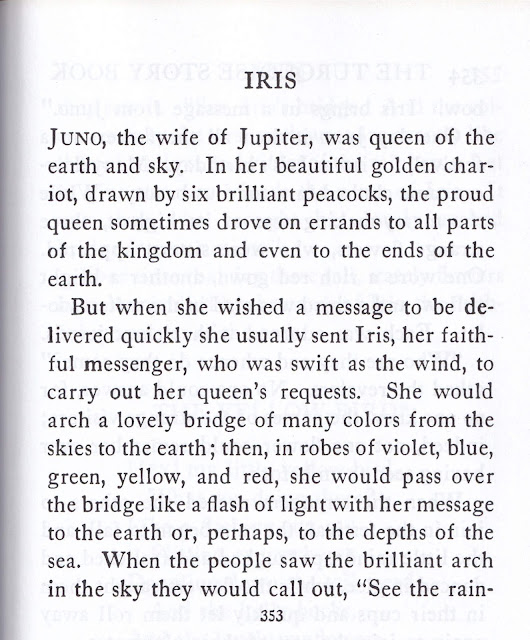 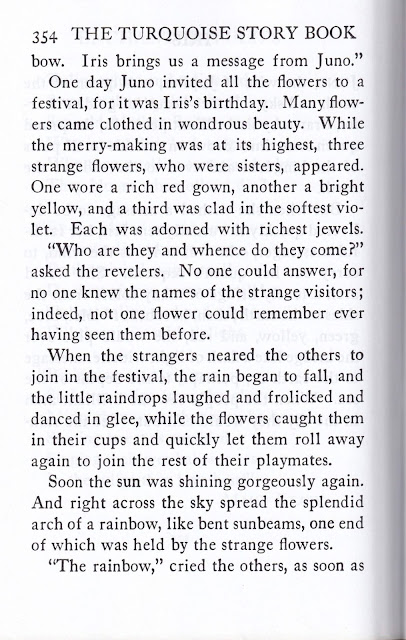 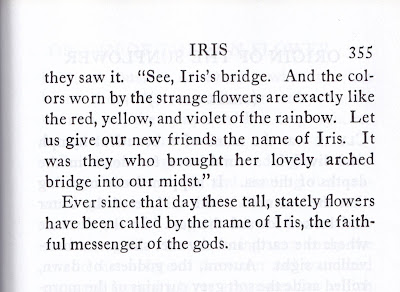 Another popular anthologist was Frances Jenkins Olcott and her book, The Wonder Garden; Nature Myths and Tales from All the World Over does a good job of crediting many sources, but doesn't mention a source for her story, merely calling it an "Old Tale," BUT her first page tells us new information about Iris and her origin. 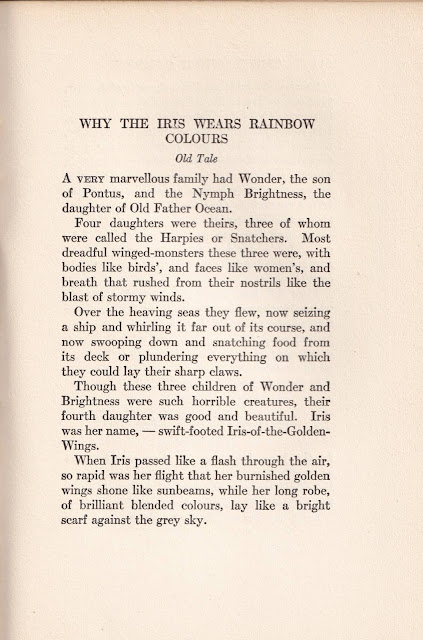 the second page gets more into the story as Skinner told it. 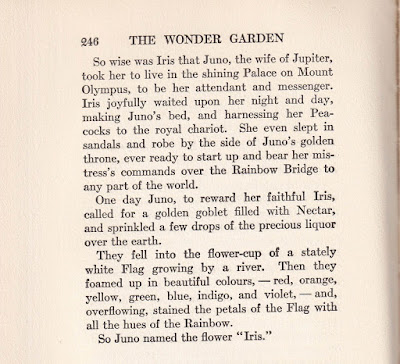 It's interesting that Olcott has one story in her book from Skinner's The Turquoise Story Book, but obviously felt it was necessary to give us Iris's background.  At the same time she simplified the story of the colors omitting the three flower sisters.

Finally I want to give Mary Catherine Judd's version which she retold "for Primary Pupils" in her Classic Myths; Greek, German, and Scandinavian.  The book opens with teacher suggestions, by the way, using examples of Phaeton for the sun, Diana for the moon, Jupiter for the stars, and a few tales for studying the winds and water.  She closes her 1898 edition of the book by inserting the Finnish myth of "Where Language Came From", adding a pair of Russian myths, and an Egyptian myth.  After the basics about Iris, she presents an interesting additional aspect of Iris.  I do have one caution to her book, but I'll give after her version of the Iris story.  Maybe you will guess it. 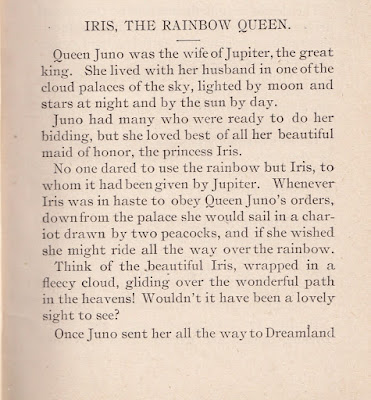 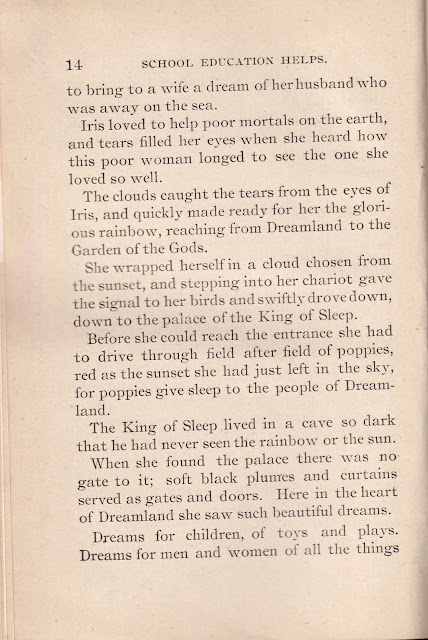 From here on it can get picky or sticky, so I'll understand if you don't feel like going beyond these three stories of Iris.  In fact it reminds me of this John D. Batten illustration in Joseph Jacob's Celtic Fairy Tales right before the section called "Notes and References" because it can get dry and complicated. 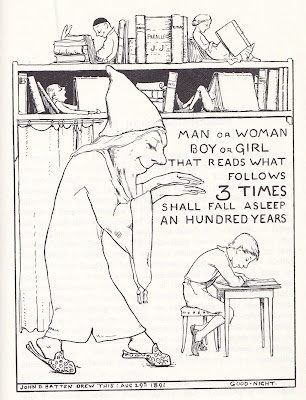 Classical mythology purists would probably say this is Roman and not Greek mythology, but the Romans managed to thoroughly intermingle their myths with the Greeks, causing sometimes the names to be changed and sometimes not.  Jupiter is definitely the Roman version of the Greek's Jove or Zeus.  I went to Wikipedia and found Juno's story oh so complicated.  Then I decided to see what Wikipedia could tell us about Iris herself.  Olcott's story of her family is completely discounted by a whole different family tree in Wikipedia's look at Iris.  It does mention the Harpies in relation to Iris turning back the Argonauts who pursued them, but not that they were her sisters.

By now I began to wonder if this tangled mess of a myth could be unraveled and went to some of the more standard works on mythology.  If you're interested or trying to make a complete story about Iris, it's really necessary to look further.  Fortunately I have reference works on hand even if libraries are closed.  First off I would challenge Wikipedia, because I did indeed find her sisters listed as the Harpies.  Olcott appears to be correct!  The simplest yet most thorough information is in Herbert Spencer Robinson and Knox Wilson's Myths and Legends of All Nations states:


Thaumas (whose name means Wonder) was the husband of Electra (meaning Brightness), one of the Oceanids (not the Electra of the Agamemnon story), and was by her the father of Iris, the beautiful goddess of the rainbow, and also father of the three Harpies, terrifying winged creatures representing the speed and horror of the storm.  The Harpies are mentioned as two or three -- Aello (Storm) and Ocypete (Swift-flyer); with Podarge (Swift-foot) sometimes added.

While a few sources say it should be Hera (not Juno) and Zeus (not Jupiter), putting it squarely back in Greek mythology, it is agreed with in Funk & Wagnall Standard Dictionary of Folklore and in Classical Mythology by Mark P.O. Morford and Robert J. Lenardon.  Interestingly Isaac Asimov in Words from the Myths doesn't deal with any of that as his focus is how the Greek word "iris" means "rainbow."   He goes on to talk about the multi-colored rainbow and how the word "iris" is applied to other objects having many colors including the colored part of the eye.  He goes on to mention the plant, calling it the flag, and that it, too, comes in many colors.  (His comments also go on to talk about how it led to the word "iridescence.")  I found it interesting that another standard look at mythology, The New Golden Bough by Sir James Frazer and revised by Theodor H. Gaster doesn't even talk about Iris.

****
WAKE UP!  Now surely some of this lodged itself in your brain and I hope you think of it when you see irises and maybe even the rainbow.
I was all set to end this story with that rainbow and then I saw this wonderful iris on a friend's Facebook page and knew this should be updated as her iris has that multicolored idea in one flower.