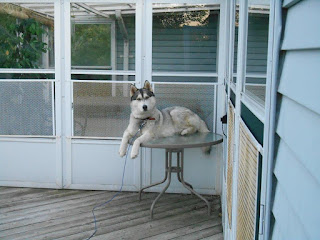 I call my husky/malamute my Exercise Machine, getting him out roughly every other day for at least a 45 minute hike.  Fortunately we live near several parks with wooded trails.  Ideas for this blog often come while on these outings.  It's a great time to observe nature and think about storytelling possibilities.   Summer clearly isn't ready to leave Michigan, but lately I've seen scattered signs of autumn as leaf color changes on a few vines and an occasional bush or tree exposed to colder damp air.

Most interesting, the wild grape vines. which until now were only good for chewing a bit on the tendrils, are starting to ripen. 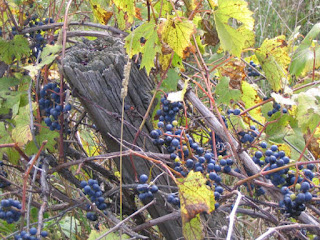 That picture came from an article on making "Wild grape wine"  from a blog called PA Wild Edibles.  The author has apparently kept the blog online, but it only ran from 2011-2014, offering ideas from his foraging in Pennsylvania.  I confess that foraging has long interested me.  Maybe my love of wildflowers and wild plants  is because I'm a terrrrrrible gardener.  For those of us interested in wild plants his blog is worth prowling.  I'm also impressed that anyone might be able to find enough wild grapes to make wine.  I love grabbing a cluster and nibbling one at a time.  It's guaranteed to have a seed to spit, possibly spreading more vines along the trail.

Besides spreading wild grapes, I want to spread this story the wild grapes made me decide to share.  Any fellow lovers of the "wise fool", the Hodja, will recognize its inspiration.  I set it in a tiny hamlet called Grape found in Monroe County alongside the River Raisin.  It's a Michigan area that welcomed French pioneers with plentiful wild grapes.

***********
Back when Grape was a flourishing community and not a mere spot in the road between Monroe and Dundee, a preacher was having an impossible time figuring out what to say in his weekly sermon.  He wracked his brain, but nothing seemed to work.  At last he decided what he would say.

That Sunday he stepped into his usual spot to deliver his sermon to his small congregation.  He looked at them all carefully, taking his time to be sure each person felt his gaze.  At last he spoke up.  "Good people of Grape, do you know what I have to tell you?"  He waited.  The people shifted in their seats uncomfortably.  "Well do you?" he repeated in a demanding tone.  They began to look at each other and shake their heads No.  "Well then, how can I speak to you?" he said defiantly, turned and went on with the church service.

The next week he again had no idea what to say in his sermon.  Again he stepped into his usual spot to deliver his sermon.  Again he called out, "Good people of Grape, do you know what I have to tell you?"  He waited.  The people shifted in their seats uncomfortably, but this time they shook their heads Yes.  "Good," he said, "then I have no need to say any more to you."  He turned and went on with the church service.

For yet a third week he again had no idea what to say in his sermon.  Again he stepped into his usual spot to deliver his sermon.  Again he called out, "Good people of Grape, do you know what I have to tell you?"  He waited.  The people shifted in their seats uncomfortably, but this time some shook their heads Yes and some shook their heads No.  "Excellent," he said, "then those of you who know should tell those of you who don't."  He turned and went on with the church service, but knew he really had to figure what to say in his next weekly sermon.
***********
As that story shows, it's rather like my storytelling friend, Laura Vitek, likes to say at the end of her emails, "There's always a story.  It'd be a shame not to tell it."

Similarly while prowling that PA Wild Edibles blog I found a recipe for sumac cider.  I've known staghorn sumac supposedly made a lemonade ever since I read it in the late Euell Gibbons' ground-breaking book on foraging, Stalking the Wild Asparagus, but lemonade didn't need my experimentation.  Cider?  Maybe.  It's certainly a year when orchards aren't opening for their usual autumn treat.

That leads me, good people on the internet, to ask you if you agree with my husband or me.  Should it always be Cider and Doughnuts or not?  Those of you who think you know, please be sure to say.  You can let me know either in my email or on Facebook where each week I also post these articles.