Primary Manual Work (Plus) - Keeping the Public in Public Domain

One of the things about live storytelling, especially historical storytelling, there's always more that can be said.  It reminds me of the final chapter of Peg Bracken's Appendix to the I Hate to Cook Book which she titled "Tail Gate, Shutting the; Now What Did I Forget This Time?"  This past week I was once again the One Room School Teacher, treating the board of the Iosco County Historical Society as if they were a local group considering starting a One Room School.  The program was live streamed and I've given permission for a clip from it for their website or their Facebook page. I'm not able to post it yet.  Volunteers work as their time permits, but will add it here when available.

Because everyone was wearing a mask, I acted as if I thought the Spanish Influenza might have returned.   This let me expand the program a bit to talk of how it affected their county (a 25% increase in deaths), how it had affected Michigan including soldiers at Camp Custer (nearly 700 deaths), and how President Wilson's refusal ever to discuss it led to deaths here and in the trenches of World War I.  I also mentioned his own stroke led to Mrs. Wilson being the undeclared first woman president.

Probably coverage of both Spanish Influenza and briefly women's suffrage made my omission of today's material reasonable.  Still I was sorry to leave out this aspect. 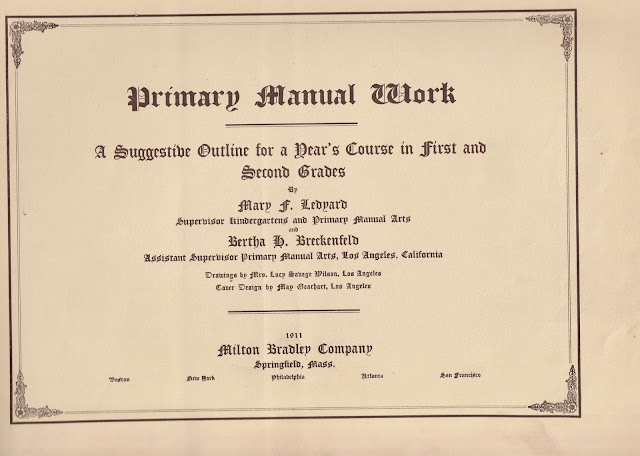 The term "manual work" refers to the crafts a teacher would use to supplement course work.  In this case it was for the public schools of Los Angeles, California.  While other instances of manual work can be seen online, this book is only available for sale at present.  The book might be interlibrary loaned, however, and the bibliography pages at the end are particularly worthwhile.  The example I wanted to include was the start of second grade when it was tied to Daniel Defoe's Robinson Crusoe.  With the interest in survival, it was interesting how it could tie curriculum elements together with this classic.

Second graders?!?  While one-room schools served roughly ages five to fifteen, U.S. second graders are approximately seven years old.  How could they handle Robinson Crusoe?  I grew up with "Classics Illustrated" comic books and wondered how much was eliminated, but here are two versions listed in the book's bibliography.  Robinson Crusoe for Boys and Girls and  An American Robinson Crusoe do a surprisingly good job of eliminating the more adult part of the classic.  The crafts essentially start where Crusoe began to establish his island survival home.  The first book opens that topic in chapter three, "Robinson in His New Home", while the other is chapter eight, "Robinson on an Island."

Later I'll point out some projects still used in crafts today.  Let's see how it is suggested. 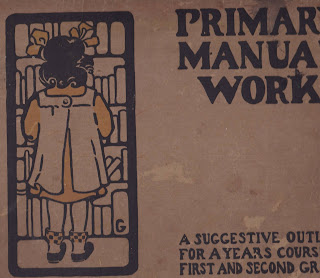 You'll notice the cover isn't completely shown.  This is because the book is 9 1/2" by 13 1/2" and I will need to add a little bit of what didn't scan.  Several of these projects are standard crafts worth using even without the Robinson Crusoe thematic work.

First the text and then the illustrations. 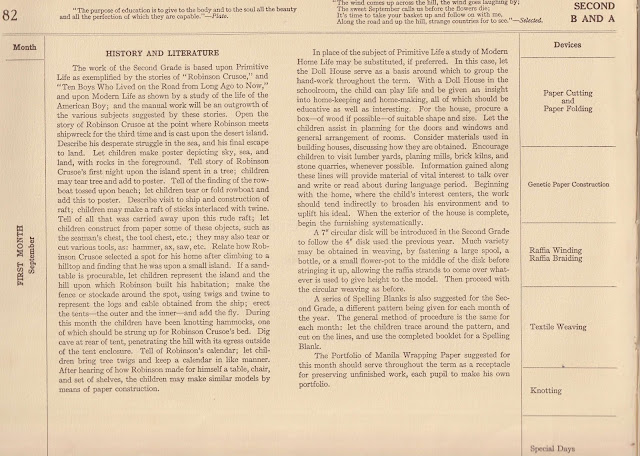 Notice the quotations at the top, including from Plato and the second page has the poet, Whittier. 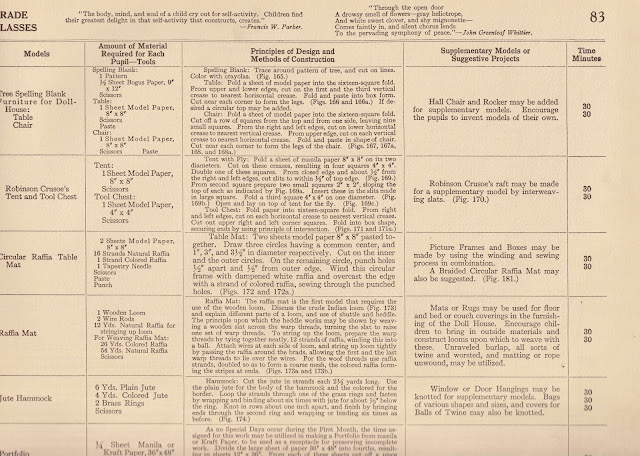 I believe most of the first column on the second page can be easily guessed with the possible exception of "Jute Hammock."  The definite exception is the material for "Special Days" where a "Portfolio" is suggested.  Since the text is not complete (and small) I'll give it all.  It also is a general idea useful throughout the year (and is first shown in the September of the First Grade).  The materials and tools are "1/4 Sheet Manila or Kraft Paper, 36"x48"; Paste; Scissors."  The third column says:


As no Special Days occur during this First Month, the time assigned for this work may be utilized in making a Portfolio from Manila or Kraft paper, to be used as a receptacle for preserving incomplete work.  Divide the large sheet of paper, 36"x48", into fourths, resulting in sheets 12"x36".  From each of these sheets cut off a square 12"x12", leaving sheets 12"x24".  Fold lower short edge up to within 4" of upper short edge.    Open.  Beginning at lower short edge, cut off strips 1"x10" from right and left edges.  Again fold on horizontal crease.  Fold over side flaps.  Fold down upper flap, cutting off the inch margins.  Paste side flaps.  (Figs. 93 and 93a)

Those figures were earlier in the First Grade material where they also made a Portfolio:
Nowadays a quick trip to the office supply store is probably how most of us would handle it, but it's interesting to know how it was done before that and could be made again.  The time would supposedly be 30 minutes.

Here are the two pages of examples, numbers 165 through 174 with a few explanations of what is cut off. 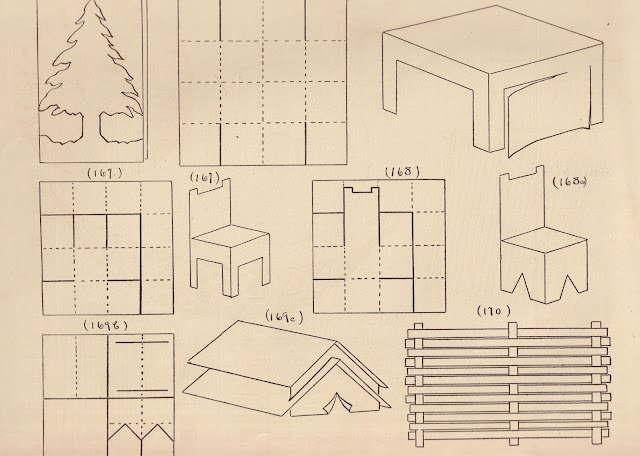 The top rows' numbers were cut off.  The Tree Spelling Blank is 165, the Furniture for the Table has 166 in the center and then 166a.  Number 169b is part of the tent with the bottom of the paper cut off when scanning. 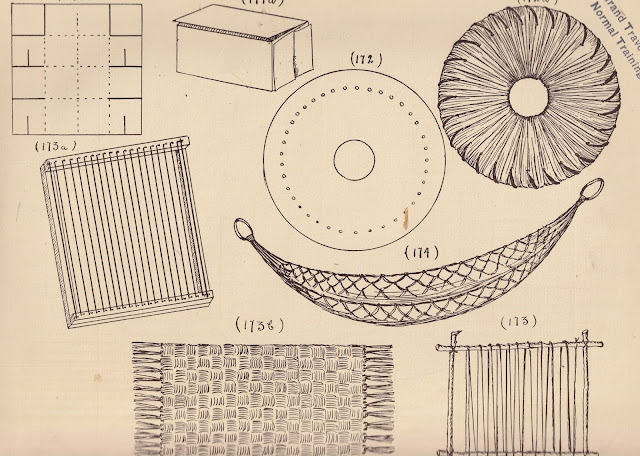 The top row middle is 171a for the Tool Chest and the upper right is 172a for the Circular Raffia Table Mat and that's certainly a craft idea worth using beyond the Robinson Crusoe projects.  The cut off of 173 and 173b are the sort of pot holder and mat loom projects you may remember from scouts or summer camps just like the Raffia Mat.  Robinson Crusoe's Raft, number 170, while not explained beyond being a "supplementary model by interweaving slats", should be recognized as something often made nowadays with craft or popsicle sticks to make a trivet.  Number 174, the Jute Hammock can be enlarged to make a hammock for things like toys or a catchall in the car or kitchen.

Bet you never realized those craft projects from summer camps and scout meetings were common even at the start of the Twentieth Century (and probably much earlier).  You also may note my copy of this book originally came from the Grand Traverse County Normal Training Class.  Normal today has other meanings, but back then said it fit "norms" or standards required in education.
******************

You can see why I recommend these to you. Have fun discovering even more stories!
Posted by Lois Sprengnether Keel at 5:31 PM