Westervelt - The Hills of Pele - Keeping the Public in Public Domain

Michigan's motto is "If you seek a pleasant peninsula, look around you", so I was surprised to find August 10 is the anniversary of our largest recorded earthquake (4.6 magnitude).  I looked that up and find it's considered light magnitude with only minor damage.  I grew up in Missouri where the New Madrid Fault (pronounced with the accent on the "Mad") is a major earthquake zone with the possibility of serious damage believed likely.  This made me look for earthquake stories from the most earthquake-prone states.  Those are the states of California, Alaska, and Hawaii.  A small book ages ago caught my eye, Hawaiian Legends of Volcanoes, by William Drake Westervelt.  I've never been to Hawaii, but confess it's interesting folklore has produced several stories I enjoy telling, so I bought it and was surprised to find it includes considerable detail on what was known about vulcanology in the early 20th century.  Looking up Westervelt was also a bit surprising as he authored five books and many articles on Hawaiian mythology and folklore.  That might not be too surprising since he held several offices in the Hawaiian Historical Society, but he was a minister from Ohio, who clearly fell in love with his adopted home and tried to faithfully represent the Hawaiian viewpoint in the legends he collected and translated.


Hawaii's earthquakes and other geological matters all seem to go back to their volcanoes.  Pele is the Hawaiian volcanic goddess.  Westervelt's story introduces us to her and also to an ancient Hawaiian sport reminiscent of surfing, but done down the side of a volcano!  There's an interesting article in Hawaii Magazine about reviving Holua sledding which goes 50 to 80 mph down the side of a volcano where wiping out can also remove your skin on the lava rocks.  Grass hillsides are now more common.  The sleds are long and narrow, and it's up to the daring of the sledder if you do it lying down, kneeling, or standing up.  Here's a video of it before we see it in the story. 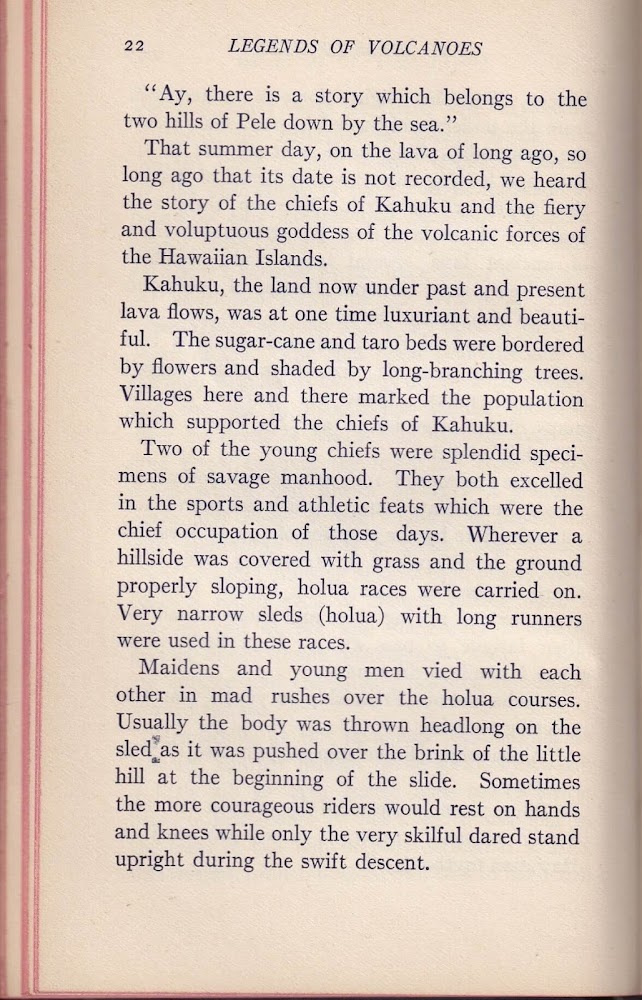 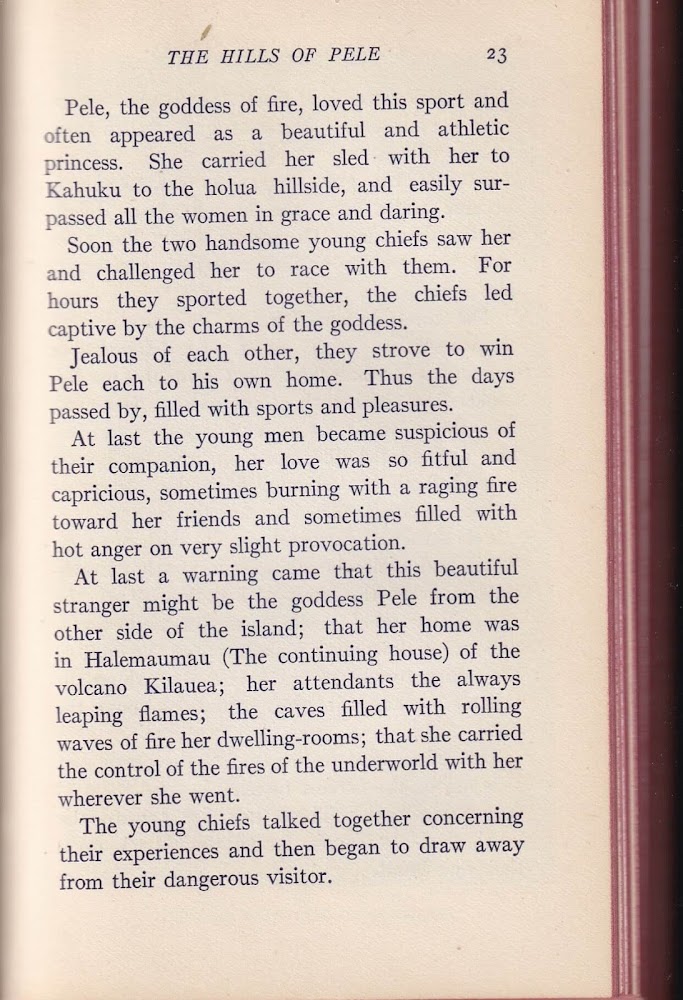 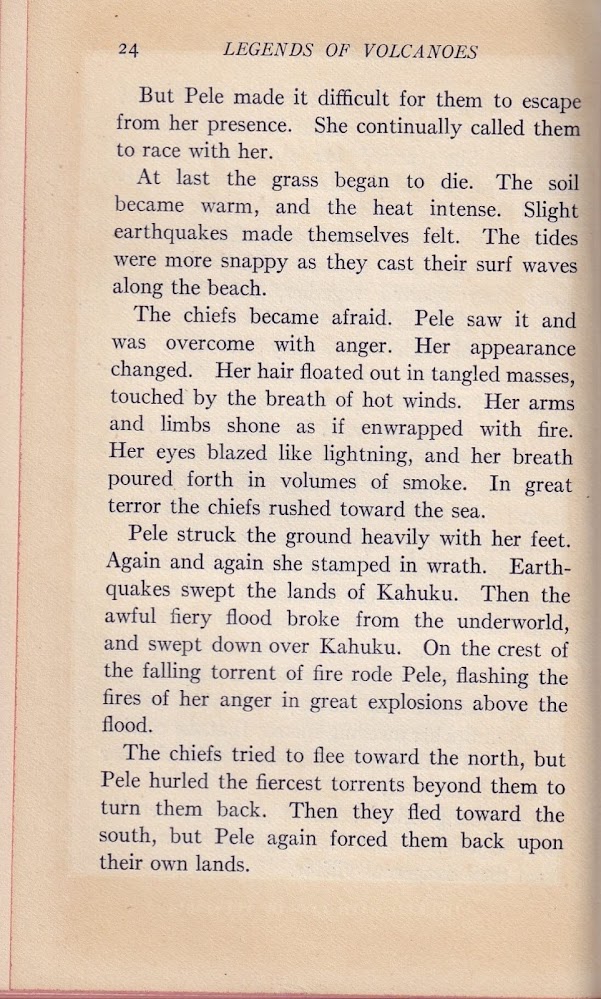 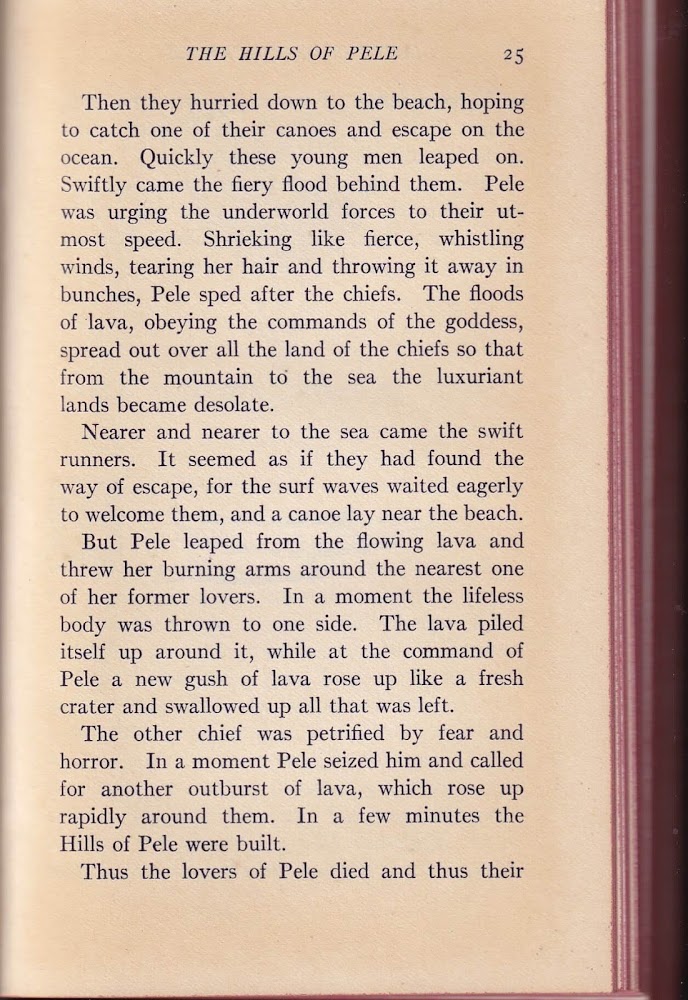 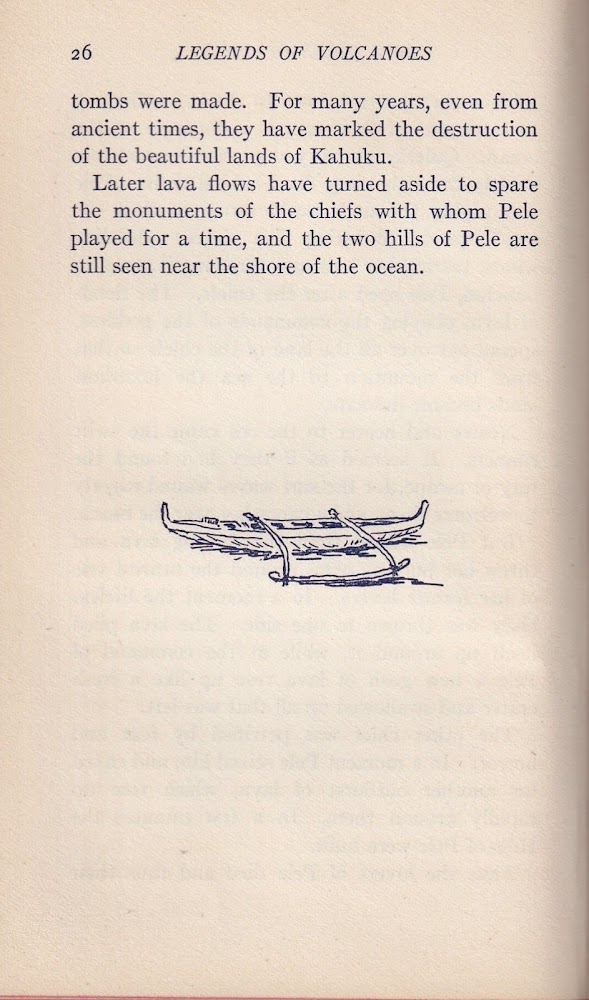 Normally I would include any illustrations, but a beautiful Hawaiian girl is shown in the middle of the story.  Do you recall the story talking about "Her appearance changed.  Her hair floated out in tangled masses, touched by the breath of hot winds"?  There is a thin volcanic fiber known as Pele's hair and it's golden color.  Besides that factual Wikipedia article, The blog, The History Girls, has pictures of it and also retells Westervelt's story. 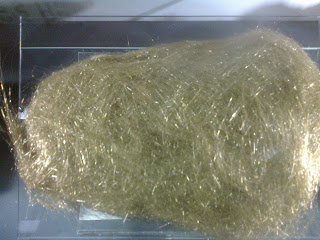 I agree with them, it looks very much like the hair you might find in a hairbrush.  Just remember if you find some (it's not only found in Hawaii, but on other international volcanic sites) it's both fragile and can cut you.

The next story in Westervelt's book is "Pele and the Chiefs of Puna."  I doubt he drew the book's illustrations, but no illustrator is listed.  This is the illustration of Pele for that story. 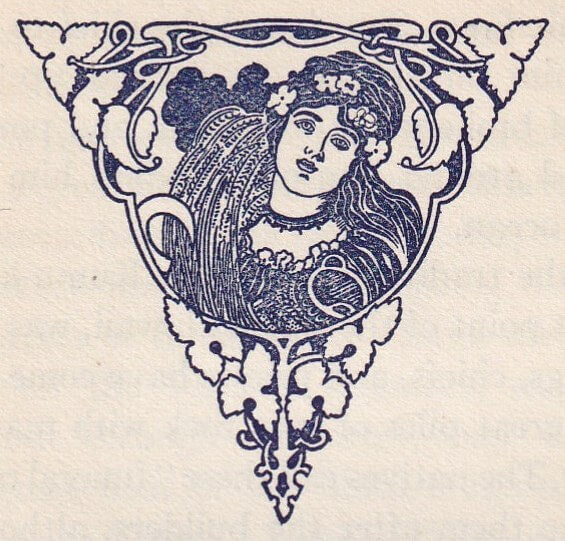 I've seen various illustrations and altered photos using lava either red or black for her hair, but that art nouveau shows how she might start out fooling some young athletes before revealing her true nature.

The only other note about this story is that the two symmetrical mounds of lava called "The Hills of Pele" were still visible in 1916, but no longer exist.  Pele is always reshaping Hawaii.

The current pandemic has shaken our world up enough.  May Michigan's peninsula remain pleasant and all of us earthquake free.
*****************************
This is part of a series of postings of stories under the category, "Keeping the Public in Public Domain."  The idea behind Public Domain was to preserve our cultural heritage after the authors and their immediate heirs were compensated.  I feel strongly current copyright law delays this intent on works of the 20th century.  My own library of folklore includes so many books within the Public Domain I decided to share stories from them.  I hope you enjoy discovering new stories.