Cemeteries can be interesting places to walk and it's even more so when you know something about the people buried there.  This Saturday I will again serve as a guide at Pontiac's historic Oak Hill Cemetery and then next month will be involved with Clarkston's first ever cemetery walk at Lakeview Cemetery.  Both are fundraisers for cemetery improvements.  You might think it's a case of plant the body and forget it, but there's much more needed than a simple lawn mowing as time goes on.

Next month I'll say more about the Lakeview renovation going on (especially tombstone cleaning on the second Saturday of the month in the morning from 10 to noon!).  Oak Hill this year will focus on the Great Migration, which transformed our region as thousands of families came to Pontiac, Detroit, Flint and beyond for booming automotive job opportunities.  I hope you can come see how Pontiac was once a magnet for people to come for jobs. 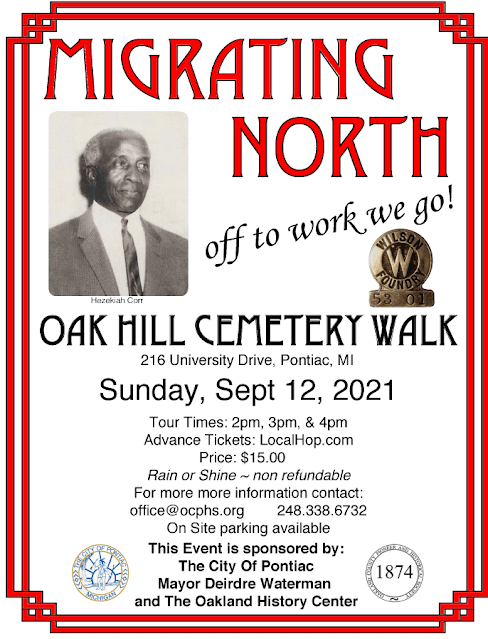 While thinking about cemeteries, my thoughts turned to a book I recently acquired, Tales of Nasr-Ed-Din Khoja by Henry D. Barnham.  There are five stories about the Hodja (that name is transliterated from the Turkish in several ways) that might work BUT the book is an old, 1923, paperback that wouldn't be treated well by pressing it down against a copier and some pages have very little space in the "gutter", the center area between two pages.  You may have noticed some of my reproductions are more professionally done and it's because I can find the book online at either Project Gutenberg or Archive.org.  This saves my books and also gives additional stories from its original volume.  Unfortunately Tales of Nasr-Ed-Din Khoja doesn't yet appear online except to buy.  Barnham published it in Britain and even with the U.K.'s switch to copyright coverage of 70 years after the death of the author, the book is now Public Domain.  According to the British Library catalogue Henry Dudley Barnham was born in 1854.  Tracking him down genealogically at MyHeritage, he died in 1936.

<SIGH!>  WorldCat shows the book is owned by six U.S. academic libraries near me and a total of 82 worldwide, even in Australia.  I would love to have this book online to save my own copy.

I was able to find two Hodja books at Project Gutenberg.  Using "hodja" I found a book I've long known, Told in the Coffee House: Turkish Tales by Cyrus Adler and Allan Ramsay.  Unfortunately, while it does include many Hodja tales, I didn't find anything related to cemeteries.  Using "khoja", however, I discovered a new-to-me book, Miscellanea by Juliana Horatia Ewing, which contains indeed a "miscellanea" including 52 brief tales about the Hodja, who she explains as "A Khoja is a religious teacher, and sometimes a school-master also."  Another name for his title people might recognize is "Imam."  The tales might benefit from modern editing, but one Hodja tale that fits today's topic and is fairly well known is #25, "The Khoja Peeps Into Futurity."  Most are illustrated, but credit to the illustrator is almost buried in the preface to this book, which combines several of her books, saying "written after Mrs. Ewing's marriage, with the help of her husband; he supplied the facts and descriptions from things which he had seen during his long residence abroad. Colonel Ewing also helped my sister in translating the Tales of the Khoja from the Turkish. The illustrations now reproduced were drawn by our brother, Alfred Scott-Gatty."

Tale 25.—The Khoja Peeps Into Futurity.

Having need of a stout piece of wood, the Khoja one day decided to cut off a certain branch from a tree that belonged to him, as he perceived that it would serve his purpose.

Taking, therefore, his axe in his hand, and tucking his skirts into his girdle, he climbed the tree, and the branch he desired being firm and convenient, he seated himself upon it, and then began to hack and hew.

As he sat and chopped a man passed by below him, who called out and said, "O stupid man! What are you doing? When the branch is cut through you will certainly fall to the ground."

"Are the decrees of the future less veiled from this man than from me, who am a Khoja?" said Nasr-ed-Deen Effendi to himself, and he made the man no reply, but chopped on.

In a few moments the branch gave way, and the Khoja fell to the ground.

When he recovered himself he jumped up, and ran after the man who had warned him.

"O you fellow!" cried he. "It has happened to me even as you foretold. At the moment when the branch was cut through I fell to the ground. Now, therefore, since the future is open to thee, I beseech thee to tell me the day of my death."

"This madness is greater than the other," replied the man. "The day of death is among the hidden counsels of the Most High."

But the Khoja held him by the gown and continued to urge him, saying, "You told me when I should fall from the tree, and it came to pass to the moment. Tell me now how long I have to live." And as he would not release him, but kept crying, "How much time have I left?" the man lost patience, and said, "O fool! there is no more time left to thee. The days of the years of thy life are numbered."

"Then I am dead, lo I am dead!" said the Khoja, and he lay down, and stiffened himself, and did not move.

By and by his neighbours came and stood at his head, and having observed him, they brought a bier and laid him on it, saying, "Let us take him to his own house."

Now in the way thither there was in the road a boggy place, which it was difficult to pass, and the bearers of the bier stood still and consulted, saying, "Which way shall we go?"

And they hesitated so long that the Khoja, becoming impatient, raised his head from the bier, and said, "That's the way I used to go myself, when I was alive."

I don't expect any of the residents of Oak Hill Cemetery to correct us on what they did while alive nor where they expected to be buried.  Come on out if you can.  If you can't, at least the Hodja gave you a smile once again.