For a variety of reasons stories from Afghanistan may need telling.  I don't have any Public Domain resources, but that doesn't prevent telling those stories as long as they aren't electronically published.  I do have four books with twice as many stories that I should be able to give here the "bones" of their stories.  The books should be available either as used books or by interlibrary loan as they are in fairly standard anthologies.

This photo by EJ Wolfson on Unsplash gives a good view of Afghanistan beyond the cities. 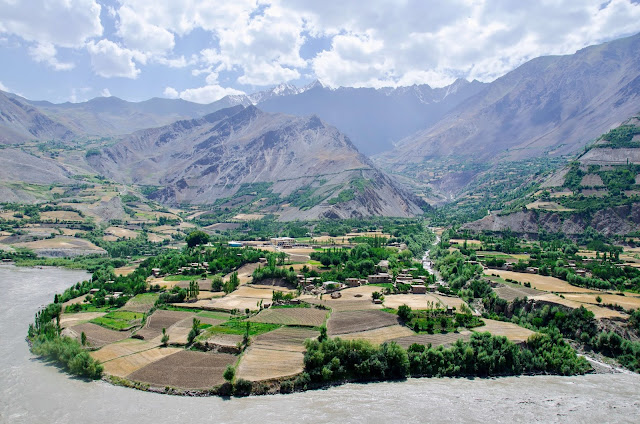 Before opening the four books, it never hurts to get an overview.  Here's a slightly compressed version of the introductory paragraphs in the Wikipedia article on Afghanistan.

Afghanistan is a landlocked country at the crossroads of Central and South Asia. It is bordered by Pakistan to the east and south, Iran to the west, Turkmenistan and Uzbekistan to the north, and Tajikistan and China to the northeast. The country is predominately mountainous with plains in the north and southwest. It is inhabited by mostly of ethnic Pashtuns, Tajiks, Hazaras, and Uzbeks. Kabul serves as its capital and largest city.

Human habitation in Afghanistan dates back to the Middle Paleolithic Era, and the country's strategic location along the Silk Road connected it to the cultures of the Middle East and other parts of Asia. The land has historically been home to various peoples and has witnessed numerous military campaigns, including those by Alexander the Great, Mauryas, Muslim Arabs, Mongols, British, Soviets, and in 2001 by the United States with NATO-allied countries. It has been called "unconquerable"[13][14] and nicknamed the "graveyard of empires",[15] though it has been occupied during several different periods of its history.

These are the four books I recommend:

It's interesting that the stories tend towards Trickster tales.  Bulatkin's "The Hare and the Tiger" has an aging tiger forcing the forest creatures to sacrifice one of themselves daily until hare avoids his day to become the tiger's meal.  The next day he claims to have been captured by another tiger even more powerful.  The enraged old tiger wants to be shown the braggart.  Hare says he lives in a nearby well.  Takes the tiger there.  Tiger is fooled when he sees himself reflected in the well.  Jumps in and drowns.

Protter has a common theme of two brothers, with the older one accepting a job with the promise he will do all the hiring farmer requires without losing his temper or he will be penalized.  The farmer in turn promises he will pay the penalty if the worker makes him lose his temper.  The older one becomes trapped by this, but the younger brother rescues him by an even stricter agreement that ends in the farmer losing his temper and learning to treat his workers fairly.  As I said, the theme isn't new, but it is extremely well done.

Professor Dorson was noted for his work in folklore and his use of standard storytelling motifs makes it possible to summarize each of his tales in that way.

The story by Carpenter, "One Mean Trick Deserves Another" is a good ending piece somewhat similar to Protter, but where the foolish son is tricked out of selling the family's nanny goat by a family of six brothers.  The boy's father is so clever that he is called Assad the Wise and manages to trick each of the brothers in turn into paying him a lot of money and ultimately getting a judge to give Assad all they own and kick them forever out of town.

Fellow storyteller from Canada, Norman Perrin, added to these books with this additional information:

When Norman mentions Four Winds Storytellers Library, it's a 6,000 volume collection of folktales from around the world, as a free research resource that has aided storytellers, authors and other researchers since 1990.

That leads me to this photo by Firoz Sidiqy on Unsplash showing a "goodbye" from Afghanistan's youth, especially girls, from earlier in this century. 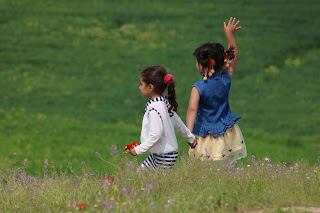