Thursday I had a surprise phone call from a school district wanting me to do a program...the next day!  Northville Schools annually produces Heritage Day for their third graders, both public and private schools looking at Victorian times.  It's part of their annual Heritage Festival.  Covid hit the gentleman who works at Greenfield Village and would normally have been their storyteller.  Could I do it?  My website and various directories mention that I do a LOT of historical storytelling.  Victorian?  I do a Hired Girl from Victorian times, but she's usually talking about how here in the United States we celebrated a Victorian Christmas.  Hmmm.  September is a long way from Christmas.  I decided it was best to present as the One-Room Schoolteacher who had tales of schools from long ago.

Five groups of roughly 100 students each heard a 20 minute version of the sort of stories and facts from that time a teacher might share with today's children.  It was fun and I was delighted to introduce them to a past their grandparents or great-grandparents may have experienced.  It made me realize I want to tell more of the stories, all Public Domain, that might have been told to students by a teacher in a classroom, but this time, with only 20 minutes, it was better to explain what a One-Room School was like.

On my own, I found myself thinking back to the pandemic of 100 years ago.  I couldn't present it this time as that was a bit after their focus on the Victorian era.  When I see masks, I've asked at times my adult historical audiences, if the Spanish Influenza  has returned!?!  With my Third Graders, since it was so hard to hear their small voices normally and, even worse, with a mask, I said they all looked like they were going to rob a bank!  They really were quite good with their masks and enjoyed the comparison.

Still I found myself wondering about schools during the Spanish Influenza.  I'd never learned about that aspect of the previous century's pandemic.  I especially wondered about Michigan schools, even though there was good coverage and comparisons about schools on the national level.

A while back for those earlier historical programs I had learned (not sure about the original sources):

By mid-October, the governor and state health department ordered the closing of churches and "places of public amusemënt," from movie theaters to saloons.  Many communities also closed schools.  After those establishments were re-opened in November, deaths went up in December.

While I have specifics about the death toll throughout the state (first hitting urban centers, but eventually spreading throughout the state) that was as far as my knowledge covered the schools, summarized as "Many communities also closed schools."  When doing a historical program in an area, I research local coverage (such as when presenting my current Prohibition program).  Many cities have coverage about how they were affected by the Spanish Influenza.  Even the little town of Pullman, for example. 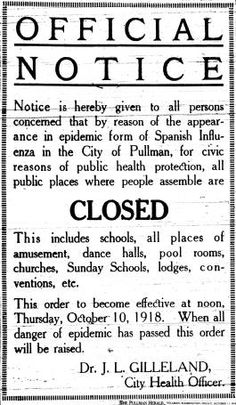 Not just Sunday Schools but the regular schools.  At the other size, Hour Detroit did a timeline of how it played out in Detroit and went from

Gov. Sleeper orders the shutdown of “theaters, movies, churches, lodge meetings, political gatherings and all gatherings which can legitimately be construed as non-essential,” the Free Press reports. Schools remain open.

Detroit schools are closed, and 56 deaths are reported in the city. Nearly 3,000 teachers are reassigned to “work visiting homes of influenza sufferers and advising in their care,” the Free Press writes.

By mid-October, the epidemic was alarming enough that the state Board of Health and Gov. Albert Sleeper issued an order closing all churches and "places of public amusement."

"There was a lot of push back about closing the saloons and, to a lesser extent, the churches," Navarro said.

Schools were exempted in the state order, but many local officials made that decision on their own, including officials in Detroit.

Of course M Live reports about University of Michigan a great deal.  While I encourage people to look up online information on how specific Michigan cities and villages decided, there's a wealth of information about the University of Michigan (and a bit on Ann Arbor).  Michigan Today is the official university blog.  It tells why the university stayed open rather than let students return home and spread disease or stay in Ann Arbor without classes, gathering at the many restaurants and other spots.  The university did cancel football, however.

Beyond that the university used its resources, including buildings and people (the SATC was the World War I version of the ROTC):

October 11. The old Michigan Union building on State Street — originally the home of Judge Thomas M. Cooley, dean of the Law School — is converted to an infirmary to handle the overflow from University Hospital, the Homeopathic Hospital, and St. Joseph Hospital. Another infirmary is set up in Barbour Gymnasium to house SATC members with only mild symptoms.

October 15. Eight die, including five in SATC. Ralph Smith, an Ann Arborite in the corps, dies of a hemorrhage in the lungs; he’d first reported sick at reveille only the day before. Three sisters of Chi Omega are diagnosed. Seniors in the Medical School are assigned to care for the sick. Many SATC men are confined to their quarters, awaiting diagnosis.

“It is like the Hun,” says an SATC sergeant-major. “Either you down him or he gets you.”

“Squads of men loaded with trays of steaming food hastening through the streets at a gallop have become such a common sight that citizens have ceased to turn and stare,” the Daily reports.

While university students should be more capable of handling mask requirements, even then it was controversial, including among the military who were heavily impacted.  Camp Custer had devastating deaths here in Michigan as a preview before it killed in the trenches of World War I.

(Remember masks then were made of gauze.) 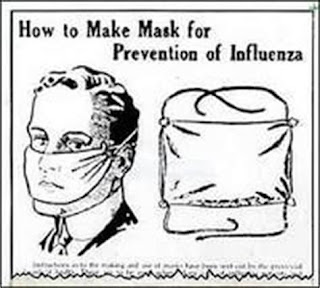 October 17. With six to 10 deaths each day in the SATC alone, U-M President Harry Burns Hutchins directs students and faculty to wear face masks at all times. Red Cross volunteers move into the President’s House to sew masks for distribution across the campus starting at seven the next morning. Captain B.C. Vaughan, medical officer of the SATC, says the masks may do more harm than good, since students are unlikely to use and wash them properly. Dr. W.E. Forsythe, head of the University Health Service, says masks are essential to containing the spread.

I hope you enjoyed this historical look at similar times.  I imagine there were Substitute Teachers called, even as I was a last minute Substitute Storyteller.