If ever there was a time for stories of Light, Hope, and Working Together it is now.  School shootings and threats, tornadoes upending whole lives, the pandemic are only some of the reasons, but they're big ones.

The terrible events of the shootings at nearby Oxford knocked off any possible Hanukkah stories for this year.  Yet if that celebration is called a "Festival of Light", certainly light is needed at this time.  Looking for stories about light took me to tales of how fire was given to people.  Our long ago ancestors recognized the hope fire brought.

There are many stories about this, but the one I found came from a book I had dismissed because of its title which seemed to have little authenticity: American Indian Fairy Tales by Margaret Compton.  The failure to note the tribal background made me even more hesitant.  Then I noticed in the introductory pages Compton's "Author's Note" to her 1895 book:

Through the courtesy of the librarian of the Smithsonian Institute, the author has had access to government reports of Indian life.  Upon these and the folk-lore contained in the standard works of Schoolcraft, Copway, and Catlin these stories are founded.

As for Compton, via library cataloging notes, I learned she lived from 1852-1903, but nothing more.  There probably exists genealogical information, but her literary information hasn't made it to the internet.  I'll give more background to the story after letting it stand on its own.  I particularly appreciate that, while it is yet one more trickster tale about the mythical Coyote, in this version it requires a group willing to risk their lives.  (Compton also tacks on two very brief Coyote anecdotes, showing his less benevolent nature.) 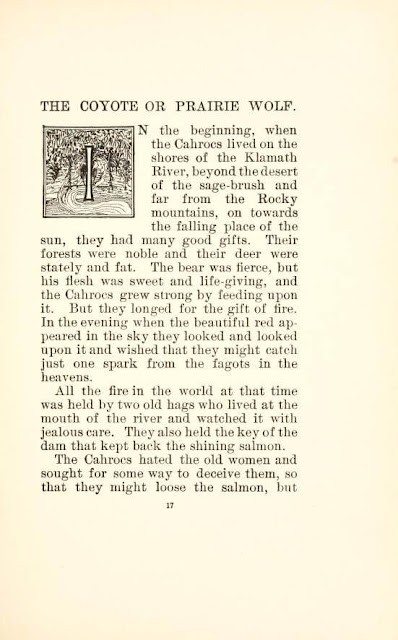 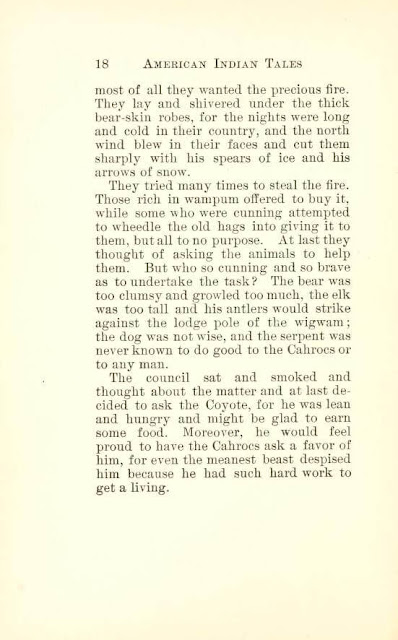 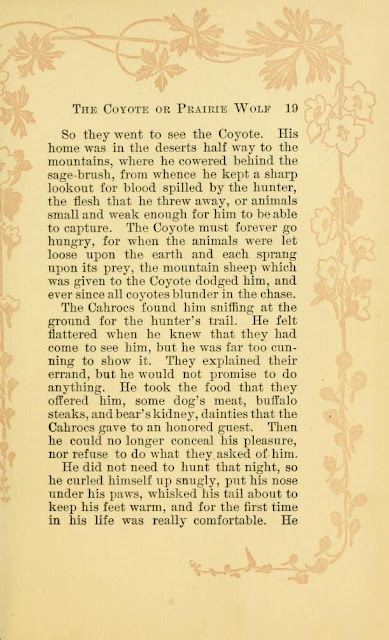 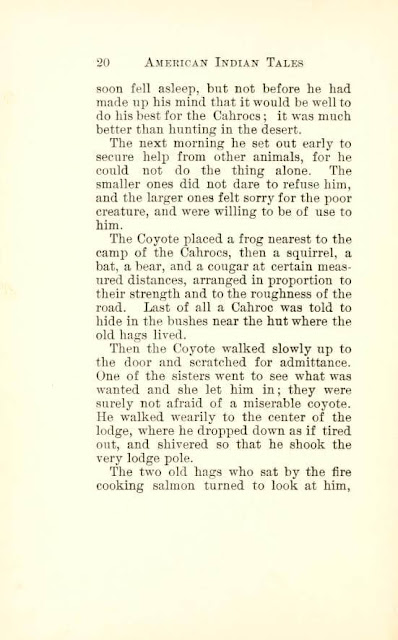 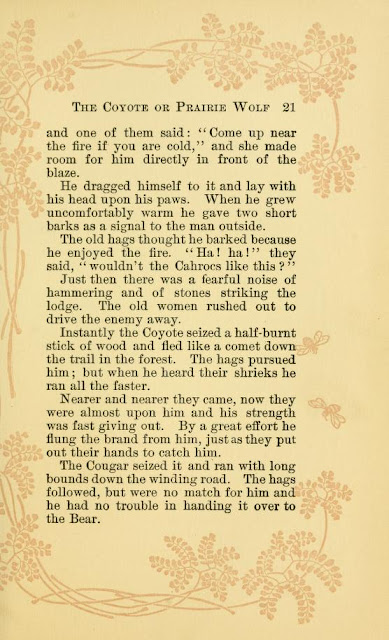 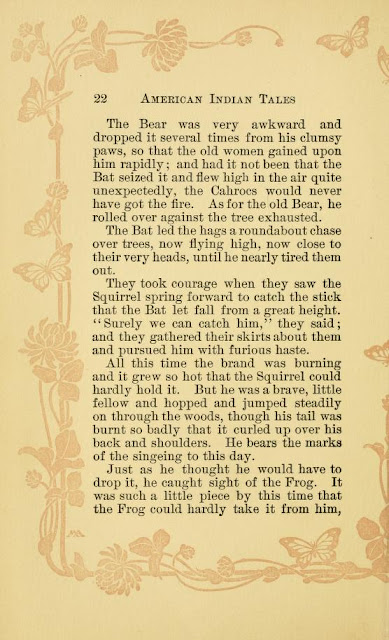 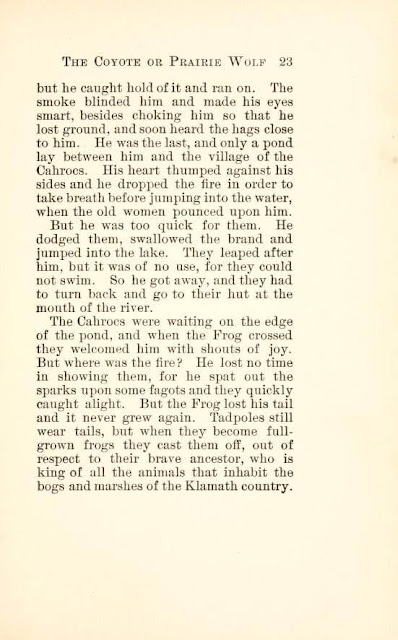 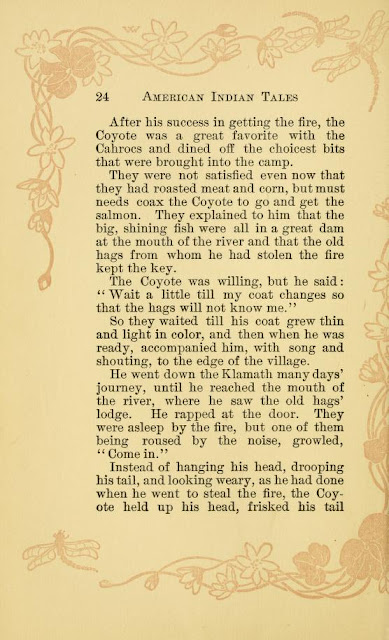 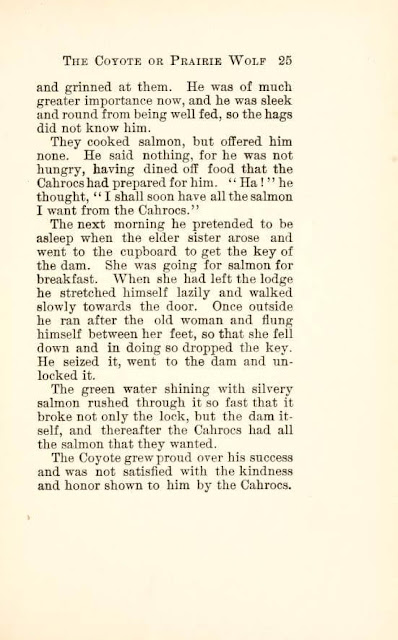 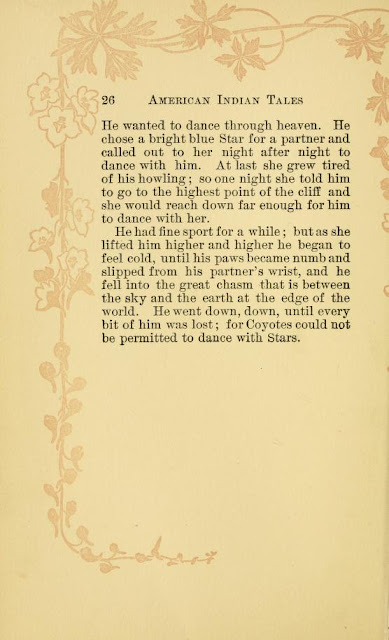 To save my own copy, I made use of Internet Archive, and needed to use two copies of the book.  The one with the anonymous botanical illustrations matches my own.  Internet Archive is currently offering a 2-to-1 Matching Gift Campaign, tripling the impact of every donation.  I am donating and hope you do, too. 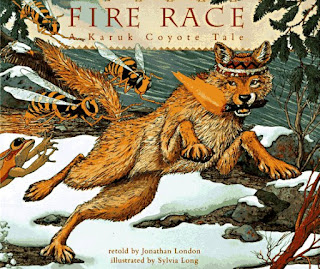 It reminded me of a 1997 picture book version called Fire Race.   Only when I looked further into the "reteller", Jonathan London, did I realize what a different work this was for him.  He is best known for the series of over 30 books about the best-selling Froggy, which started as a tale told to his young sons.  But a look at the over 120 books he has written shows, once he began writing, his love of nature has often taken him way beyond the lovable Froggy.  Fire Race is indeed his version, with action packed illustrations by Sylvia Long.  The book does a great job of showing how this effort to get fire would never have happened if dependent on only one thief.  (I also enjoy the Raven version where Raven does it alone, but the teamwork and action in this story make it a special version.)

At least London corrected the name to Karuk, but it certainly isn't the first time a name's spelling changes and becomes standardized over time.  That led me to look for further background information.

The Klamath River is discussed fully in Wikipedia including this discussion of the five main Klamath River Basin Tribes Today, especially the Karuk who are surely the Cahrocs of the story:

The Karuk tribe recognized self-governance in 1994 and gained federal recognition in 1979. As the California legislature rejected treaties to create federal designated land, the Karuk peoples do not have a reservation. The Klamath Forest Reserve was created by the U.S. government in 1905 and claimed Karuk land as public land. Members have been working to reclaim parcels of their original land and place them in trusts.

The concept of World Renewal plays heavily into both Karuk and Yurok culture. Although the term "world renewal" was coined by anthropologist Kroeber and Gifford, the Karuk tribe has adopted the phrase to refer to their annual ceremony that they view as essential to maintaining the reciprocal and stewarding relationship they have with the environment. The ceremony is meant to renew and sustain this relationship.[84] Many aspects of the larger ceremony involve being near or on the Klamath river, such as boat dances that take place in canoes and involve giving thanks and gratitude to the river.[85] Salmon are an integral aspect of Karuk identity, culture, and subsistence. Karuk fisherman continue to sustainably fish for Salmon despite their decreasing numbers, drought and myriad other ecological issues. Ishi Pishi falls, located near the town of Somes Bar, remains the traditional location for Karuk men to fish.[86] Karuk fishermen use a traditional dip-net fishing technique using long poles with nets on the end. This style of fishing works to naturally limit the amount of fish caught in a fishing session, thus ensuring that many salmon are able to spawn upstream and resupply the fishery.[87]

The Karuk language also revolves around the Klamath River, and the word "karuk" means "upriver". To indicate uphill, the word maruk is used, meaning away from the river. Conversely, the word saruk, meaning towards the river, is used to indicate downhill.[88]

The Wikipedia article specifically on the Karuk people has an interesting note about back in the mid-1870s there were two different types of shamans "There are two classes of shamans—the root doctors and the barking doctors ... It is the province of the barking-doctor to diagnose the case, which she (most doctors are women) does by squatting down ... before the patient, and barking at him ... for hours together. After her comes the root-doctor, and with numerous potions, poultices, etc., seeks to medicate the part where the other has discovered the ailment resides."

(Comment by LoiS) Coyote would surely have been pleased.

That description of the two types of shamans comes from the work of Stephen Powers, and much of the retelling of this story of Coyote comes from his third chapter, "Karok Fables" in 1877 Tribes of California.  His work was also in that Smithsonian Institute collection and surely was checked by Compton.  Powers, before entering the American Civil War as a newspaper correspondent in the Union Army, was a graduate of the University of Michigan.  U. of M. offers a free download of the book.  Powers wrote many articles and re-worked other notes to create his Tribes of California.  The book was the product of his walking and horseback riding thousands of miles studying the various tribes.  Fifty years later it was still considered "the best introduction to the subject" by Alfred Kroeber, then dean of Native California ethnologists.

How much of the Karuk tale is authentically retold by Compton, London or others?  I'm not an ethnologist.  I'm a storyteller who recognizes the value of this tale and believe in “Keeping the Public in the Public Domain."