Lakeview Cemetery Walk and the story of Elizabeth Vliet

I know many reading my articles can't make the Cemetery Walks I do in September and October.  For Oak Hill I've been a guide taking people around to hear the stories of the people buried there.  In Clarkston both last year at the first Cemetery Walk and again this year I have become one of the buried people.  I believe the story of Elizabeth Vliet has a lot worth hearing.  She was a "war widow" and some of my research for her includes information I already knew from my portraying Liberetta Lerich Green, whose two brothers were in the Civil War (I always say there was nothing Civil about that war!) and each lived after being "guests of the Confederacy" at Libby Prison.  (Their lifespan was reduced by what they endured.)

One of the things I love about storytelling is each time is tailored to its audience.  It's rather like a snowflake in that no telling is exactly alike.  It's also why I have chosen to have my stories told to an actual audience rather than just recorded and imagining audience reactions.  Additionally I include as much audience participation as I can.  In this case asking if anyone in the groups knows what being a "guest of the Confederacy" means.  (It gives me a hint of their possible Civil War knowledge.) Similarly I ask if people know what "Decoration Day" is now called.  In this story it's quickly obvious the audience members who know and can relate to what I'm saying about the Civil War.

Here is Elizabeth Vliet's story as I told it (with slight variations not affecting the facts).  You might also go to various genealogy sites, especially Find A Grave.

Welcome to my City of the Dead!

So many families came here from New York in the 1830s and 40s, around the time of Michigan becoming a state in 1837, that it's no wonder we all know each other. Here in Clarkston we all lived within three blocks of each other.  My big sister, Sarah, and I came across Lake Erie and landed in Detroit, then traveled north to come to Clarkston where we already knew some of the people. She married Jedediah Yager, the town blacksmith, while I earned my way as a dressmaker.  I stayed in touch with our sister, Maggie, back home in New York, especially when she became a war widow.

I, too, am one and don't know who had it worse -- me being left with three small children, Joshua, Helen, and baby Josephine or my sister, Maggie, who later lost her young son.  He was her only child, named after her soldier husband, Florian, who never had a chance to meet him. Yes, it was hard raising my children, but at least they helped me cope with the loss of my husband, Nelson Vliet, but Maggie soon lost everyone. Even in death my children and their families gather here. My youngest, Josephine, and my son, Joshua are right here. A bit further away is my daughter, Helen, who married into the Clark family.

Fortunately Clarkston families all knew and supported each other within our three blocks. I was so relieved that Jedediah came back to my sister, Sarah! There were five Vliet cousins serving along with Nelson. Many people lost family members in the War of Rebellion (there was nothing Civil about that war). Another of Nelson's cousins, Mary, and I both have husbands who are not here. Both were “Guests of the Confederacy” dying in their prisons. Her's was at Libby Prison and my Nelson is buried at Andersonville Prison. This stone with his name on it is called a cenotaph. A cenotaph memorializes someone buried elsewhere.

I don't like to talk about Andersonville, but maybe it's sufficient to say that after the war the camp commander was tried by a military tribunal for war crimes, found guilty, and hung. Even at that it was a quick death for him unlike the men he held prisoner. It's a miracle anyone lived to walk out of there. When they did, they looked like skeletons. Even then it shortened the lives of the survivors from dysentery. The water you see down there in Cemetery Lake is cleaner than what they had to drink at Andersonville.

But before all of that, and even before I married Nelson, he built our family house that stands near the intersection of Holcomb, just down the street at 11 South Holcomb. He did it with his father “Wiltsie” or Wilson Vliet. 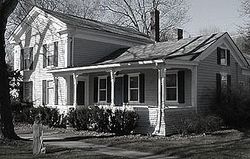 Nelson was the oldest of nine and the first generation after his parents came from Germany.  Wiltsie was the town cabinet maker and carpenter and would even make you a boat if you needed one! Nelson lived in that house with his first wife, Sarah, and their infant son, Alonzo. Sarah and their baby died in the same year. That happened a lot back then. Some of Clarkston's knowing and supporting each other came naturally since Nelson and I had both lived in the same New York town, Ludlowville. It was no surprise when Nelson and I went back there to get married in front of our relatives a year later.

It was a good start to our family, but too soon the war took him away with the 22d Michigan Volunteer Infantry. He mustered out in Pontiac under the command of former Governor Moses Wisner as their Colonel. Governor Wisner so wanted to take our Oakland County boys to defend the Union and end slavery. Wisner was a known abolitionist and even had his barn burned for championing that too often unpopular position. Wisner, too, didn't survive, but instead died of Typhoid Fever just a month later.

With their being the twenty-second infantry regiment you can see why Lincoln had been so happy with the many volunteer regiments from Michigan.  He was known for saying “Thank God for Michigan!” At first it looked like the 22d would be spared. They were in Kentucky until the spring of '63, then on to Nashville to guard the railroad which carried Union supplies through the summer. Unfortunately in September they were sent to Georgia for the Battle of Chickamauga. (My sister, Sarah's husband, Jedediah Yager, as a blacksmith was at Chickamauga with his Michigan cavalry regiment and will tell you more as you go further on your Cemetery Walk.) We all went down to the Clarkston rail depot to get the Detroit newspapers telling about how the war was going and learn of any casualties.  Chickamauga was the first major defeat for the Union. Only Gettysburg had higher casualties, but the main cause of Union deaths overall during the war was disease and that included my Nelson.

You may notice his grave also has the marker saying G.A.R. That stands for Grand Army of the Republic which after the war is the name for the Union Army veterans. Nelson was part of that army even though he didn't live to march in their reunions.

After the war I was one of many war widows. I supported our little family with my dressmaking. I also took solace in something called Decoration Day which eventually spread all over the country, even the south. We didn't have these paved roads, or even gravel roads from town to here at the time, but every year I gathered flowers and flags and walked down the hill from Clarkston, then up the hill to here, and decorated the ever increasing number of veterans from that war. Then it was down this hill and back up the hill to Clarkston again and home.

But children grow up and start their own lives. Here at the cemetery you passed the pink marble obelisk (they look like a finger pointing up to heaven) near your entrance. It was made for Charles Bower, who came from the same county in New York as I did. He, too, had lost a spouse, his wife. Their's had been a long marriage and we were both alone as our children were finally grown. After two years of talking and sharing our losses, we were ready to share our old age and my big empty home. He was 65 and I was 49. <sigh!> It was only for a year. At 50 I was twice a widow.

Over time my daughters, Helen a bit, but especially Josephine had also become involved in recognizing those who “gave their all.” Josephine even learned to become a dressmaker like me. When I died after still more years as a widow, she continued Decoration Day although it became Memorial Day and, shortly before she died, she passed the ceremony on to the American Legion. On what you call Memorial Day they remember all the veterans here complete with ladies in black dresses putting roses on the graves around the flag pole as part of the presentation.

This is a City of the Dead and here the people of Clarkston continue to know and support each other. I just wish my Nelson could be here instead of at Andersonville.

As you may have noticed last week from the bottom of the poster for the Cemetery Walk it was: Sponsored by the National Society Daughters of the American Revolution, Sashabaw Plains Chapter with funds going to the Restoration of Lakeview Cemetery historic gravestones.

Monthly during warm weather volunteer gravestone cleaning proceeds along with professional assistance from Carter Cemetery Restoration Company.  It was also in May the Eagle Scout project for James Lazur, a Clarkston High School senior. Dave Carter of Carter Cemetery Restoration Company  mentored James and his swim teammates as they learned to restore some of the historic headstones at the cemetery. James brought Scouts, family and friends to the cemetery to wash headstones. He planned, fundraised, and executed his project.

In addition to the professional and monthly volunteer cleaning, Clarkston involvement continues with Clarkston Junior High School students in Mr. Alexander Sennabaum's American History classes coming to Lakeview Cemetery on Tuesday, May 24. They washed headstones in the historic area just to the left of the entrance to the cemetery. As a class project and Service Learning project, the students had researched the early citizens of Clarkston, and especially the Civil War soldiers from Clarkston. They had created a three to five minute video about the life of the early settlers or soldiers. Working with their Technology teacher, Mr. Sennabaum, and Mrs. Rogers, the Academic Service Learning Coordinator, they created a QR code for their video and it is printed on a blue plastic stake that is placed right next to the gravestone. Community members that visit the cemetery can scan the QR code, listen to the students' presentations and learn about the early settlers who founded Clarkston.

This is what you find from the QR code at Nelson Vliet's cenotaph. 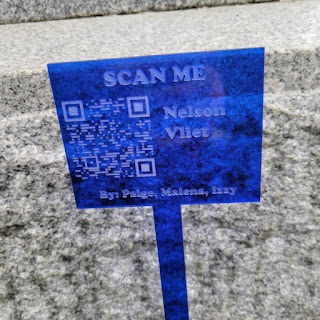 Clearly Clarkston continues to know and support each other.