Hope to see you at this Cemetery Walk and I have a bit of information on why cemeteries are important plus a very brief story.  If you know Clarkston, I will become the owner of the green house at the intersection of Holcomb and Washington.  Elizabeth Vliet's husband was a "Guest of the Confederacy" and died at Andersonville Prison. 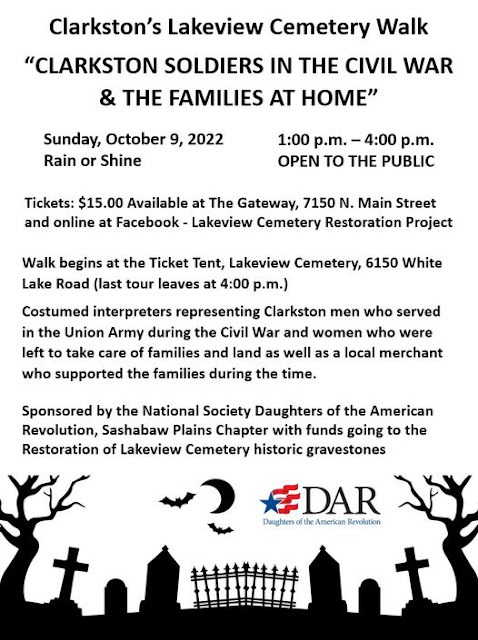 I went looking and found this explanation of why cemeteries are important.  It originated with the Texas Historical Commission and my only changes are changing the state to Michigan because it's certainly true here and wherever you may be.

Cemeteries are among the most valuable of historic resources. They are reminders of various settlement patterns, such as villages, rural communities, urban centers, and ghost towns. Cemeteries can reveal information about historic events, religions, lifestyles, and genealogy.

Names on gravemarkers serve as a directory of early residents and reflect the ethnic diversity and unique population of an area. Cultural influence in gravemarker design, cemetery decoration, and landscaping contribute to the complete narrative of Michigan history. Established in large part for the benefit of the living, cemeteries perpetuate the memories of the deceased, giving a place character and definition.

Unfortunately, historic cemeteries do not necessarily remain permanent reminders of our heritage. Across Michigan, they are threatened by development and expanding urban areas, natural forces such as weathering and uncontrolled vegetation, lack of fences to keep cattle from toppling headstones, and vandalism and theft, including removal of headstones and objects. Neglect accelerates and compounds the process.

If not recorded and cared for, these reminders of early settlements could be lost forever.

I tend to think of cemeteries as being Cities of the Dead -- rather like Spoon River Anthology, by Edgar Lee Masters and also adapted into a play and similarly the play, Our Town, by Thornton Wilder.  Just think of all the stories in any cemetery!

That started me looking for a story about cemeteries.  I found the title story in The Silver Crown; Another Book of Fables, but was surprised to discover a different Laura E. Richards story about The  Grave Diggers was here back in September 23, 2020 before other cemetery walks.  Richards has the skill to write something just big enough to cover the subject and keep it interesting.

"You shall surely wear a crown," said the Angel, "and a kingdom is waiting for you."

"Oh, joy!" said the child. "But tell me, how will it come about? for now I am only a little child, and the crown would hardly stay on my curls."

"Nay! that I may not tell," said the Angel. "Only ride and run your best, for the way is long to your kingdom, and the time short."

So the child rode and ran his best, crossing hills and valleys, broad streams and foaming torrents. Here and there he saw people at work or at play, and on these he looked eagerly.

"Perhaps, when they see me," he said, "they will run to meet me, and will crown me with a golden crown, and lead me to their palace and throne me there as king!"

But the folk were all busy with their tasks or their sport, and none heeded him, or left their business for him; and still he must fare forward alone, for the Way called him.

Also, he came upon many travellers like himself, some coming toward him, others passing him by. On these, too, he looked earnestly, and would stop now one, now another, and question him.

"Do you know," he asked, "of any kingdom in these parts where the crown is ready and the folk wait for a king?"

"I am seeking crown and kingdom for myself," cried one; "is it likely that I can be finding one for you, too? Each one for himself, and the Way for all!"

Another said: "You seek in vain. There are no crowns, only fools' caps with asses' ears and bells that jingle in them."

But others, and these they who had been longest on the way, only looked on him, some sadly, some kindly, and made no answer; and still he fared onward, for the Way called him.

Now and then he stopped to help some poor soul who had fallen into trouble, and when he did that the way lightened before him, and he felt the heart light within him; but at other times the hurry was strong on him, so that he would turn away his face, and shut his ears to the cries that rang in them; and when he did that, the way darkened, and oftentimes he stumbled himself, and fell into pits and quagmires, and must cry for help, sometimes on those to whom he had refused it.

By and by he forgot about the crown and the kingdom; or if he thought of them, it was but as a far-off dream of dim gold, such as one sees at morning when the sun breaks through the mist. But still he knew that the way was long and the time short, and still he rode and ran his best.

At the last he was very weary, and his feet could carry him no further, when, looking up, he saw that the way came to an end before him, and there was a gate, and one in white sitting by it, who beckoned to him. Trembling, yet glad, the child drew near, and knew the Angel who had spoken to him at the beginning.

"Welcome!" said the Angel, "you come in good time. And what of the Way?"

"I came as fast as I could," said the child, "but many things hindered me, and now I am weary, and can go no further."

"But what did you find on the way?" asked the Angel.

"Oh! I found joy and sorrow," said the child, "good measure of both; but never a crown, such as you promised me, and never a kingdom."

"Oh, dear, foolish child," said the Angel. "You are wearing your crown. It is of purest silver, and shines like white frost; and as for your kingdom, the name of it is Rest, and here the entrance to it."

Cemeteries should make us think and want to know the stories there.  May you, too, earn a crown.