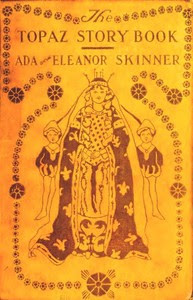 The work of Ada and Eleanor Skinner have been represented here before.  Sometimes it has been their original work or stories they adapted.  This is especially true because of their anthologies for each of the seasons.  Autumn stories and poems are gathered in The Topaz Story Book.  The subtitle says why now it is worth returning to and prowling for "Stories and Legends of Autumn, Halloween, and Thanksgiving."  I'm not always certain how authentic the "legends" may be, but they do give us a chance to think about how something came to be.  Such stories are called "Pourquis" tales, from the French word for "Why."  As frost starts to kill off flowers it's no wonder the few remaining catch our attention.  So it is with the Goldenrod.  Fields with asters and goldenrod take our eyes off the changing leaves both in the trees and on the ground.  Topaz has two short poems and two stories about this plant.  Like the plants, let us enjoy it while it lasts.

On the hill the golden-rod,

And the aster in the wood,

And the yellow sunflower by the brook,

Just as that poem mentions both goldenrod and aster, one of the two stories is about both.  This story is about the goldenrod alone.

A LEGEND OF THE GOLDEN-ROD

(From “Story-Telling Time.” Used by permission of Pilgrims Press.)

Once there were a great many weeds in a field. They were very ugly-looking weeds, and they didn’t seem to be the least bit of use in the world. The cows would not eat them, the children would not pick them, and even the bugs did not seem to like them very well.

“No good at all,” growled a dozen little weeds, “only to catch dust.”

“Well, if that’s what we’re here for,” cried a very tall weed, “then I say let’s catch dust! I suppose somebody’s got to do it. We can’t all bear blueberries or blossom into hollyhocks.”

“But it isn’t pleasant work at all,” whined a tiny bit of a weed.

“No whining allowed in this field,” laughed a funny little fat weed, with a hump in his stalk. “We’re all going to catch dust, so let’s see which one can catch the most. What do you say to a race?”

The little fat weed spoke in such a jolly voice that the weeds all cheered up at once, and before long they were as busy as bees, and as happy as Johnnie-jump-ups. They worked so well stretching their stalks and spreading out their fingers that before the summer was half over they were able to take every bit of dust that flew up from the road. In the field beyond, where the clover grew and the cows fed, there was not any to be seen.

One morning, toward the end of summer, the weeds were surprised to see a number of people standing by the fence looking at them. Pretty soon some children came and gazed at them. Then the weeds noticed that people driving by called each other’s attention to them. They were much surprised at this, but they were still more surprised when one day some children climbed the fence and commenced to pick them.

“See,” cried a little girl, “how all the dust has been changed to gold!”

The weeds looked at each other, and, sure enough, they were all covered with gold-dust.

“A fairy has done it,” they whispered one to the other.

But the fairies were there on the spot, and declared they had had nothing to do with it.

“You did it yourselves,” cried the queen of the fairies. “You were happy in your work, and a cheerful spirit always changes dust into gold. Didn’t you know it?”

“You’re not weeds any more, you’re flowers,” sang the fairies.

According to Find-A-Grave.com Frances Weld Danielson was "an acclaimed writer of children's books" and it lists some of her early 20th century work.  Her publisher, The Pilgrim Press, is "North America's oldest English language publishing tradition" going back to "the Bay Psalm Book produced in 1640 by the Puritans of Massachusetts Bay Colony."  Certainly Danielson's story and its publisher deserve their place in the Public Domain.

The following Goldenrod poem is attributed to Anna E. Skinner.  At first I thought it might be a typo, but the name looks like it might honor Eleanor in its middle initial.  <SIGH!>  The work of the authors in Public Domain don't always tell us much about them.  Their work must speak for them.

GOLDEN-ROD
Pretty, slender golden-rod,
Like a flame of light,
On the quiet, lonely way,
Glows your torch so bright.
With your glorious golden staff,
Gay in autumn hours,
Now you lead to wintry rest,
All the lovely flowers.
Cheering with a joyous face,
All that pass you by,
How you light the meadows round,
With your head so high.
Anna E. Skinner.
As I write this, the ground is starting to be coated by wet snow that the weather report says, as of this weekend, will be replaced by temperatures in the 60s and 70s.  Fortunately Goldenrod will still survive a while longer to brighten our fields!
Similarly the stories, poetry, illustrations, and music will survive in Public Domain as long as we continue to pay attention to them.
*****************