Oleda and the Michigan Military & Veterans Hall of Honor

This past Friday was Veterans Day, a day to honor the bravest of our citizens: the many people who have served in the military to defend our freedom. Veterans Day honors all military members, regardless of the war or conflict, or if they survived or perished.  The coming Friday a special Michigan event will occur.

The Michigan Military and Veterans Hall of Honor creates a Hall of Honor for Michigan citizens who have distinguished themselves through military service and/or public service as a veteran of the Armed Forces of the United States. 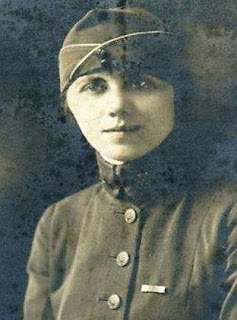 The "Hall of Honor" is currently only online, with an annual Hall of Honor Day celebrating the newest additions and learning more about why they were chosen.  This year Oleda Joure Christides, a World War I "Hello Girl" from Marine City, will be honored.

Online, beyond their website, the Hall of Honor also has a Facebook page, where they have been posting about this year's ten inductees.  This is what they posted about Oleda:

Oleda was born in 1897, in Marine City, and served as a telephone operator in the U.S. Signal Corps' famed "Telephone Girls" Brigade in World War I.
When the U.S. entered the war in 1917, American Expeditionary Forces (AEF) Commander General John Pershing recognized that expert telephone communications and technology support between command units and the front lines would be crucial to victory.
Upon demobilization in 1919, Joure-Christides returned to Marine City and resumed her civilian career as a telephone operator, married, and raised a family. Despite assurances to the contrary, the Army issued Telephone Girls Brigade "Service Termination Letters" instead of a military discharge, denying them veteran status and any benefits. After decades of fighting; in 1978, Joure-Christides was awarded her full official discharge at home with her husband, Chris, by her side.
Oleda passed away in Marine City in 1984.
Hear her incredible story and many others at the #MMVHOH Military & Veterans 2022 Hall of Honor Inductee Ceremony on Friday, Nov. 18th at 12:30 PM!
Event information: https://bit.ly/3sQZ9pj

This will be another opportunity for me to meet with many of Oleda's family.  Whenever my historical programs are about a real individual, I try to work with their family.  Sadly Oleda's daughter, Helen, who was a great help, has passed away, but I hear her son will be there.  I also worked a bit with Oleda's other daughter, Michelle, who has done a great deal to spread the word about these Signal Corps Operators, both their work in World War I as the first female combatants and their 60 year battle that finally succeeded in recognition by the army.  Oleda was fortunate enough to be among the 50 operators still living who finally received their veterans status and honorable discharge in 1978.

Oleda died in 1984.  The brief summary of their work and eventual recognition is at Wikipedia.

As I understand it, Michelle will be unable to attend the Hall of Honor ceremony, but has prepared a brief video for the occasion.

The Hall of Honor's purpose is twofold, both to honor and to educate.  Those education goals are:

To educate Michigan citizens, and particularly young people, about the military and civic service of state veterans in order to inspire a sense of pride, patriotism, and civic virtue.

To promote through scholarships, grants, and other means, the research and teaching of Michigan’s military heritage and the importance of military service to citizenship throughout the state.

Sometimes storytelling offers an opportunity to touch history and the people who lived it.