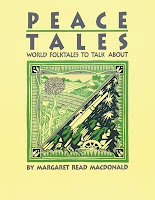 While this is almost the end of this year's Native American Heritage Month, it certainly should never be the end of some of the wisdom told in the stories of this continent's First Nations both in the U.S. and Canada.  Our country seems particularly in the grip of mass murders and hate.  This week has been our Thanksgiving, but it has too often felt like we are doing everything possible to hurt each other.  That sent me hunting for stories with a possibility of helping.  Margaret Read MacDonald's book, Peace Tales; World Folktales to Talk About is an excellent modern book with the added benefit generally found in folklore books nowadays of including a bibliography of the sources for its stories.  MacDonald has her doctorate in folklore and is particularly thorough in not only giving her sources and other books on her topic, but much more including ways to tell the stories. 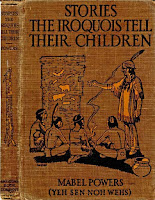 MacDonald gave a version of an Iroquois peacemaking technique that she found as a story in a book by Mabel Powers (or Yeh Sen Noh Wehs, which means "The One Who Carries and Tells the Stories").  Back on November 13, 2020 I have included another story, "How Giving Evil for Evil Ends" from Powers' book, Around an Iroquois Story Fire.  It is definitely appropriate for a desire to find a conflict resolution or Peace tale to talk about.  Peace Tales, however, uses a story Powers tells in Stories the Iroquois Tell Their Children.  MacDonald re-tells "How Two Indian Boys Settled a Quarrel" calling her version, "The Argument Sticks."  It is so condensed it looks more like poetry.  I will include the original story, but only after the story named in today's blog title.  At first the title story seems more like an explanation of Iroquois customs including the role of women as Peacemakers, but the story part really begins when telling of "a Peacewoman" who "proved untrue to her trust."  Because the story of the boys is both short and another method of peacekeeping, it will follow today's title story.

A FIREMAKER AND A PEACEMAKER

In the olden times, tribes of Indians did not always live in one place as they do now. They sometimes wandered from one valley or woodland to another. When they came to a sheltered place, where there was pure running water, and where plenty of game and wood were to be found, they would build their lodges and light their council fires.

There they might camp for one moon, or for many moons. As long as their arrows brought game on the hunting trails near, they would not break camp. But if game grew scarce, or if for any reason they did not like the camp ground, they would move farther on.

Sometimes they would go several days' journey, before they found a camping place such as they liked.

The first thing that was done in making a camp was to secure fire and light the council fire. This fire was always kept burning. It never went out while they remained.

The Indians loved the fire. It was the gift of the Great Spirit to the Red Children. It kept them warm and cooked their food by day, and protected them by night.

A line of fires was kept burning around the camp. This protected the Red Children from the wild animals, for all animals fear fire, and are charmed by it. They might prowl and howl all night long outside the fire ring, but never would they attempt to come within that ring. There the Indians could sleep in peace, guarded by the spirits of the fire.

The Indian that could make fire first became a chief and leader. When it was decided to camp at a certain place, a signal would be given. At this the young braves would leap into the woods, to see which one first could bring back fire. Each had his own secret way of making it. Usually a bowstring was twisted about a fire stick, and the stick was turned rapidly in a groove. In a few seconds, smoke would rise from the sawdust that formed. After a little fanning a flame would leap forth.

The Indian whose brain and hand worked swiftest and surest was the smartest and best man. He became a Firemaker, and was made a chief of the tribe. He could do something that the rest could not,—at least he had proved himself to be more skillful. Such a man, it was thought, had a better understanding of all things, and therefore could tell the rest of the tribe what ought to be done.

He no longer was just a man who ate and slept, walked and ran. He was a man with a mind. He could think and could do things. So he became a Firemaker chief, and he helped the tribe to think and do.

Now it happened that sometimes an Indian grew to be so kind and so great, that he could not only strike the fire we see, but the fire we do not see,—the fire of love that burns in the hearts of people.

When an Indian could strike this kind of fire, and warm the hearts not only of his own tribe but of all tribes, so that they came to love one another, he was a great chief, a Peacemaker chief. Such a man would go from tribe to tribe, teaching the people how they should do, so that all might live in peace and plenty, like brothers.

To be a Peacemaker was the highest seat an Indian could take. Few Indians became Peacemaker chiefs, and they were the great men of the tribe.

Indian women also might become Peacemakers. At one time the Iroquois had a Peace Wigwam, where all disputes and quarrels were settled.

The most beautiful, just, and fair-minded woman of all the tribes was chosen to sit in this wigwam. It was her duty to tend the Peace fire, and to see that it never went out. She also kept a pot of hominy always steaming over the fire.

If two Indians had a dispute, it was the custom for them to run to the Peacemaker's wigwam. They entered from opposite sides. Inside the wigwam, a deerskin curtain separated them from each other.

The Peacemaker would listen to the grievance of the one and then to that of the other. Then she would draw aside the curtain, get the enemies together, and settle the dispute with justice.

The two would then eat of the hominy, and depart in peace,—no longer enemies, but friends.

No nation could fight another nation without the consent of the Peacemaker. Because the peacewomen were wise, and just, and kind, and taught men to love, not fight each other, the Iroquois were for many years at peace.

But one day, it is said, a Peacewoman proved untrue to her trust. She thought more of her own happiness than that of the nation.

This woman was very beautiful, and the people loved her. For some time she sat in the Peace Wigwam, and tended faithfully the Peace fire.

One day an Oneida and a Cayuga chief fell to quarreling. They sought the Peace Wigwam. As they entered and saw the young Peacewoman tending the fire, each thought he had never seen a woman so beautiful.

Into the heart of each there leaped the desire that she might tend his wigwam fire.

The Peacemaker listened to the quarrel of the young chiefs and settled it justly. Then each tried to persuade her to leave the Peace fire and return with him to his lodge. But the Peacemaker said, "No, I must tend the fire, it must be kept burning." The chiefs departed with heavy hearts.

But the Oneida chief could not forget the beautiful woman. When a moon had passed, he returned to the Peace Wigwam. This time he persuaded the Peacemaker to leave her fire and return with him to sit at his wigwam door.

The Peace fire flickered and went out. The Iroquois again went on the warpath, and for many, many moons, they fought and suffered and died.

Flying Squirrel and Lightning Bow were two little Indian boys. They lived by Singing River, and they played from sunrise to sunset. They were as happy as the day was long.

In the summer, they fished and swam in Singing River, and they shot their arrows into chipmunk and woodpecker holes. Sometimes they played "Dodging Arrows," a game their mother had taught them when they were very young.

In the winter, they jumped into fleecy snowdrifts and rolled until their little bronze bodies took on a red-raspberry tint. Then they would send their snow-snakes skimming over the hard crust of snow.

Snow-snakes were small rods of wood, polished smooth with resin, oil, or wax. They could be thrown long distances. Long Moose—Lightning Bow and Flying Squirrel's father—could throw a snow-snake a mile and a half, over the crust of the snow. But the snow-snakes he used were eight feet long and tipped with lead.

It was the Moon of Berries. Six times had Flying Squirrel and Lightning Bow seen the Berry Moon hang her horn in the night sky. And not once in all their lives had they quarreled.