Lane - An Illiterate Schoolmaster - Keeping the Public in Public Domain

I couldn't resist this story of "An Illiterate Schoolmaster" from the many tales commonly called The Arabian Nights.  It stands on its own, but I always would encourage finding as many translations as possible before re-telling.

Edward William Lane did this version and the Wikipedia article gives an interesting insight into how this 19th century British son of a minister and grandnephew of the artist, Gainsborough, came to fall in love with Egypt and move there.

As the article mentions, there are varying opinions on his translations.  Such opinions seem to follow the many interpretations of these stories, but it's also interesting to compare the way a translator working in the 19th century differs from contemporary versions by Husain Haddawy and still more from re-tellings for children or oral storytelling.

Lane calls it an anecdote and he includes annotations in this story of a slippery trickster.  The annotations, unfortunately, are in a smaller font 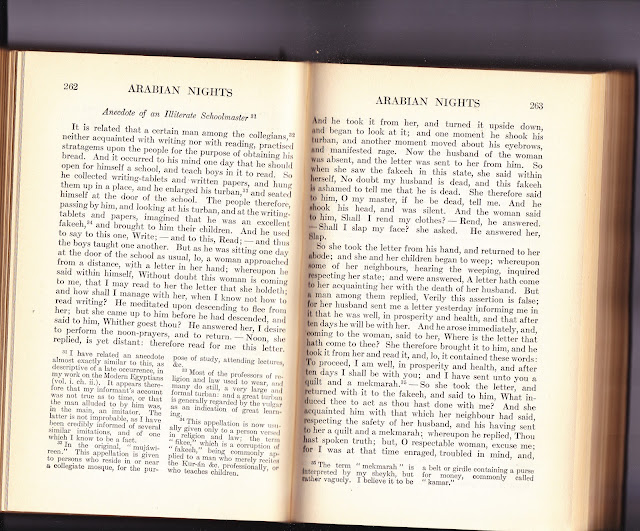 Gifted author and anthologist  Carolyn Sherwin Bailey has so many books in Public Domain, the trick is selecting just one of her many offerings.  That will be a tough choice, so check back to see what appears.
****
This is part of a series of bi-weekly posting of stories under the category, "Keeping the Public in Public Domain."  The idea behind Public Domain was to preserve our cultural heritage after the authors and their immediate heirs were compensated.  I feel strongly current copyright law delays this intent on works of the 20th century.  I hope you enjoy discovering new stories.