"And now for something different..." - Keeping the Public in Public Domain

When I discovered more about the next story, I was forced to choose between including it with the posting of the story or making a separate post.  Because Public Domain is so important, I decided the issues deserve a separate article.  The story will follow tomorrow instead of its usual Wednesday and Saturday schedule.  Tomorrow's story is a longer tale, so that added to my decision.

Today I want to touch on the issue of public domain and how it is sometimes subverted; the author of tomorrow's story; and a guest comment from no less than Theodore Roosevelt.

It's dangerous to let me start commenting on public domain for I tend to get on my soapbox and begin to rant. As stated after the public domain stories posted here, "The idea behind Public Domain was to preserve our cultural heritage after the authors and their immediate heirs were compensated.  I feel strongly current copyright law delays this intent on works of the 20th century."  But there's more going on to hinder this cultural preservation.  Re-publishers of such works should be required to bring something to their copyrighting their own efforts.  Tomorrow's story comes from a book available as a Kindle e-book which claims copyright.  Another blog I do, Michigan's "Fighting Fifth" Civil War Infantry posts the Detroit newspaper articles at the pace they appeared 150 years ago.  I use the microfilmed articles at the Library of Michigan, but the index to Michigan in the Civil War, an index by Helen Ellis, of Detroit Public Library's   Burton Historical Collection used a different edition for the Detroit Free Press from the one on microfilm.  A database today exists of those articles, but using them is subject to the "copyright" of the creator of that database.  How does that or the republishing of items long out of copyright match the stated intent of public domain?  Yes, these new publishers are using technology to keep the works available, but I prefer to support the work of Project Gutenberg and others freely offering the cultural preservation implicit in public domain.  (That Project Gutenberg link takes you to the entire book containing tomorrow's story, if you want more.)  I'll cut off my rant here so we can get to the other two points mentioned.

The authors of these past folklore anthologies are too often just names.  It's been fascinating to me to discover more about them.  Wikipedia has often been the source of such information.  Henry Beston certainly is way more than might be apparent from tomorrow's tale from The Firelight Fairy Book.  He wrote a great deal beyond fairy tales and is best known as a naturalist and author of the 1928 (not yet in public domain) book, The Outermost House.  It is so influential that it's called a "nature classic",  he's considered one of the fathers of the modern environmental movement, and Rachel Carson said he was the only author who ever influenced her writing.  For a more personal sidelight, this lover of children's literature was delighted to learn he married children's author, Elizabeth Coatsworth.

But we mustn't keep the comments of Ted Roosevelt waiting.  Before you think that's too informal, you should know this is the nature-loving son of the president.  Theodore "Ted" Roosevelt III is generally known as Theodore, Jr. and he had an active and distinguished political and business career of his own in addition to winning the Congressional Medal of Honor.  That last is also true for his father.  The two T.R.s share this a father/son honor only with Arthur and Douglas MacArthur.  You can certainly hear Ted's father's influence in his comments here in the Foreword to The Firelight Fairy Book. 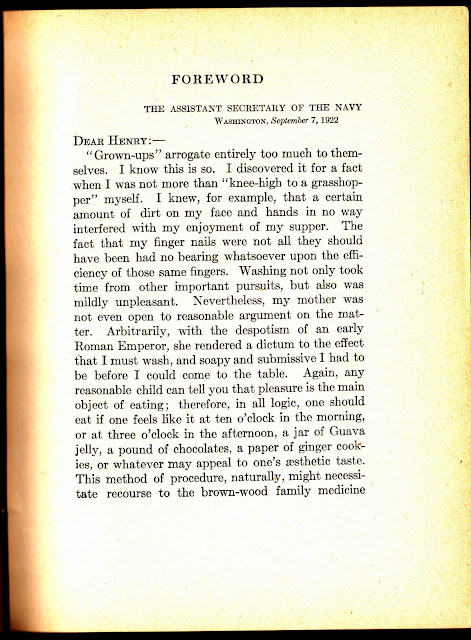 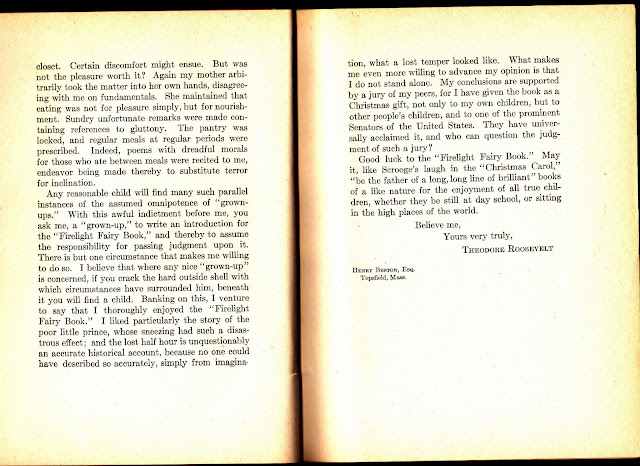 Well that's today's "And now for something different..." Be sure to catch tomorrow's story of "The Bird-Boy."
**************
Once again I state:
This is part of a series of bi-weekly posting of stories under the category, "Keeping the Public in Public Domain."  The idea behind Public Domain was to preserve our cultural heritage after the authors and their immediate heirs were compensated.  I feel strongly current copyright law delays this intent on works of the 20th century.  I hope you enjoy discovering new stories.