Baldwin - The Wonderful Weaver - Keeping the Public in Public Domain

I was disappointed when I did a search for today's author.  Only the civil rights activist and writer of the novel, Go Tell It on the Mountain, by that name appears.  There are actually two important authors named James Baldwin deserving attention.  The very intent of Public Domain occurs with the James Baldwin who lived from 1841 to 1925.  He was a leader in 19th century education and an author and editor in the late 19th and first quarter of the 20th century, whose works were said to be half the textbooks in U.S. schools during his lifetime.  Fortunately the Baldwin Project is named for him and has similar goals for Public Domain works.  On the page stating their mission to bring "yesterday's classics to today's children", they quote William Bennett in The Book of Virtues as saying Baldwin and other authors of his time "devoted their energies to preserving some of the best of our heritage, and whose works have supplied this volume with many truly great stories."

All this sounds dreadfully serious, but I applaud this Mr. Baldwin for taking something like the Greek myths and telling them "simply as stories, nothing more."  The italics are his own emphasis and I also appreciate his going on to say "I have carefully avoided every suggestion of interpretation.  Attempts at analysis and explanation will always prove fatal to a child's appreciation and enjoyment of such stories."  The same could be said for a storytelling audience.

Here is proof that he succeeded in those efforts. 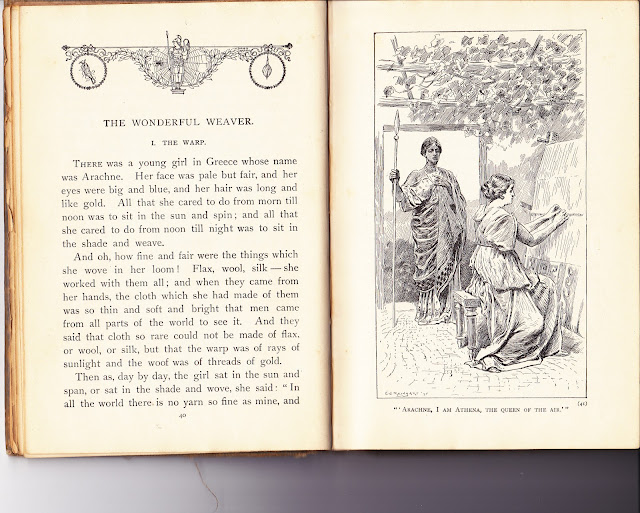 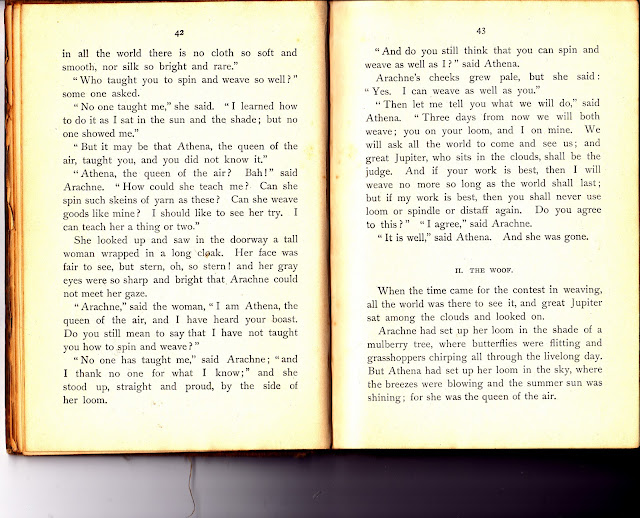 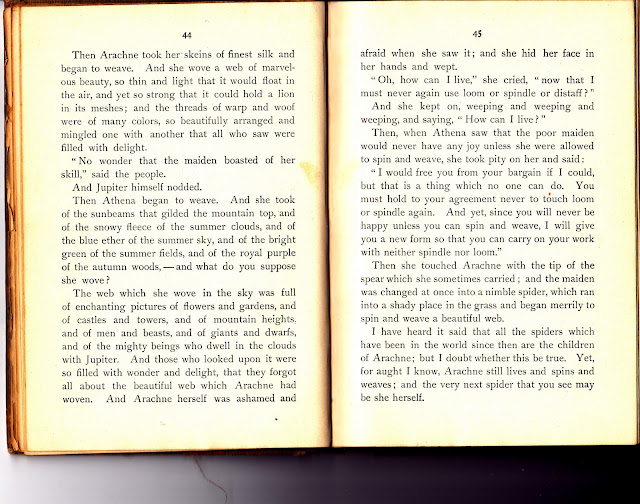 All you naturalists, of course, will point out that spiders are call arachnids and this story gives the root of the name.  At most you might want to explain the weaving terms of warp and woof, loom, spindle, and distaff.

This came from Old Greek Stories.  That book and many others by Baldwin can be found on his page.  Looking at his deceptively simple style, I am grateful for their project so that we can continue Keeping the Public in Public Domain.
****
This is part of a series of bi-weekly posting of stories under the category, "Keeping the Public in Public Domain."  The idea behind Public Domain was to preserve our cultural heritage after the authors and their immediate heirs were compensated.  I feel strongly current copyright law delays this intent on works of the 20th century.  I hope you enjoy discovering new stories.