Bees and the Anishinaabe

For those beyond the Great Lakes, today's article may be more than you care to know about the Native culture of my area here in Michigan and surrounding areas.  For those seeking books of folklore for our area, somehow it never gets indexed!  Hollywood also ignores Native Americans here.  November is Native American Heritage Month and also the time when insects make their last stand for the year. 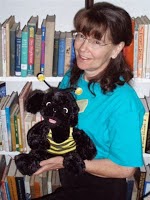 At the risk of the familiar "shameless self-promotion", go to my website and currently in two places you'll see me with my puppy puppet, Buzz.  On the Nature Programs page he's all dressed up as a bee because we do an insect program called "Going Buggy in the Garden" and its focus especially points out the difference between bees and yellow jackets, a.k.a. hornets.  For some insect resources, many on bees and that all important difference, go to the Nature section of Specialized Resources.  (Buzz also appears twice on the not yet revised Summer Reading page -- he's been a regular assistant, but 2015 will bring a new cheerleading girl gorilla to "Give a Cheer for Reading and Heroes in the 398s!")

Here in the Great Lakes and among Canada's First Nations for this area, the Anishinaabeg tell of the poor bee going to Nanabazhoo (spelled many ways, but that's a phonetic version of one pronunciation) requesting a defense for themselves and their honey.  He values their industriousness and lets them return a few days later to get what he can create for them.  Unfortunately bees are generous and bring their cousins, the hornets and wasps, with them.  Nanabazhoo regrets his promise, but agrees since the bees vouch for them, and from then on all those insects have stingers.

A medicine woman, now on The Long Walk, who passed along many traditional stories to me must have been my source as I checked Simon Otto's books, Henry Rowe Schoolcraft, and another very slender volume from Wah-be-gwo-nese (Little Flower) and none tell it.  I know it didn't come from friends in my area.  Simon is an Odawa (Ottawa) elder who at first was criticized for sharing the traditional stories, but now is recognized as preserving tradition.  In our state he and another friend are the only professional Anishinaabe tellers, and neither live close by, so I do what I can to share the stories and culture with respect.

A few years ago on the international email list, Storytell, we compared 4 levels of cultural knowledge:
Over the years I've come close to level 2.

Our oldest written source of Anishinaabe folklore is Henry Rowe Schoolcraft, who became an emigre back in the early 19th century, marrying into it and preserving many stories as best he understood them.  His own history and additionally that of his wife, Bamewawagezhikaquay ("Woman of the Sound [that the stars make] Rushing Through the Sky") or the other version of her name, Jane Johnston, is plenty interesting.  Their literary work led to Longfellow's "Hiawatha."  Longfellow started with the idea of Nanabazhoo, but then definitely went beyond those sources, even though he insisted it was based on the legends.  Henry Rowe Schoolcraft and his wife have two articles/stories here as part of the Keeping the Public in Public Domain series.

Besides Schoolcraft and Simon Otto -- whose many books and work I recommend highly -- you might be able to find books by Louise Jean Walker who wrote Legends of Green Sky Hill and Woodland Wigwams. The first book contains her version of the bones of the story I just gave.  My problem with it, like some of her work, is that it shows her own sources, native women elders of the Charlevoix area, had influences beyond the Anishinaabe.  Her version of the story is a perfect example as it uses Wakonda as the manitou giving the stingers.  That name comes from the Omaha people.  They were of the Siouan language group, while our people are of the Algonquian language group -- and a complex language it is!  (You may notice my own use of Anishinaabe at times becomes Anishinaabeg as that is the plural, and some write that plural as Anishinaabek.  As someone barely able to use the language, I apologize for any mistakes.)  In the past those two cultures warred against each other, but today the spirit of the Pow-wow and the many other reasons for Native American unity have changed that.  Still I have noticed various things in Walker that lead me to approach her work with caution.

Michigan's Native people are also among the First Nations in Canada and are called, among other names, the People of the Three Fires, as they are made up of the Ojibwe (also called Chippewa), Odawa (or Ottawa), and the Pottawatomi.  Wikipedia's Anishinaabe overview gives some good historical, cultural, and other resources.  There's a good site directly from the Anishinaabe-Ojibwe.  Here are some resources about Nanabazhoo, including the various ways his name is handled.  Medicine woman Keewaydinoquay Peschel's pronunciation is the one I use as she was my first introduction to the Anishinaabeg.  She said it was closer to Odawa than her Ojibwe roots. Here's an article on Kee and her work.  She's controversial for a variety of reasons, more than the article lists, but was a true member of the Crane clan, whose work is to preserve cultural heritage.  I do my outside best to fairly represent that culture.

The Petoskey Schools have been blessed by having Odawa elder, Simon Otto, as a resource.  They have posted this lesson plan template for Third Grade.  I mentioned Simon has done of the service of preserving much of Anishinaabe folklore in his books and my own strong recommendation of them.  To make it easier to locate them, here is a list of his work:
Here are five enjoyable ways to Celebrate Native American Heritage Month suggested by the American Indian College Fund.
LoiS(ince the Storytell discussion on screen width, long links are arranged to not span 2 lines -- I prefer showing the source rather than converting to something else)
Posted by Lois Sprengnether Keel at 1:00 AM