I've a great story today and I'd like to tie it in to something happening right now, but don't want to get sued!

This is the weekend for one of the oldest U.S. Highland Games in Livonia and I'll be storytelling there BUT this is from the International Trademark Association about not mentioning some other games.

2. Which Olympic trademarks are protected in the United States?

The Olympic trademarks protected by U.S. statute (36 U.S.C. § 220506(c)) include the name “UNITED STATES OLYMPIC COMMITTEE”; the symbol of the IOC, consisting of five interlocking rings; the words “Olympic,” “Olympiad” and “Citius Altius Fortius,” and also the words “Paralympic,” “Paralympiad,” “Pan-American” and “America Espirito Sport Fraternite,” or any combination of these words; the emblem of the United States Olympic Committee, consisting of an escutcheon having a blue chief and vertically extending red and white bars on the base with five interlocking rings displayed on the chief; and the symbols of the International Paralympic Committee and the Pan-American Sports Organization, consisting of a torch surrounded by concentric rings.

WOOPS!  That was just a quote from your own website, I.T.A., don't sue me!

This week I heard businesses are being sued or threatened with lawsuit if they use certain phrases and that's even beyond the logo and some words not listed in that bit of legalese.  ou may have guessed I chose this story because of a two weeks-long group of athletic contests.  Yes, my tongue is firmly in my cheek since my blog is in print, but am willing to be cautious in naming it or using various words or phrases, including the name of the city where it's happening.  The International Olympics Committee is especially looking at corporate Tweets, but I remember libraries learning that even the phrase "Go for the ___" and naming a chemical element with the symbol Au and the atomic number 79 is apt to get them sued or at least a "Cease and Desist" order.

Now for the story from Brazil. 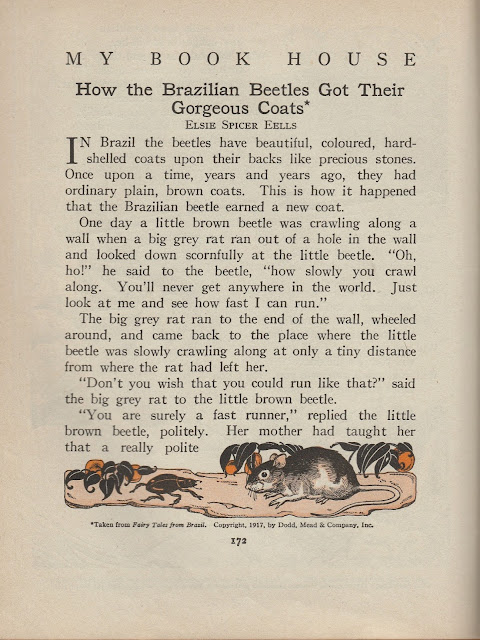 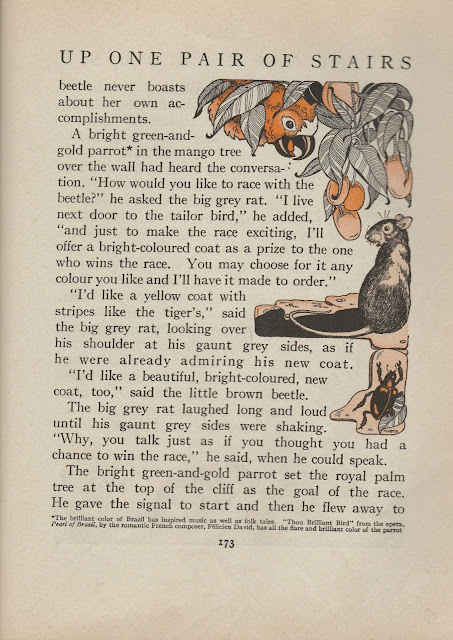 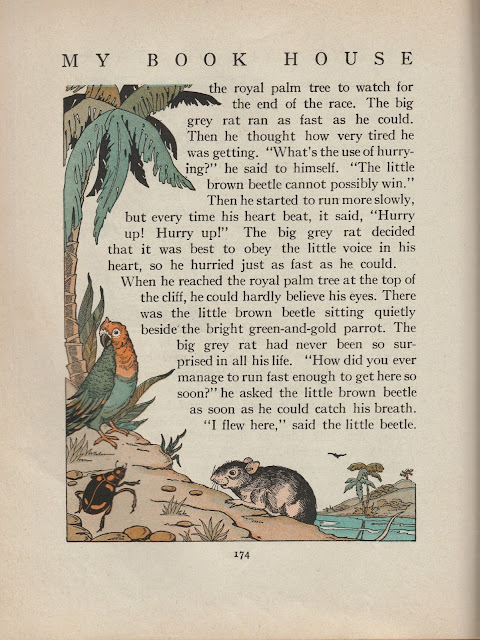 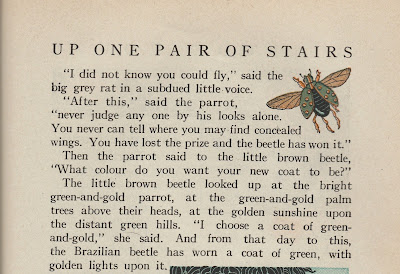 I like this much more than other stories in the motif K 10 - Athletic contest won by deception -- which includes the well-known "Tortoise and the Hare."  The conclusion on this story is really great and certainly goes beyond the usual trickster's methods with a message that doesn't get preachy.

I'm not alone in this, fellow storyteller, Fran Stallings, told me, it "was a childhood favorite and one of the first stories I ever told outside the family. My version of it has become almost a 'signature' story, and is included on my CD of Stories & Songs for a Green Earth."   I prefer print, but while mentioning audio, LibriVox has a recording of Fairy tales from Brazil, too.

You may have noticed my copy comes from the wonderful old multi-volume set, My Book House, edited by yet another fine producer of 20th century anthologies, Olive Beaupré Miller.  I was delighted last week to learn from an antiquarian bookseller that My Book House, which went unappreciated for a long time, is once again popular ... this time with homeschoolers.  In addition to the set, I have a parents' volume giving ideas for using it with children, including music.  The tiny footnote on page 173 is a perfect example.  It says: The brilliant color of Brazil has inspired music as well as folk tales.  "Thou Brilliant Bird" from the opera, Pearl of Brazil, by the romantic French composer, Félicien David, has all the flare and brilliant color of the parrot.

(No, the hot-link isn't in the book, but let's not stop with Miller.)

While searching for information on Elsie Spicer Eells, because of this great little story, I discovered Fairytalez along with a mystery!  I've written the site owner, but have yet to hear back.  The site is generally very fine for lovers of public domain stories as it claims to be the largest, with "over 2000 fairy tales, folktales, and fables" and they are "fully optimized for phones, tablets, and PCs", free and presented without ads.  The mystery was information that contradicted itself between talking about Eells describing her as a female in talking about the Brazilian region but as a male, complete with portrait, on the page about Eells.  Since 1917 was pre-transgender popularity, I searched further.

Just in case it was a case of her being overlooked only online, I checked two standard biographical resources for children's authors, since most folklore was noticed by children's literature.  The Junior Book of Authors series began in 1934.  I have the second edition, so I checked the original volume at Hathitrust, but she wasn't there.  Not surprisingly, she was also omitted from Twentieth Century Children's Writers.

I was able to find the Portuguese Wikipedia article on her which gave me enough leads to find minor bits of information on Ancestry.com but she clearly preferred her privacy and letting her work speak for her.  It is interesting that the Wikipedia article notes her travels in the 1920s and 1930s in several countries as a researcher of the Hispanic Society of America of New York was something unusual at the time.  We tend to forget how early folklorists were pioneers, especially when female. The Hispanic Society of America is a free New York museum and reference library for the study of the arts and cultures of Spain, Portugal, and Latin America.  Even there, her work seems to be invisible, but fortunately her books can still be found:
I'm happy to own two of them, but also that it's possible to find her work even if I don't yet own the book where it was originally published.

I saw your Tweet and email, and discovered the mistake! There was a photo of another storyteller incorrectly attributed on another website as Elsie. I went through the Portuguese Wikipedia and discovered the error, as you did. I also found some information on her on a women in history website. The bio has now been corrected - thank you! We originally thought the author was female, but the picture was incorrectly attributed when we found it, so we thought it was a male author but I dug more and made the right corrections so she can get credit for her wonderful stories!

My favorite Eells story is the Carnation Youth.﻿

Lois: While at it, I realized I'd been thinking of the author's name as the same as the water creature.  I believe the label and blog article title have been changed to the double "l" and I went back through the article changing it.  Speaking from personal experience, people with unusual names are used to such things.
*******
Here's my new closing for days when I have a story in Keeping the Public in Public Domain.
*****************