I've posted about bees and hornets recently (and even honey if you count the World War I recipes).  Old time "Crockett Almanacs" give us yet another story of these insects and also a 19th century look at eclipses.  August 21 we'll have the first total solar eclipse across the entire contiguous United States since June 8, 1918, so eclipses are something everybody seems to be talking about now.

Talking about folk heroes seems to make them last forever.  As for politicians, maybe they just seem to never die.  Davy Crockett was both a folk hero and a politician.  He officially died at the Alamo on March 6, 1836, but "his" almanacs (1835 to 1856) were filled with Crockett tall tales supposedly written down by the publisher, Ben Hardin, who also is given in some tall tales as a friend and companion in some adventures.

Reproductions occasionally do not perfectly show a letter.  Might the type face have been just as bad in the original?  I don't know, but the language is certainly the original.  The almanacs attempt to sound and be mis-spelled as the public expected the frontier hero, soldier, and politician might have told the stories.  It is an interesting visual way to attempt hearing the backwoods language of that day.  When it puzzles you (and it will), try saying it out loud to see if you understand what is said. 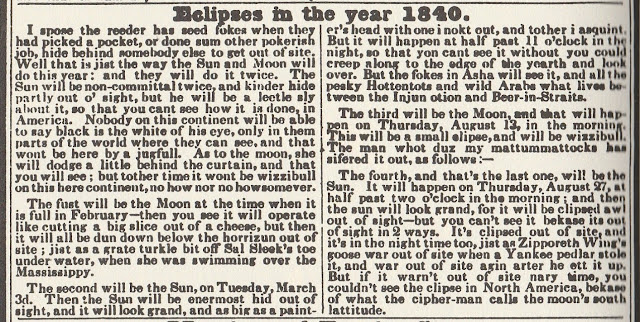 and then the story, but first a quick note.  Because the story is supposedly about a trick Crockett played on Teddy O'Rourke it opens with a description of the differences between Yankees and the Irish.  Don't let it "get your Irish up", I know mine was under control and I always, or way too often, "speak before I think." 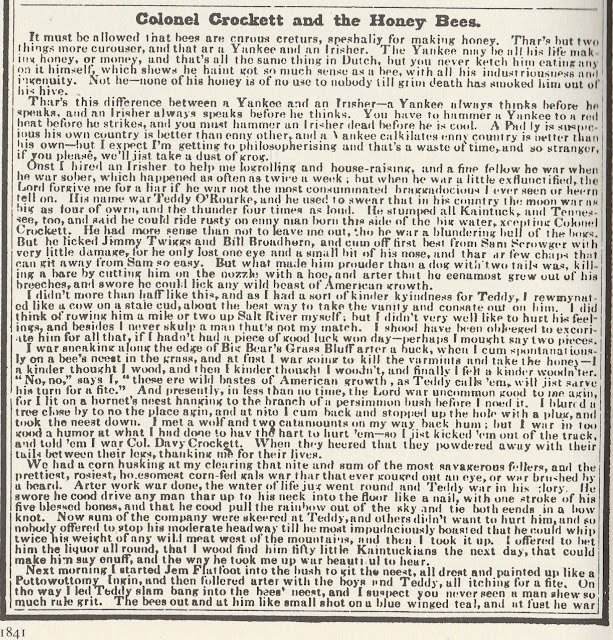 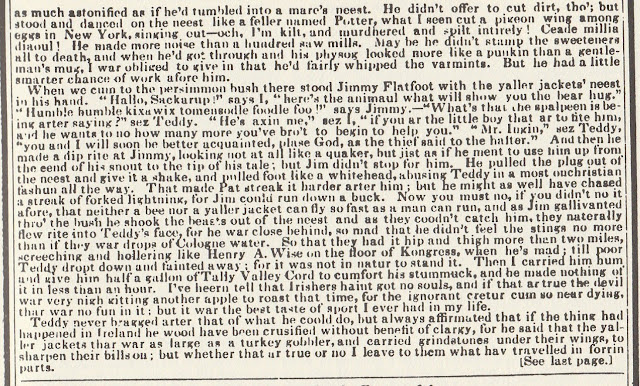 This was the picture at the end of the 1841 almanac.

Before leaving the idea of almanacs and eclipses, let's have some facts and a bit of fun.  You may want to check the almanac that is probably the most accepted since its founding in 1792, the Old Farmer's Almanac.  Here is their look at Total Solar Eclipses in the U.S.  Notice that they say "Accurate observations of solar eclipses in the 19th century were sparse until the solar eclipse of July 18, 1860."

Anybody who knows me knows I can never resist a pun, so I'll close with this lunar or loony riddle.  How does the Man in the Moon gets his hair cut? . . . E-clipse it.

O.k. stop that groaning and enjoy the astronomical mania currently happening.  Can't find truly safe solar glasses?  Here's a video on how to make your own solar eclipse viewer.

************
This is part of a series of postings of stories under the category, "Keeping the Public in Public Domain."  The idea behind Public Domain was to preserve our cultural heritage after the authors and their immediate heirs were compensated.  I feel strongly current copyright law delays this intent on works of the 20th century.  My own library of folklore includes so many books within the Public Domain I decided to share stories from them.  I hope you enjoy discovering new stories.