Did you know this month included Independence Day?...No, not here in the U.S., but on the opposite side of the globe, where two countries sit uneasily side by side with their own Independence Days one after the other.

The transition from British colony to two separate countries came for Pakistan on August 14 and India on August 15 in 1947.  Here in metro Detroit we have well-established communities for each country, but less is obvious about a possible Punjabi community.  I have told for each here, but have yet to have anyone mention the Punjab region, which was split so each country has their own Punjab state.  Punjabi culture is lightly covered by Wikipedia, but a more thorough look at both states can be found on Encyclopedia.com.

ਰਾਜਾ ਰਸਾਲੂ
Don't know all that?  If not, you probably also have never heard of their unusual folk hero, Raja Rasalu. 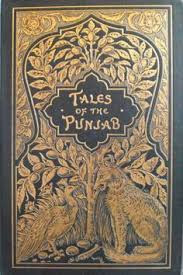 I discovered Raja Rasalu while prowling for Punjabi stories, since it would be part of each country's folklore roots.   Flora Annie Steel's classic 1894 Punjabi folktale anthology was Tales of the Punjab.  She calls him their chief legendary hero, but present day information often ignores him.  In the notes section, she also attempts tracing possible actual people and times, but concludes "his story is almost hopelessly involved in pure folklore. It has often been discussed in learned journals."  She names the journals and I could give other background here, but want to dive into the story instead.  I chose Joseph Jacobs' Indian Fairy Tales over Steel precisely because he combined and condensed the legends into a single story.  Jacobs took his version from Steel's collaboration ten years earlier with Major R.C. Temple called Wide-Awake Stories:  A Collection of Tales Told by Little Children, Between Sunset and Sunrise in the Panjab and Kashmir.  Yes, some of those stories fit the nursery tale set, but definitely not Raja Rasalu.  Her later book is so similar, I wonder how much Temple contributed as she supposedly took the legends from ballads of wandering Punjabi minstrels. 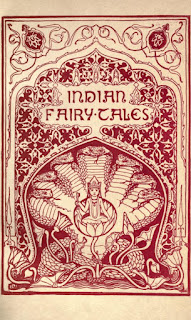 If you are familiar with storytelling Tale Types, you will see Jacobs combines several story types into his one story.  I admit Jacobs' language is a bit dated, revealing it was written in 1892.  Songs or verse also are inserted.  That's a common stylistic element in Punjabi literature.  A storyteller omitting it for normal dialog still would find this episodic tale lively enough to beg for a modern re-telling.    Sometimes that happens with public domain material because of its age.

Something else that happens is my copy of Joseph Jacobs Indian Fairy Tales has a tight binding.  Unfortunately this means sometimes you have to forgive the lettering in each page's margin.  Printers call that part of the page "the gutter."  I don't have a way to get this story out of the gutter, but think it's still worth reading.  I hope you don't mind the slight fuzziness and maybe even consider it part of the challenge of traveling back to this old tale.  If you want to read more go to Archive.org's digital copy of Jacobs' book.  They were able to copy an edition without this limitation.

UPDATE: Be sure to note the cover for Indian Fairy Tales and the various illustrations, including the humorous end illustration, by John D. Batten, who illustrated all of Jacobs' anthologies.


One quick note from Jacobs: Chaipur, I should explain, is a game played by two players with eight men, each on a board in the shape of a cross, four men to each covered with squares.  The moves of the men are decided by the throws of a long form of dice. The object of the game is to see which of the players can first move all his men into the black center square of the cross. ... It is sometime said to be the origin of chess. 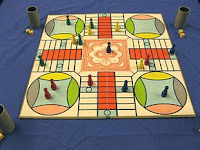 LSK: Rather than compare it to chess, we know it as the Parker Brothers board game of Parcheesi.  Unlike the story, bet you don't have dice made out of the bones of skeletons, but then you don't have to defeat enchanted dice and keep your head from being cut off either.  After you read today's story, you'll have an interesting  story to tell about the game and its origin. 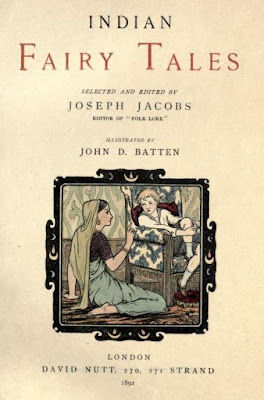 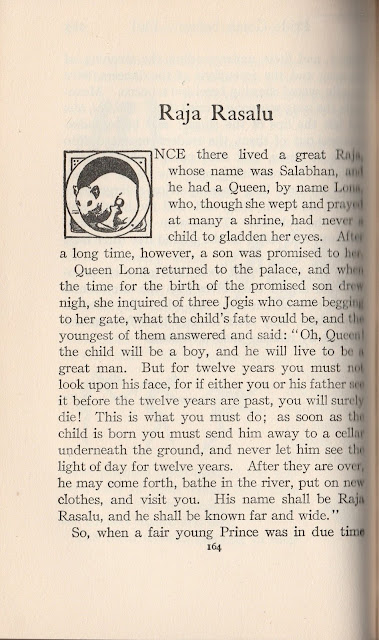 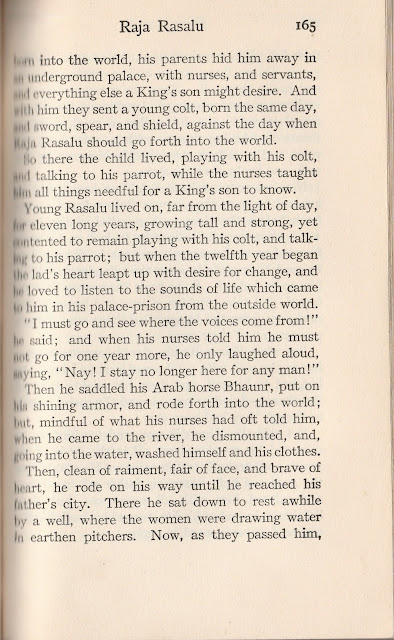 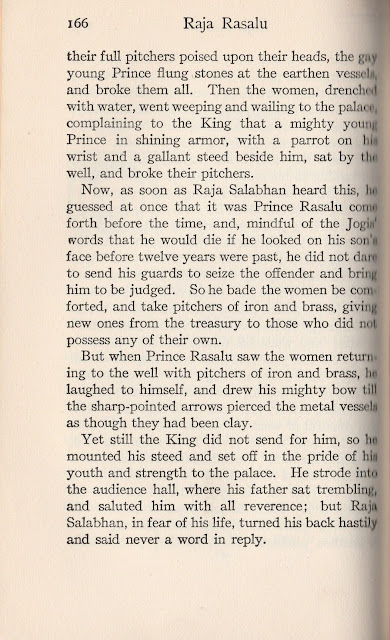 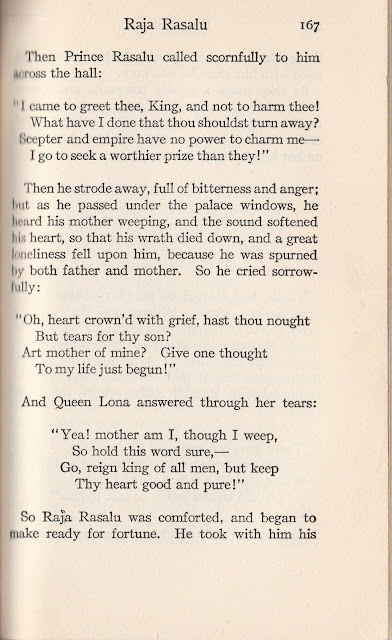 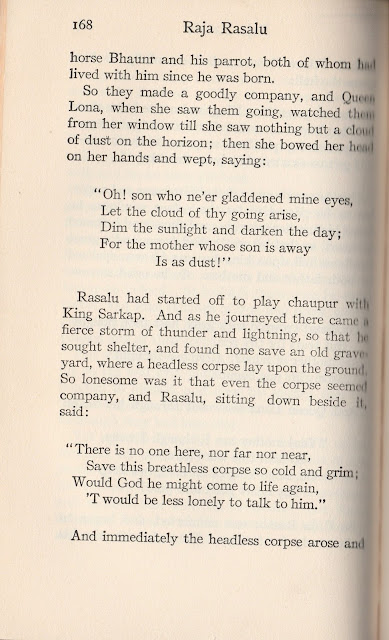 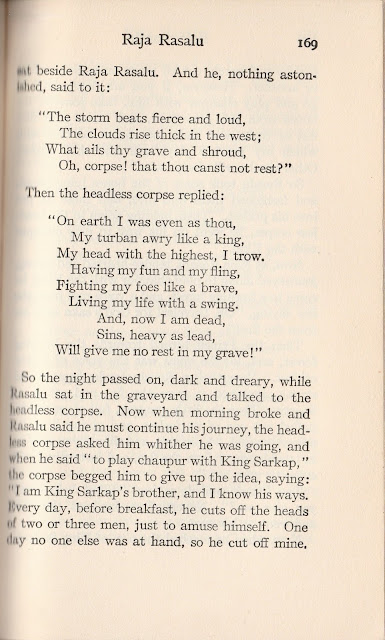 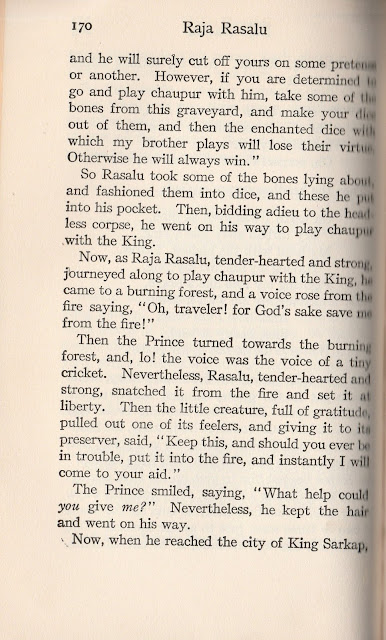 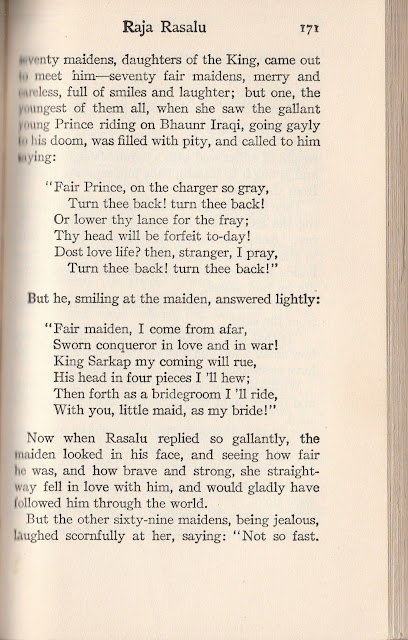 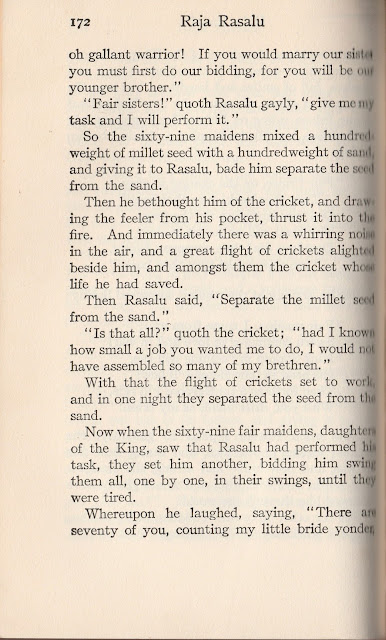 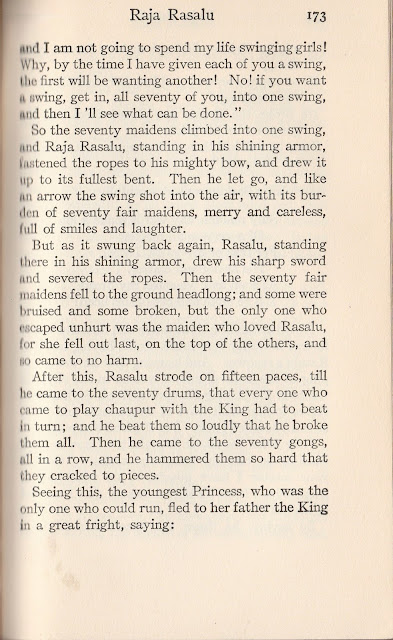 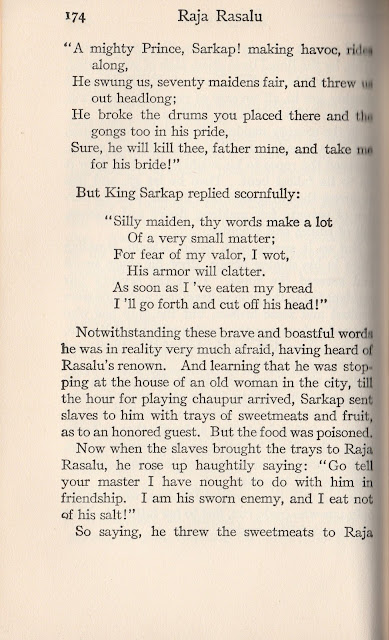 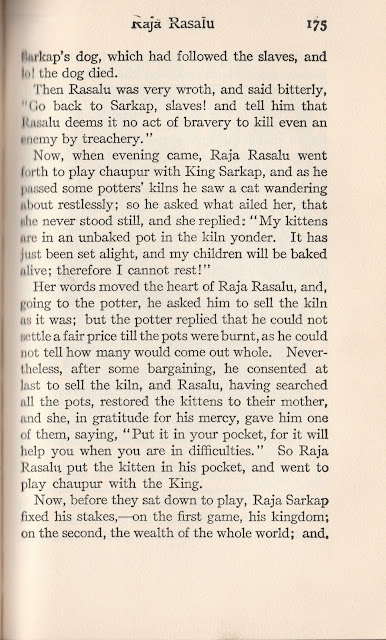 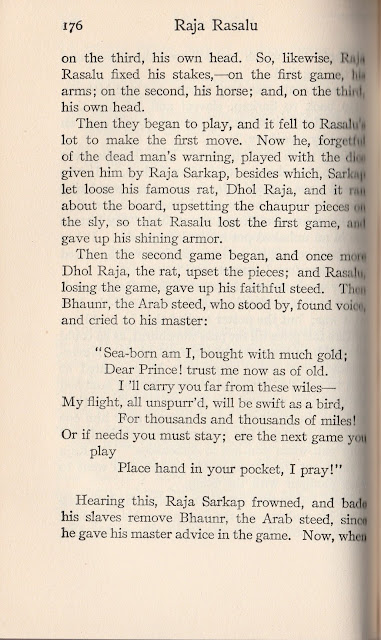 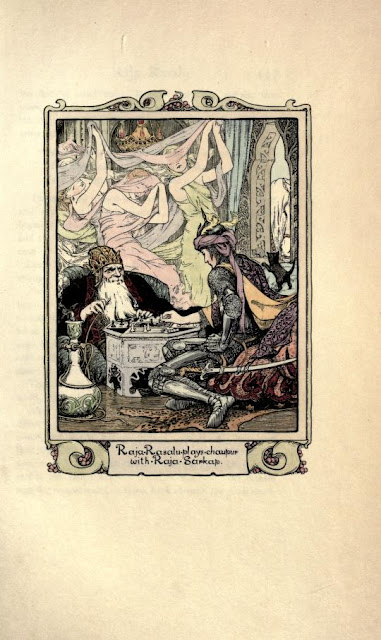 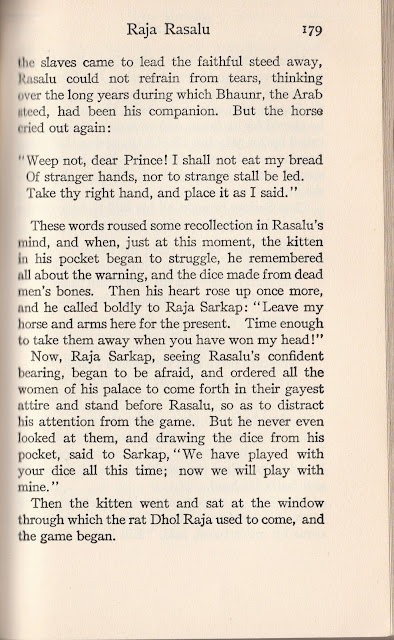 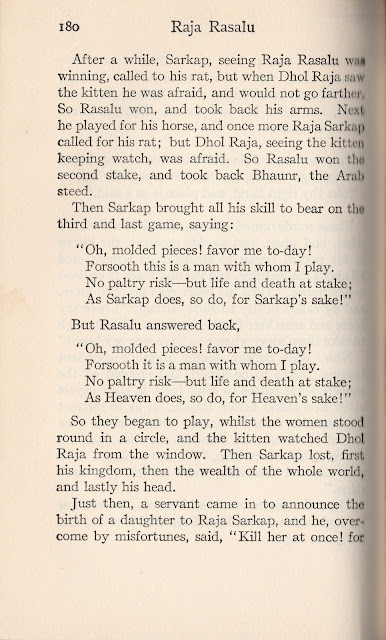 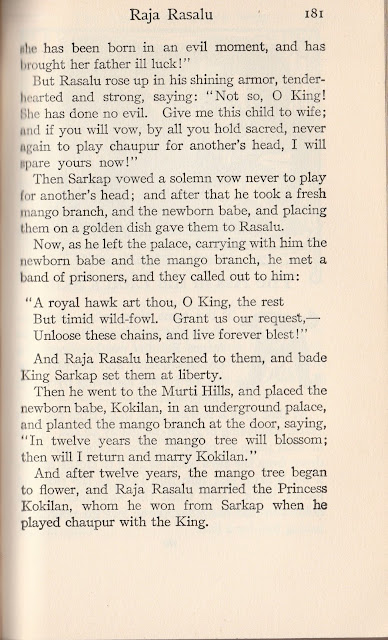 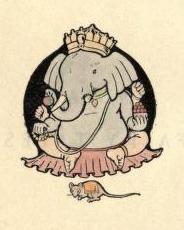 Jacobs ends the story there and, in my opinion, it's the perfect spot for a feeling of wrapping up the main part of the narrative.  If you really want "the rest of the story" (not a "happily ever after") you can check The Adventures of the Panjab Hero Raja Rasalu and Other Folk-Tales of the Panjab by the Reverend Charles Swynnerton, published in 1884, and mentioned by Jacobs in his notes.

I do like Swynnerton's closing to the Adventures and think it would fit well with a modern retelling, especially if it began with an introduction saying Major Temple believed it was possible Raja Rasalu might be a real person from the eighth or ninth century who ruled an area along the Indus River.  Swynnerton closes with: Some say Rasalu never died, that he crossed over or descended into the river Indus to lands unknown, and that, like King Arthur, he will one day return again.

That gives the story the legendary status it deserves.

On the other hand (not to be confused with the multi-armed Hindu deity, Shiva) in deciding how you might tell it, remembering the majority of Punjabi . . . Sikh and ye shall find.

Stop that groaning!  Thank heavens you don't have skeleton bones to throw.  I freely confess I would lose a game of Chaipur or Parcheesi if I had to refrain from puns, so don't challenge me to a game.