I admit I'm a "News Junkie", but this week . . . We've all heard about Pandora's Box, but how many of us have really looked at the myth and how it fits our world?  I confess it took some digging and, depending on how you translate a Greek word, there is more than one way to interpret it ... especially after a week with yet another horrific mass shooting this story's worth a further look.

No, I don't favor guns, but understand gun control laws have too many ways around them.  The slogan about "only outlaws will have guns" could become true.  All of this made me surprised to hear about part of the Pandora's Box legend worth remembering.

O.k. I'll give a hint.  The word is ἐλπίς.  What you don't know it?  The transliteration is Elpis and when I looked at the story, it makes a huge difference between whether it is Hope or Foreboding (some others translate it Expectation).  Since we're not Greeks living in classical times, earlier English versions will show why I think it's worth knowing about this long told story.  By the way, Hesiod's ancient Greek poem combines a farmer's almanac (now that's an Old Farmer's Almanac!) with the tale of Prometheus, which leads into that of Pandora, and the five ages of mankind.

Go to Wikipedia's article for the Greek word and a brief summary of a story you may think you know.  You will discover the ancient Greek says it was a jar, how it was mistranslated as a box, and also discover the importance of Prometheus and his brother, Epimetheus -- not a frequently mentioned character.  The article doesn't say much about Erasmus, who mistranslated the jar as box, but he also is the reason our early English versions use the chief Roman god, Jupiter, instead of the Greek name for the king of the gods, Zeus. Erasmus was translating into Latin and he's the source of our English versions even though authors may claim Greek mythology and Hesiod as their source
Sheesh!  Is it any wonder many find mythology confusing?  At the article's end is a very helpful summary of Wikipedia links to ancient Greek mythology and religion.

On to the story! . . . or a trio of versions plus added illustrations.

Let's start with James Baldwin's Old Greek Stories, but you will note he uses Jupiter -- although Baldwin does give the alternative names when they first appear in the book -- and see how he translates ἐλπίς.  Back in 1895, when he published it, it was a third grade reader.  Can't help wondering how many third grade classes could manage it today.  I open with the second chapter after the theft of fire by Prometheus. 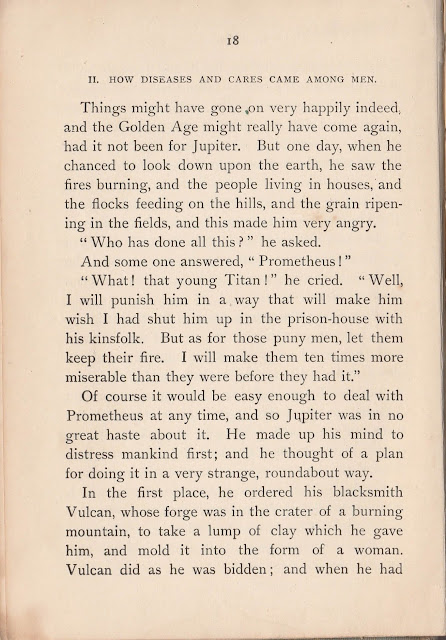 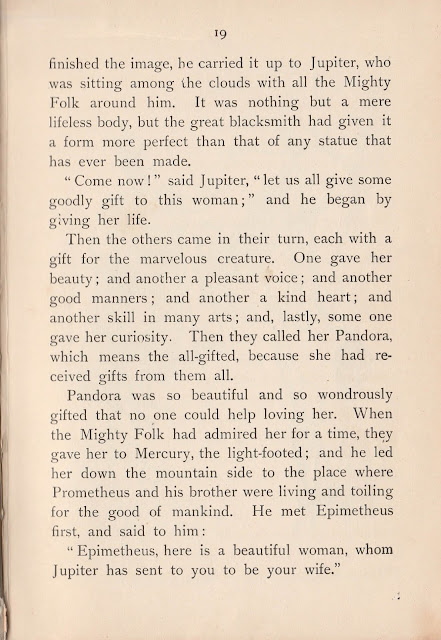 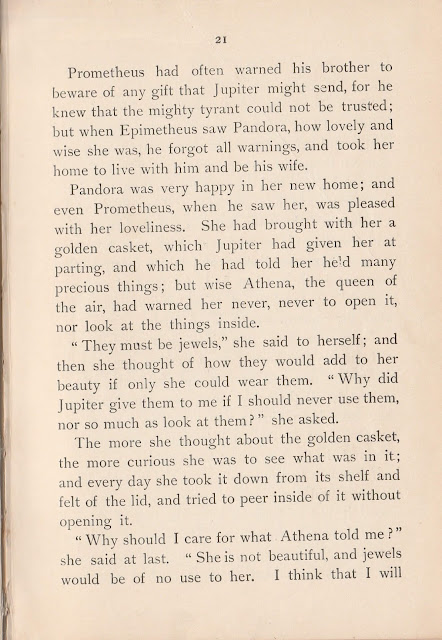 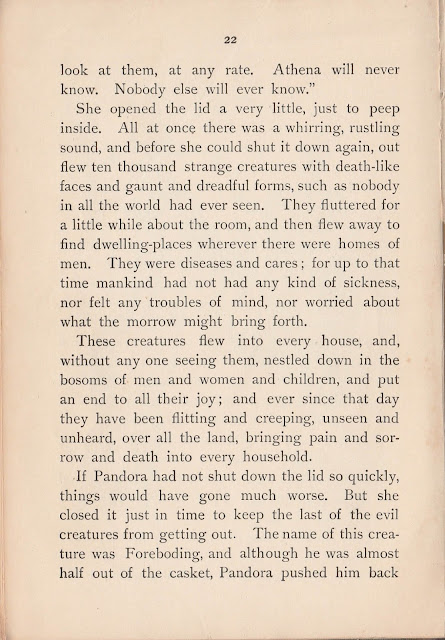 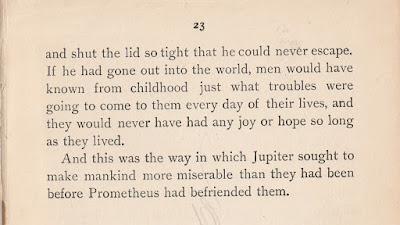 I did search online and in Baldwin's biography in The Junior Book of Authors, but the illustrator remains ignored, even among all the Pandora art at Wikimedia Commons.  Here's another illustration from that collection of Pandora art which seems to hint at Foreboding.

So Baldwin used Foreboding and considered it good to have it trapped and unable to escape.

What started me on this search was hearing that Hope was in the box.  Here's the version librarian, writer, and anthologizer of many folktales, Frances Jenkins Olcott, crafted in The Wonder Garden.  She claims it's "Retold from Hesiod and Other Sources", but I notice her use of Jupiter.  Still she tells a good story, while keeping it simple. 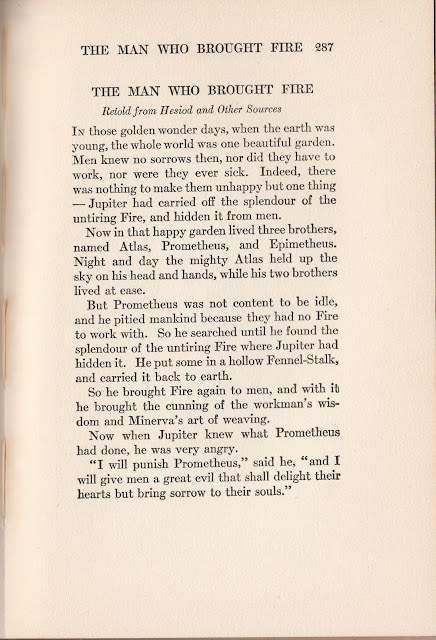 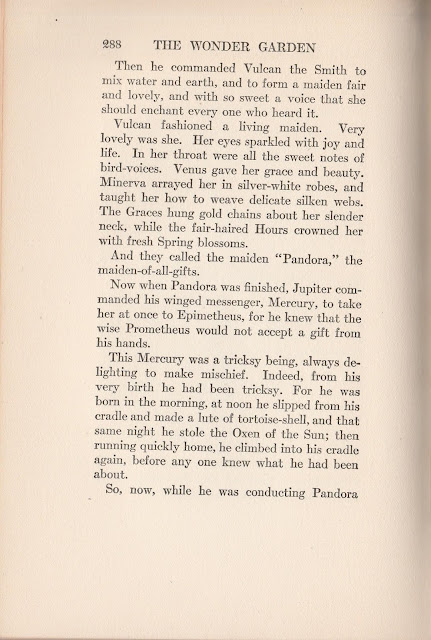 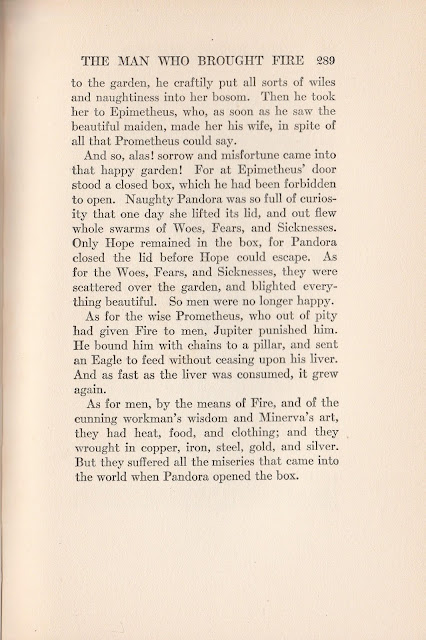 Thomas Bulfinch is even more succinct in his The Age of Fable, keeping it to a single page if we pick the story up where Pandora appears. 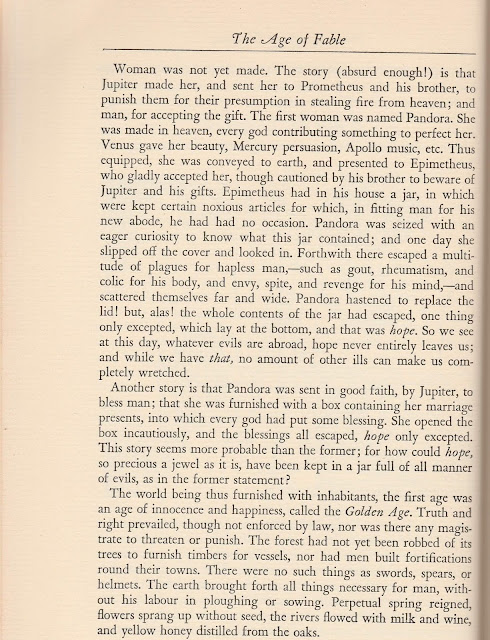 I bothered with this, not only because Bulfinch is a standard reference to mythology, but also because he discusses the role of hope keeping us from becoming "completely wretched."  I also find interesting his discussing the other idea that she was sent in good faith to bless man.

Because Pandora was the Greek's name for the first woman, many have compared her to Eve.  A more recent book, Classical Mythology by Mark P.O. Morford and Robert J. Lenardon was begun with its first edition in 1971.  It's often used as a textbook or reference book for the topic.  Classical Mythology discusses the Biblical Eve comparison, but, more important to today's discussion, Hope is questioned if it's a "good" or an "evil."  Does it help us survive life's terrors or prolong the misery?

To see no hope or to see it as only prolonging our misery seems to me as deserving the label of Clinical Depression.  I have an idea for working with that hope which I plan to discuss next week.  Until then, one source I didn't use because the story is so changed by the author, Nathaniel Hawthorne, in his A Wonder Book for Girls & Boys (on pages 78 to 99) , but the title continues "with 60 Designs by Walter Crane"and they are a story unto themselves.  So however you view the story, I hope you enjoy Crane's artistic vision. 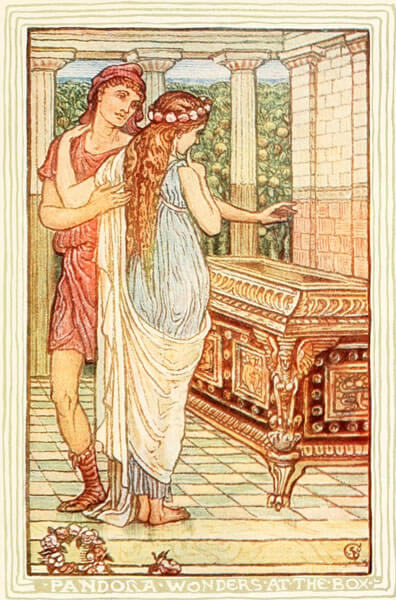 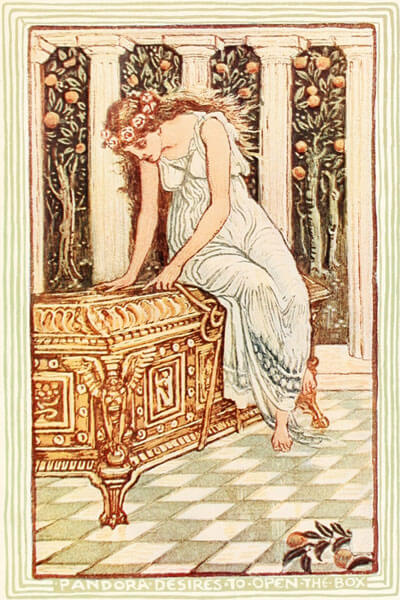 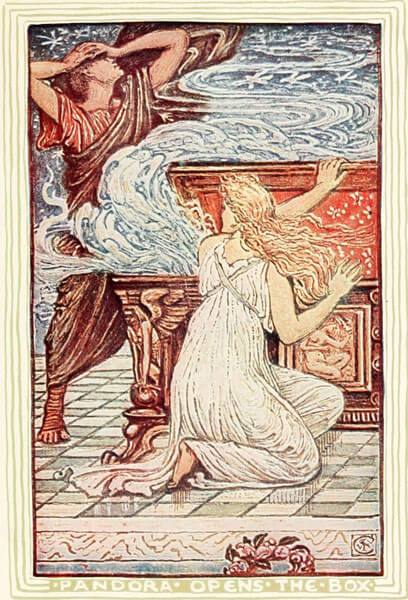