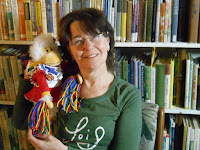 Evil will always find a way, but now is the time to train our children to Build a Better World.  Character education needs to happen if we want to grow better adults.

Priscilla Gorilla helped lead cheers about reading and more this past summer when Build a Better World was the summer reading program theme in libraries across the country.  There's a reason I think those cheers are still important. It's called an "earworm."

Sounds bad, but it doesn't need to be.  You've had earworms before when a song gets in your head and refuses to leave.  Cheerleading, like songs, can stick with you, popping out when needed or even unexpectedly.  A perfect example of that is an incorrect saying: Sticks and stones may break my bones, but names will never hurt me.  O.k. we know that's not true or verbal bullying wouldn't be a problem.

Here's a picture of the building blocks from which audiences can choose to hear stories and cheers. 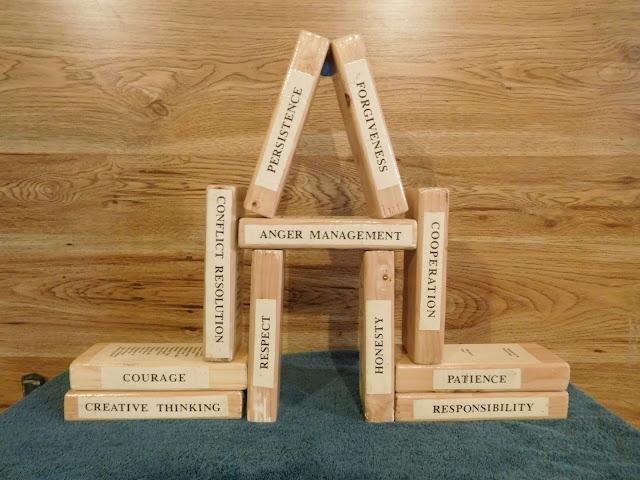 Not everyone can experience those stories, but these two past blog articles from 2017, June 17 and January 28, tell a lot about the program including several of the stories. Topics are Anger Management, Conflict Resolution, Cooperation, Courage, Creative Thinking, Forgiveness, Honesty, Patience, Persistence, Respect, and Responsibility.  Only one cheer, the one for Anger Management, has been posted and I'll repeat it here and the actions are given in parenthese.  Then come the others to use as your own resource.
Hey you angry folk
Come and clap your hands (clap, clap)
Stomp your feet (stomp, stomp)
You've got the beat (clap, clap)
Feel the groove (clap, clap)
Start to move (stomp, stomp)
Now have no fear / Take it in one ear
Just wait and send it out
Yes, twice just shout it out:
IN ONE EAR AND OUT THE OTHER!
IN ONE EAR AND OUT THE OTHER!

I forgive you.
It doesn't change the past,
but it may change the future.

Build it up
BUILD IT UP
Let's get to it.
BUILD IT UP
You can do it --
BUILD A BETTER WORLD

Of course repetition is so important.  When used in schools, it's a vital resource for teachers to use again and again.

I hope schools can bring this program to their schools as they have daily exposure to the problems and the daily opportunity to cope with it.  The wisdom of the book of Proverbs 22:6 is the earworm coming to me as I close this: Train up a child in the way he should go: and when he is old, he will not depart from it.