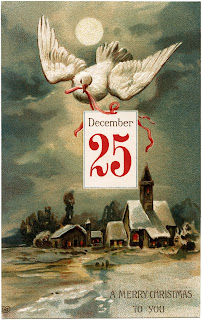 The furlough of the Fifth offered the Free Press an opportunity to show some support for the Fifth. The newspaper used it as an opportunity to do a good job of giving a retrospective summary of all they have experienced so far.  To my mind it smacks of "too little, too late", but it's up to you if instead it is "better late than never."  At least the writer made it clear that the members of the Fifth Infantry were respected -- even if the newspaper at other times offered criticism of the war itself and President Lincoln.

At the end of today's article you may choose to look for my personal Excuses and Frustrations Rant.  A few comments follow it in bold print to wrap things up. 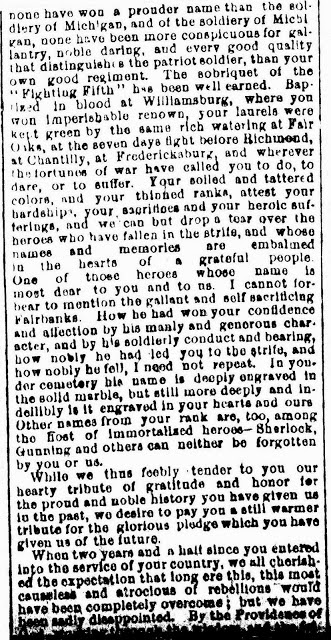 In
mid-February coverage will return to the Detroit Advertiser and Tribune.  The Detroit Free Press will wait until warmer weather heats up the action to a point where they feel unable to ignore it.  (See below my Excuses and Frustrations Rant for the conclusion of the Civil War Christmas series.)

Now the previously promised Excuses and Frustrations Rant -- definitely optional "behind the scenes" information:
I had the choice of dealing with a slanted microfilming and decided to let it lean.  However that meant I couldn't make the text as large because the slant on the second segment moves into the sidebar.  I also made the choice to keep the text as close as possible to roughly same size even if some segments might not touch the sidebar.  Then I decided to change text size, however, on the second column as it reproduced lighter if kept to that size.  So much for being consistent.  There also is that curse of microfilming, a small fold in the newspaper, but worse still the bottom of the column was illegible.  That was the first of two spots where information was missing.  I have my own shortcomings in producing this material to remind me the human element needs to be considered.  Surely the person or persons microfilming the newspapers tried to do their best in the shortest amount of time.  I presume time was at a premium with pressure to finish as quickly as possible because of the cost of paying the microfilmer needed to be kept as low as possible.  Similarly I find a day at the Library of Michigan is an attempt to capture the most information in the best condition possible.  Those days can have equipment difficulties including sharing the only machine that lets me save articles on a flash drive.  I've been able to do this twice a year.  Today's microfilm leaves me most apologetic.  It looks as if somehow I omitted Lieutenant Colonel Pulford's speech.  It's impossible at this point to include it.  Considering the difficulties in getting everything quickly found and saved, it's probably surprising this didn't happen before.  It doesn't make me happy that it happened at all and I offer my apologies for it.  Maybe someday the original hard copies will be available for online digitizing.  As long there is public domain availability for such digitized material it would be most welcome.  Until then, this blog will present the best microfilm I can offer.

Unlike previous years, because furloughs had the Fifth home briefly, there is no specific mention of the holidays of Christmas or New Year -- although it was a wonderful holiday present.  Christmas news ordinarily appeared later in January of the following year and would have been published in early 1864.

At last the final year of the war arrives in 1865!  Christmas that year has all who were fortunate enough to have survived back, home trying to get back to a "normal" reunited United States.  The fact that Lincoln is assassinated and then the trials and executions occur show "normal" may be a long time coming for all sections of the country.  In 1870 President Grant names Christmas an official federal holiday in the hope it will help unite the nation.

(This is a quick note from LoiS: The wonderful pictures on the Old Design Shop blog are a gift from Julie, the owner of the Etsy Old Design Shop.  They fit these three Civil War Christmas posts -- which sometimes frankly can be a bit bleak just giving the newspaper accounts as the war progressed -- so I suggest the first link for lovers of vintage artwork and hope you will sign up for her blog there and then go on to her Etsy shop to see if there is something you might like to buy.  Scrapbookers, teachers, lovers of antiques, I recommend it to you.  I'm so happy with Julie's work from her large Gallery on the blog and her generosity there, that I included this credit to their source with each of my Civil War Christmas posts with this explanation.  Initially I said it would open the posts, but this expresses my Christmas wish for you, so I've moved it here to wrap up this series of posts.)