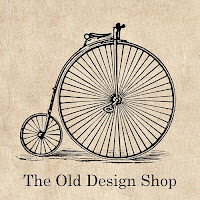 (This is a quick note from LoiS: The wonderful pictures on the Old Design Shop blog are a gift from Julie, the owner of the Etsy Old Design Shop.  They fit these three Civil War Christmas posts -- which sometimes frankly can be a bit bleak just giving the newspaper accounts as the war progresses -- so I suggest the first link for lovers of vintage artwork and hope you will sign up for her blog there and then go on to her Etsy shop to see if there is something you might like to buy.  Scrapbookers, teachers, lovers of antiques, I recommend it to you.  I'm so happy with Julie's work from her large Gallery on the blog and her generosity there, that I will open each of my Civil War Christmas posts with this explanation.)

Historic Fort Wayne is where the Fifth Michigan Infantry and many other regiments began by spending the summer of 1861 preparing.  By Christmas of 1861 they were part of the Army of the Potomac away in Camp Michigan near Mount Vernon.  Shortly before Christmas there is a report from there in the Detroit Daily Tribune.  There is no newspaper account about Christmas until January 9 in the Detroit Free Press.  For a taste of Christmas of that time, although they were not indoors in Camp Michigan, I want to recommend the page on the Historic Fort Wayne Coalition's website showing their Civil War Christmas celebration just held last week and annually.
The Fifth mustered in after the disaster at 1st Bull Run and Lincoln didn't issue his first special war orders until Jan. 31 of '62, asking the Army of the Potomac to move "before, or on, the 22nd day of February."  Their action built gradually, but definitely.

LSK: Mrs. O'Donnell is the wife of Lieutenant William O. Donnell, Company C from Saginaw (my label misspells it “O'Donnell”). This is from the Roster at https://www.migenweb.org/michiganinthewar/infantry/5compc.htm but somehow both the correspondent for the Detroit Daily Tribune and the Detroit Free Press, while spelling it differently, think that's the name. 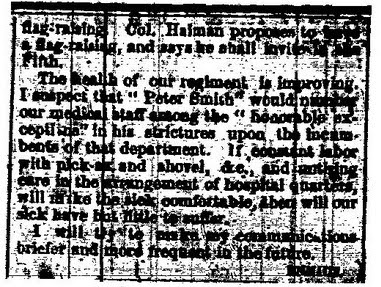 Ennius closes with "I will try to make my communications briefer and more frequent in the future."  As the war finally heats up they will indeed become more frequent.
Next on  the 1862 page, January 9th, is the posting here of the Free Press article about the Fifth's Christmas.  The delay in getting a report to the Detroit newspapers occurs regularly.

Lois: Once again I feel apologetic about the quality of these microfilmed newspapers, but know I did what I could to clean up safely the articles using the accessory, Paint.  It's admittedly crude.  Some of the clarification of this article came from alternate filming by John Braden.  In the meantime know that the Fifth Infantry articles will start to increase as they began to see more action. Also note that the Free Press correspondent calls her Mrs. O'Donnell.
3d Michigan Regiment Band, Ada Worden, Camp Michigan, Captain Trowbridge, Christmas, food, General Richardson, John Braden, Lieutenant Dennison, Mrs. O'Donnell, Mount Vernon, Pohick Church, Richardson Brigade, S.B. Curtis

Here's a bit of clarification of a few things in the following article.
The heading is: From the Fifth Regiment with this subheading - In Camp Christmas Among the Soldiers - A Scouting Party - A Rencon-tre (sic).
The date it was sent to the Free Press was January 2d, 1862, which shows the delay receiving and publishing it.
The article begins: The winter air of Virginia freezes the fingers of our troops as severely as does that
of the Wolverine State, and letter writing is but a painful pleasure...
The crease further down, after talking about Mrs. O'Donnell, states: Like the good angel of the fairy legend, her presence is visible everywhere...

That alternate film cannot be cut apart, but it reveals these final two paragraphs (note also a different spelling of the lieutenant's name from the second article which follows this one).

From John Braden:
And now to come to a piece of news which will present the other side of camp life. Lieutenant Denison, Company I, of this regiment, while in charge of a few men who were ordered to accompany a body of cavalry on a scouting expedition towards Pohick Church, was fired upon by a body of rebels lying in ambush, and wounded, a rifle ball passing through his under jaw and out of his neck.  The wound is a serious one, though not dangerous, and will probably compel the gallant Lieutenant to return home for a time to recruit his health.  I am gratified to be able to say that throughout the affair he behaved with great credit to himself, evincing a quiet, determined courage, which with the bravest of men is commendable, and although our party was obliged to retire they did so in good order, without losing a man, while two newly made graves showed the next day that our firing had done some execution.  Such little encounters as those which occur now and then, serve to keep up a healthy excitement which cannot fail to be productive of good to the cause whenever the hour arrive for us to enter a general action.
It is understood that there are some officers to be sent home on recruiting service, as our regiment needs a few men.  Are there any laggards behind? If so, let them leave the everyday life they are leading and come forward.  Now is the time to join their brothers in arms.  Will they remain at home in the hour of their country's peril and at the moment when the army is about to march on to victory?  Let those remaining behind enroll themselves at once that they may in after years be enabled to say: "And I too was there."

* * *
I am grateful to fellow researcher on the Fighting Fifth, John Braden, for his generous sharing of additional material that adds to a view of this same period.  It comes from an unknown newspaper, found in a scrapbook put together by Ada Worden starting in 1861.  Not only is the newspaper unknown, but the first page also is no longer in the scrapbook and, just as with the illegible parts of the Free Press, not everything can be seen.  In some cases Ms. Worden wrote what was illegible even at the time of obtaining the newspaper.  Even with those important omissions it is worth adding to the information given in the Detroit Free Press article as a useful supplement, even clarifying the name of Lieutenant Dennison, who was shot.  The article's author, S.B. Curtis, I had hoped to turn up in future research so I could update this date.

While those articles reach into more than a week in 1862, imagine the families waiting to see the articles and receive equally delayed mail.

Next week will be Christmas of 1862 with a similar delay.