The Detroit area families entered the holidays of 1862 receiving only attention in the Detroit newspapers immediately after the battle of Fredericksburg.  I won't post those articles here (see the sidebar, 1862-Michigan's "Fighting Fifth" Infantry in Civil War , and scroll to the end of the year if you want to see them).  I will give only their labels of topics as they may be what Michigan families saw at home, causing considerable woe and worry.

The aftermath of Fredericksburg continues on Christmas eve in a fuller list of those recognized as killed in action.

The correspondent G.W.W. sent this on December 24, so it's publishing was delayed by a week and a half until January 3.  During that time the families and friends had only reports of casualties.  This finally gives a more hopeful update.  It also shows that Christmas dinner for the Fifth was hard bread and salt pork.  To add insult to their situation, they saw other regiments who did far less receiving accolades while they are a "war-worn regiment." 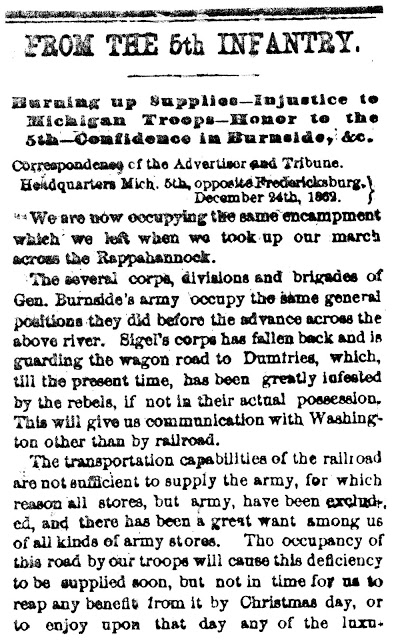 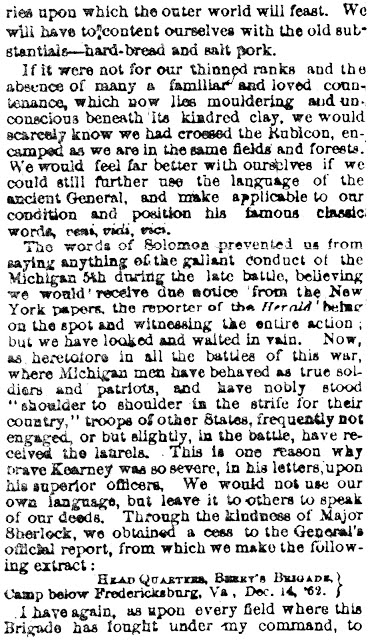 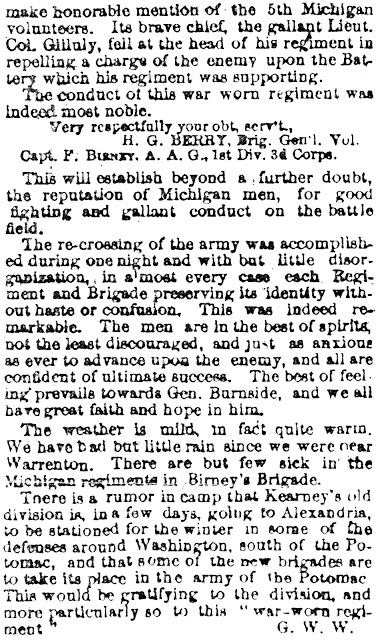 As they say in Infomercials, "but that's not all!"

Correspondent G.W.W. is published ten days after his delayed Christmas eve letter.  That holiday wasn't as good for them as New Year's.  The same issue also gives brief notice of Lieutenant George Bolio's resignation of his commission and return home.  No mention is made of the lieutenant's condition, only that he had "very complimentary testimonials as to his conduct at the battle of Fredericksburg." 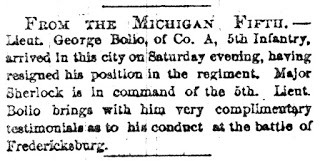 This letter from G.W.W. may have its difficulties in clarity, but the Library of Michigan microfilm had the opposite side bleeding through on my own version, so I'm delighted that John Braden had a copy as good as this.

New Year's is a time of hope for  something better coming, but 1863 (published in 1864) is rather a time when the war continues with full fury.  Will Christmas 1863 be any better?  (Hint: The military sometimes recognizes the need for a furlough!)
(This is a quick note from LoiS: The wonderful pictures on the Old Design Shop blog are a gift from Julie, the owner of the Etsy Old Design Shop.  They fit these three Civil War Christmas posts -- which sometimes frankly can be a bit bleak just giving the newspaper accounts as the war progresses -- so I suggest the first link for lovers of vintage artwork and hope you will sign up for her blog there and then go on to her Etsy shop to see if there is something you might like to buy.  Scrapbookers, teachers, lovers of antiques, I recommend it to you.  I'm so happy with Julie's work from her large Gallery on the blog and her generosity there, that I will include this credit to their source with each of my Civil War Christmas posts with this explanation.  Initially I said it would open the posts, but the somber nature of Christmas 1862 leads me to move it here.)