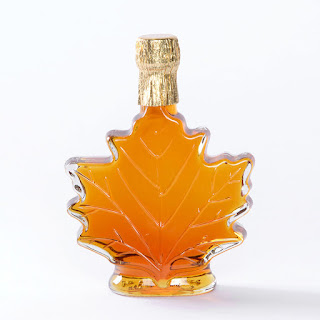 It's maple sugaring time in Michigan!  Storyteller/Librarian Darlene Williams is a member of our local storytelling group, North Oakland County Storytellers, and this month she barely had time for the group meeting because right afterward she must make the trip north for maple sugaring.  Over the years I've known her, she does this without letting anything stop her.  As she continues to build her storytelling repertoire, I wanted to give this story as a gift to her. . . and other lovers of maple syrup.

Today's story required a bit of detective work. At the risk of giving away the ending . . . 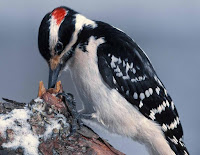 That Hairy Woodpecker on the right is my bet for the bird in the story, but it could also be the Downy Woodpecker who's a bit smaller and a tiny bit of difference.  Had no idea there was such diversity among woodpeckers, but those two are more likely to search the living trees and find sap than other woodpeckers who stick to dead trees.  Go to the Cornell Lab of Ornithology site called All About Birds for all manner of bird information, including those feathered, but barely red-headed percussionists, the Woodpeckers. 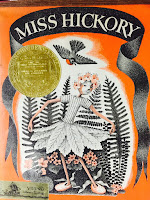 More troublesome is locating the original source of today's story.  Carolyn Sherwin Bailey's stories are always well-told, but like many from the early twentieth century, she fails to identify the Native American source of today's story.  Since she was also an author of many of her own stories including the Newbery Award-winning Miss Hickory, it's not surprising that her 1918 book, Once Upon A Time Animal Stories just says "by" her, rather than "retold by" her.  Even her book's introduction, while mentioning the universal interest in animal stories, including the Native American, just says:


This interest, and the indirect moral teaching of many of the stories included in this volume, give them a point of departure over and above that held by the modern story.

I believe it was probably the Lenape, often called the Delaware, whose story inspired today's tale.  No other version I could find comes close, but even Native American sources refer to it as an "Unknown Legend."  I will say a bit more following Bailey's tale, which goes into maple sugaring, my own inspiration for today's article. 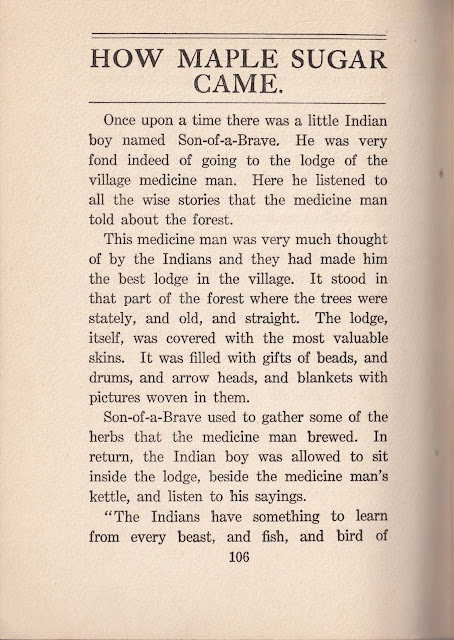 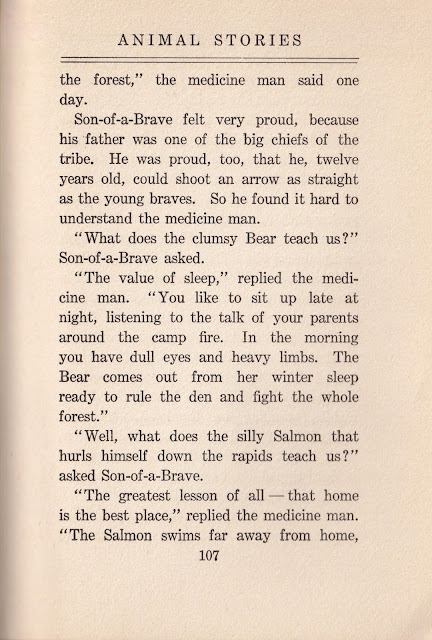 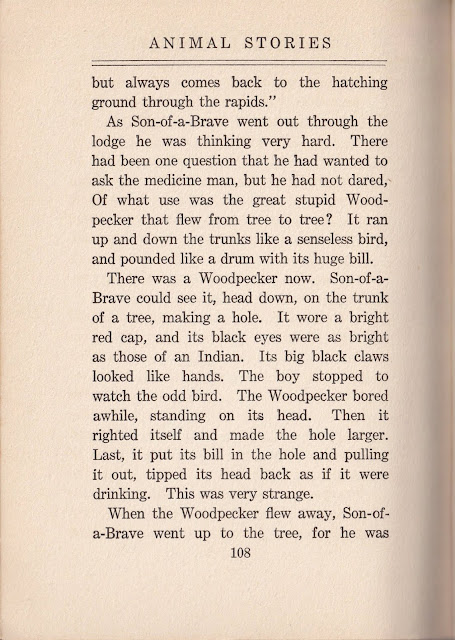 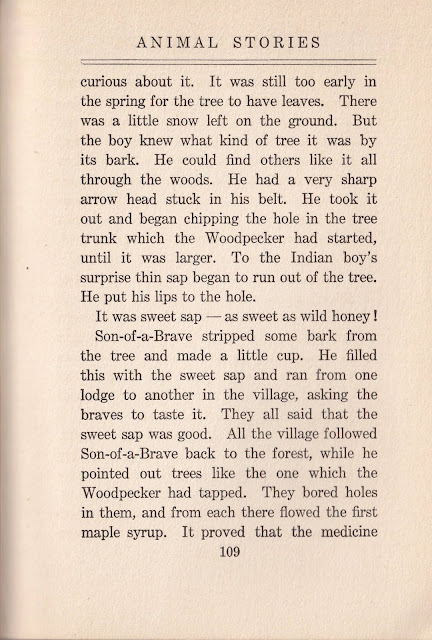 I confess this tale of a young boy learning from a medicine man of the many benefits from observing animals strikes a note with me when I remember my own time with an Anishinaabe medicine woman and asking similar questions.  For example I asked about the fly and she pointed out their important role in decomposition.

Bailey wrote and anthologized over a long productive 86 years.  She began publishing her work at age 19.  She also believed in combining instruction and entertainment in her many works for children.  (Can you tell she was homeschooled?)  Soon it will be time for librarians to bring out her 1945 picture book of The Little Rabbit Who Wanted Red Wings.  She kept writing with a book called Flickertail about "The trials, tribulations, joys, and fun experienced by a family of gray squirrels, especially Flickertail!" coming out in 1962, the year after her death.  There's more information and stories from her here on this blog, but go to this link for a bit more about Carolyn Sherwin Bailey , including listing her many books.  Many are now in Public Domain, but there are still so many like Little Rabbit... waiting.  I hope you won't wait to discover this talented author.

Once you are there, go to the top of the page and click on Legends and scroll down to Legends T-U and among Unknown Legends you will find "The Sugar Maple (Axsinaminshi)." Bailey's version omits the part about the maple tree's intense itching.  For anybody with winter dry skin or another reason to want to scratch, you will appreciate the way this "Unknown Legend" talks about it.  The story does end by saying "It was from the Woodpecker, that our Lenape'wak learned that trees give sap and can be tapped."

There are many Native American legends about maple syrup.  Maybe next year I'll give the Anishinaabe tale about how the laziness of people led to the difficulty in maple syrup being harvested.  That maple syrup you buy doesn't give you a clue about what is involved!