Lang - Fortunatus and His Purse - Keeping the Public in Public Domain 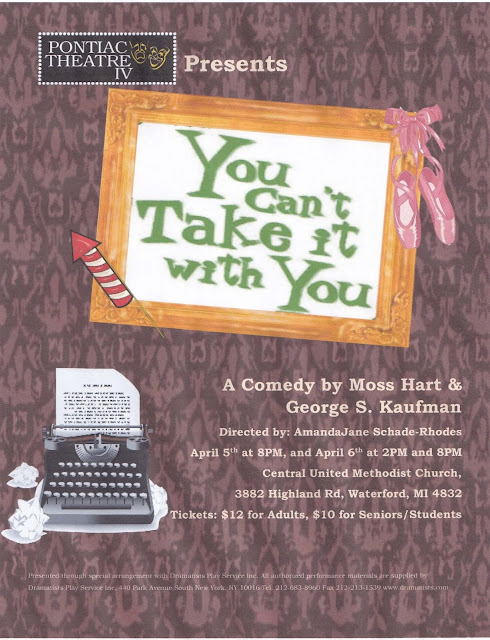 When a story gets indexed a lot, you know it's important.  Today's story came up when I went looking for something about money.

Yes, I'm in this classic show about how the pursuit of money is foolish.

I play the drunken actress, Gay Wellington, and am having a BLAST!

The production is shaping up to be a lot of fun.  Something I discovered recently, if you compare it with the movie version.  The play is actually gentler and less dogmatic, but very relevant to today.

Due to a venue scheduling problem we have a very limited run.  If you're in the area, I hope you catch it!

Now about that story.  Andrew Lang, in his Grey Fairy Book, offered "Fortunatus and His Purse" which has German roots and was even a famous Elizabethan play.  My copy of the Grey Fairy Book is an elderly paperback, so I'm reproducing the plain text as offered at Sacred-texts.com , but don't let the "Sacred-texts" put you off this story.  Yes, our ancestors found wisdom in it, but this is one of their folklore offerings.  Browse their site for a wide range of "religion, mythology, legends and folklore, and occult and esoteric topics." The plain text version of the story lacks the H.J. Ford illustration of Lang's book, so I include it and close with a different artist at the end before going into more about the story.

So why did this simple magical purse intrigue our ancestors?

Here's another question, did the story seem incomplete to you?

It did to me, but I couldn't imagine Lang changing it.

The very reason this story fascinated people like Dickens and Thomas Jefferson is contained in the part we're missing.


I was so unlucky when very young, as to read the history of Fortunatus. He had a cap of such virtues that when he put it on his head, and wished to be anywhere, he was there.

Interesting.  That same page I linked on Lee's site explains by telling us the "rest of the story."

Patrick Lee’s Explanation
The honest leader indulges in “what if” once in a awhile.
Kevin Hayes explains in The Road to Monticello, P. 16, where both excerpts are found, “ … The History of Fortunatus told a fantastic  tale about an adventurous man who acquired an inexhaustible purse and a magic cap that made him not only invisible but also transported him anywhere he wished to go.  The work was so widely known that Fortunatus’ purse and cap had become proverbial.”
Jefferson was not a widely-traveled man, literally.  He saw the territory between home and New York in his official capacities, plus five years in France, where he also visited Italy and England. The remainder of his time was all spent in his native Virginia. Figuratively, though, he might have been the most well-traveled man in the world, through his libraries. Books became his “cap of Fortunatus,” allowing him to go anywhere, anytime. (The magic purse alluded him, however!)
Two caveats:
1. Fortunatus, who chose wealth and self-indulgence over wisdom, willed his cap and purse to his two sons, whose jealousy and greed did them in.
2. Jefferson was still pining for Maria Cosway, who had left France several months before. Hayes’ excerpt of this letter ends with these words, “Yet if I had it, I question if I should use it but once. I should wish myself with you, and not wish myself away again.”

Point 1 reveals the missing part about how his sons let their jealousy and greed do them in so that the warning from Dame Fortune is the result.

If you go to the link Lee gives, you can go to the Fictional Characters and discover the story traced back to a legendary German hero of the 15th and 16th century and the Elizabethan play by Thomas Dekker which takes the story and complicates it waaaay beyond the original.

That German book is what influenced Jefferson, Dekker, Dickens and more.


The sons, Ampedo and Andolosia, shown at the feet of Old Fortunatus, are Lang's omitted conclusion

So would you tell the story and end without those boys?