Look Out! The Yule Lads Are Coming!

If you're a triskaidekaphobe (fearing or hating the number 13 and, especially, Friday the 13th), this year's December, Friday the 13th, gives you a double reason to Look Out!  for the Yule Lads Are Coming!  They always start one at a time on the 12th, each joining his brothers, and continuing through Christmas, finally leaving one at a time through the 12 Days of Christmas.

They began as a 17th century tradition meant to keep children being good for Christmas.  It changed over time to 13 Santa-ish characters leaving small gifts and playing pranks.

A storyteller I remember from back in the days of Flint Area Story Tellers, Stephanie Brewer, every year at this time would bring out little rustic troll figures and share the Icelandic tradition of the Yule Lads.  She's been gone, telling in the Great Beyond for several years now, but I've looked to find some of those troll figures for several years to share their story.  Hers were not the figurines sold for a set at $249 USD.  (Definitely beyond my budget.)  Thanks to the internet I now know much more, including a more affordable way to present them.  I searched  Wikipedia; the Icelandic promotional site called The Big Picture from Inspired by Iceland; an Icelandic online news magazine - ; an unusual blog called  Cryptoville.com; an archived webpage on poet Jóhannes úr Kötlum; his publisher Griffla's Facebook page; and Griffla's own webpage for Christmas Is Coming. 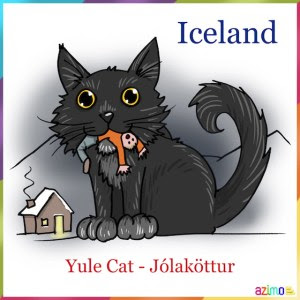 The Wikipedia article gives you a chart with each lad's characteristic and date of arrival and departure.  It also mentions something not in the poem, "Christmas Is Coming", the ancient tradition of the family having a huge, vicious Yule Cat who eats people not having new clothes for Christmas!  This is explained as a farmers' incentive "for their workers to finish processing the autumn wool before Christmas. The ones who took part in the work would be rewarded with new clothes, but those who did not would get nothing and thus would be preyed upon by the monstrous cat."  A milder form of activity is "merely eating away the food of ones without new clothes."   For more on the Yule Cat, including that illustration, go to Cryptoville.com's article on "Iceland's Killer Christmas Cat" including a poem all his own again by Jóhannes úr Kötlum.

I've finally found a way to tell about the Yule Lads using these illustrations from The Big Picture, which can be made larger and taken one at a time. 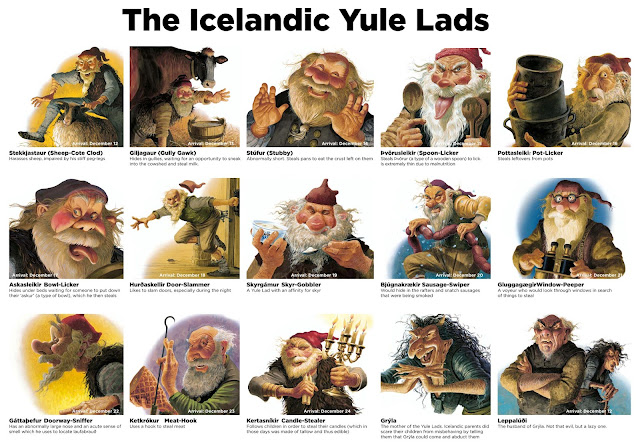 I've no idea who this modern artist was.  I did send off an email requesting permission to use their webpage.  I received an email from Inspired by Iceland that began
Fortunately that was followed by its English translation
Well!  I may need to take down the composite illustration here depending on what they require.  I hope not, but my telling about the Yule Lads now has an illustration for each individually.

To be perfectly honest a story needs a plot and the poem doesn't have a lot.  In the 17th century it began as "Poem of Gryla" and was about their "hideous...mother of the gigantic Yule Lads who are a menace to children."  As often happens in really old folklore, bad children were eaten.  The King of Denmark objected to that.  Over time their characteristics changed, finally in 1932 the Icelandic poet, Jóhannes úr Kötlum, made a poem that has been a best selling book, Christmas Is Coming, for his publisher, Griffla, when it was translated into English by Hallberg Hallmundsson and illustrated by Tryggvi Magnússon.  Publishers aren't always willing to grant reprint rights, so for more information on Kötlum, Hallmundsson, and Magnússon go to Griffla's own webpage for Christmas Is Coming where you may order it or you can buy an e-book of the poem on Amazon.

The closest to a plot you receive in the poem we now have is that Gryla, their mother gives them "ogre milk", but Inspired by Iceland isn't afraid of the part that the Danish king rejected, saying


She is a dreadful character, described as part troll and part animal and the mother of 13 precocious boys (the Yule Lads). Grýla lives in the mountains with her third husband, her thirteen children and a black cat. Every Christmas, Grýla and her sons come down from the mountains: Grýla in search of naughty children to boil in her cauldron and the boys in search of mischief. She can only capture children who misbehave but those who repent must be released.

and the father with the very Icelandic name of Leppaludi, described in the poem as a "loathsome ilk" (rhymes with that ogre milk) and described by Inspired by Iceland as not evil but lazy.  He also seems to have no other part in the story, so he seems to be an optional character.

As you can see, the story has changed over time.  The Reykjavík Grapevine summarizes it

There's more to the story behind the change, which the Grapevine does a great job of showing how it included a clash with the Christmas cultures of Denmark and Germany.

To catch the introductory section from Kötlum's poem before the Yule Lads appear, go to Archive.org and in the search box enter http://notendur.centrum.is/sjbokband/joh.html/yulelads00.html, then choose the year 2007, finally clicking on December 22.   You can also see and hear the original Jóhannes úr Kötlum poem on YouTube, complete with the book's original illustrations (even though it took a graphic from what I posted above).  Another way is on Griffla's Facebook page, if you scroll down to December 11, 2017, it gives you a Yule lad per day, just as they traditionally appear.


The librarian in me also loves the Icelandic tradition of the Christmas Book Flood ensuring a book for everyone to enjoy.  You may be sure I followed that tradition even though I didn't know it was also Icelandic!  My family should expect it by now.

Something else I hope you will join me in gifting is a small donation to Wikipedia and to Archive.org as they are a great resource we'd hate to lose.

This next week I'll be telling as the Hired Girl for a Victorian Christmas program, also my Michigan Prohibition program, High Times in the Dry Times, so enjoy celebrating the holidays in whatever way works for you.
Posted by Lois Sprengnether Keel at 1:00 AM