Some Fowl Talk and a True Story


No less an important an American than Benjamin Franklin said the turkey would be a better national bird than the eagle.  I'm not going to take sides in that debate although the National Wild Turkey Federation would probably agree with it as their motto is "Conserve, Hunt, Share."  I'm not a hunter, but wild turkeys have certainly made a comeback in my semi-rural Springfield Township home in Oakland County, Michigan.  I mentioned this to my yoga teacher who talked about the 14 birds having taken over her farm.  She pointed out that, since the turkeys were so successfully reintroduced to our area, the pheasants have disappeared.  Hmmm.


Wikipedia notes the problem may be worse than that:

Turkeys have been known to be aggressive toward humans and pets in residential areas.[12] Wild turkeys have a social structure and pecking order and habituated turkeys may respond to humans and animals as they do to another turkey. Habituated turkeys may attempt to dominate or attack people that the birds view as subordinates.[13]
The town of Brookline, Massachusetts, recommends that citizens be aggressive toward the turkeys, take a step towards them, and not back down. Brookline officials have also recommended "making noise (clanging pots or other objects together); popping open an umbrella; shouting and waving your arms; squirting them with a hose; allowing your leashed dog to bark at them; and forcefully fending them off with a broom."[14]

Going on with that, while searching for an appropriate image to open today's story, I found the Country Farm Lifestyles article given in that caption link stated:


Raising turkeys is no different to keeping chickens, in fact, and in some ways turkeys are easier to raise. The one problem with turkeys is that they are big, ungainly birds with the larger breeds being so big that they cannot breed naturally. The males are so heavy that they find it difficult to mount the females successfully and the females often get scratched and injured after the many attempts.

There's a reason I include that information related to today's story.  Before I get to it, I ought to also include the Country Farm Lifestyles comment, "The good news is that there are smaller breeds of turkeys too, that have no trouble breeding, and If you want to keep turkeys on the farm as pets they live a long life. Many turkey breeds can live between 10 – 15 years."

I receive many newsletters from authors, including one from Ellen Byerrum.

I emailed Ellen back saying I made copies of the story she shared in it for each of the adults at our Thanksgiving table in case any discussions erupted in fights.  She emailed me that my idea made her night, considering it the highest compliment imaginable, and further saying "It was a most unusual story and I'm glad that people are enjoying it now"

(My own copy began with the heading "Turkeys: An Ergonomics Challenge", but the explanation I would have given orally is in the two paragraphs preceding the actual story.)

In the course of my interview, Ian went on to tell me other stories, for example about ergonomics for strippers and poker players. But those are tales for another day.
* * * * 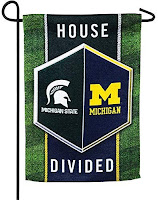 As it turned out, I never had the need to present the story.  The closest we came to a disagreement was one person, who shall not be named, but it wasn't my husband, saying this Saturday he'd prefer Ohio State beat the University of Michigan.  HMMPH!  My master's degree in library science came from U. of M., but at least I am willing to let Michigan State University do well if the "Maize and Blue" has a bad season.  Only once a year my husband and I root for different Michigan football teams.

Ms. Byerrum writes, among other things, cozy mysteries and I freely admit I'm not a fan of the trend where cozy mysteries feature food and even include recipes.  When I read I prefer not to have the story encourage me to eat.  That said, it's good that our Thanksgiving didn't require her book, Recipes for Disaster. 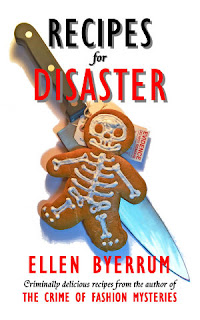 May the coming month of holidays avoid all Recipes for Disaster in your life with the possible exception of stories.