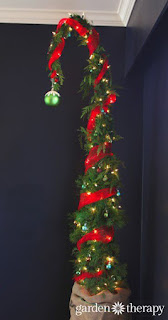 A lot of people have their Christmas tree up, but I'll bet that, no matter how much trouble it may have caused, it was nothing like today's story of "The Peterkins' Christmas Tree."

The illustration to the left comes from a website called Garden Therapy; Better Living Through Plants and the article there on "How to Make a Nine-Foot Grinch Tree" .  Of course that refers back to the Doctor Seuss story about How the Grinch Stole Christmas!  including that long tree which the Grinch's poor dog, Max, pulled up the mountain.  (The book's Wikipedia link gives some interesting inside views about it.)  If you go to the article on making one, you will see not only how to do it, but various versions of it.

My reason for muddying the storytelling waters here with a decidedly not Public Domain tale (even though it's become a major Christmas tradition in many formats) is the way it clearly touches the ceiling, a ceiling complete with the mitered corners put in place by a carpenter. 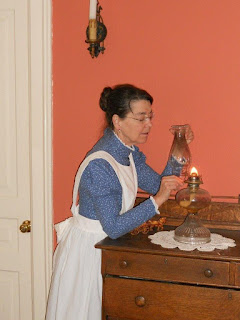 The Peterkins did precisely that, calling a carpenter to literally raise the roof -- or at least the ceiling -- to accommodate their tree.  Back on November 23rd I gave the first glimpse of the Peterkins with their story of "Why the Peterkins Had a Late Dinner."  I've never told that story, although maybe in the future I will.  Today's story, however, will once again be part of my Victorian Christmas program when I tell as the Hired Girl.  This year I've particularly had the program spotlight the botanical aspects of Christmas in my stories because I'm telling to a Garden Club, but this story is from 1880 and would have definitely been popular around the turn of the century when my Hired Girl persona would  look back on the way the holiday changed due to the influence of old Queen Victoria who barely made it into the 20th century by dying on January 22, 1901.

I gave a hint of the Peterkins with their own Wikipedia article which said:


The Peterkins were a large family who were extremely intelligent, but didn't have a lick of common sense among them. Whenever they were confronted with a problem that had a simple solution and a complex one, they unerringly went for the complex one--the simple one never occurred to them. They were usually rescued by their neighbor, the Lady from Philadelphia, known for her wisdom; which usually amounted to the plain, commonsense solution that had been staring them in the face and which any normal person would have seized on immediately.

I also gave various links about the author and her famous relatives and ancestor, but if you have the least bit of curiosity look up the New England Historical Society article about Lucretia Hale's inspiration!  It's somewhat like Doctor Seuss (Theodore Geisel) confessing about his creation of the Grinch.  I find it's always fun to know how an author or any kind of artist lets something lead to a creative work. 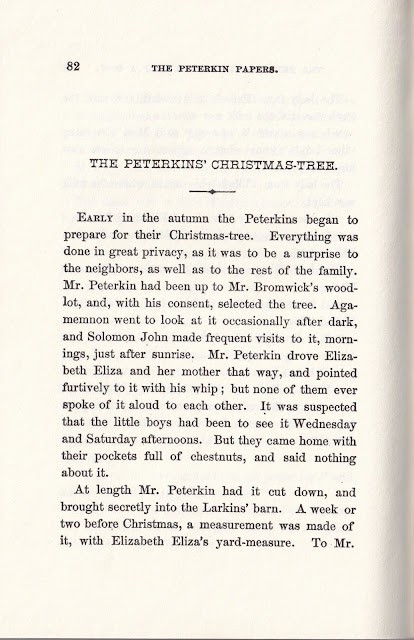 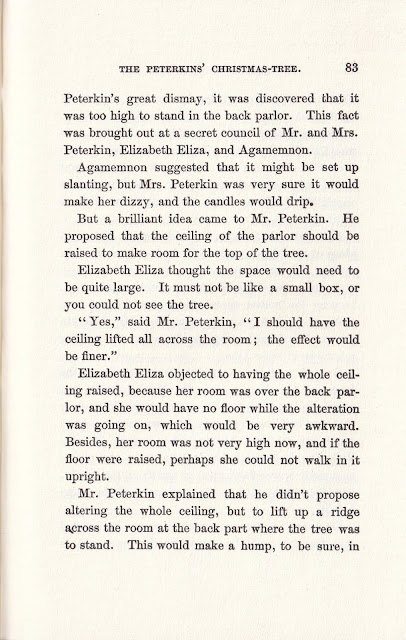 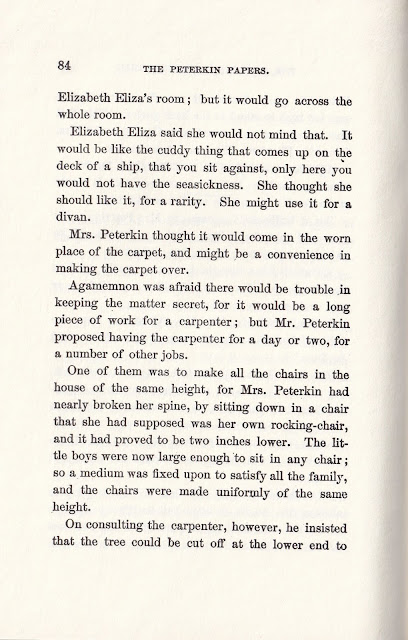 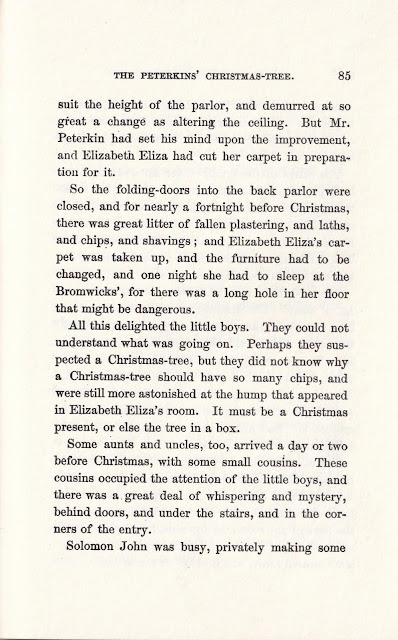 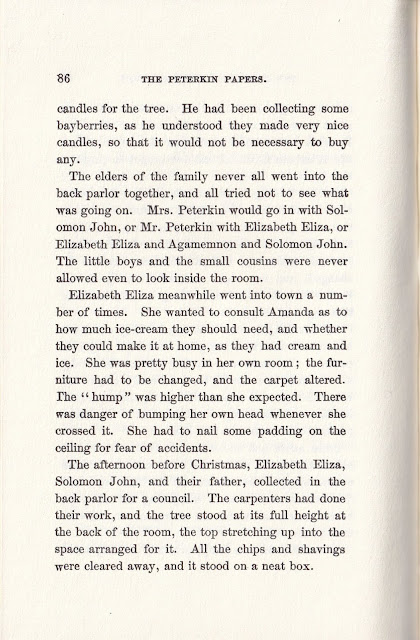 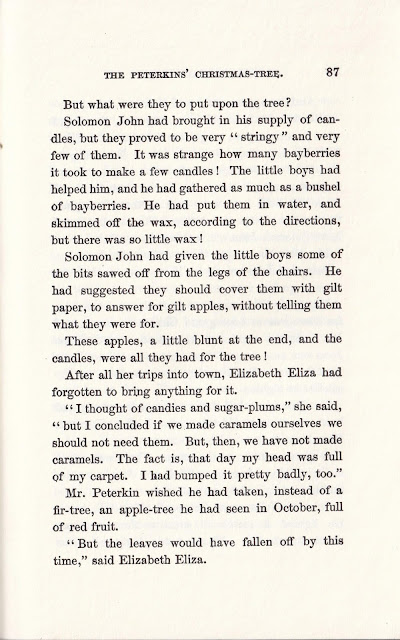 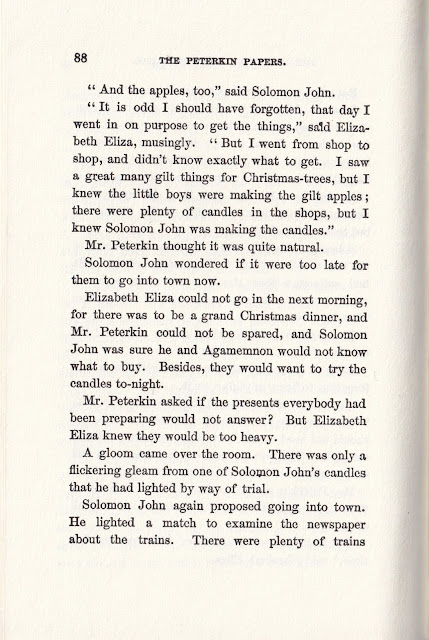 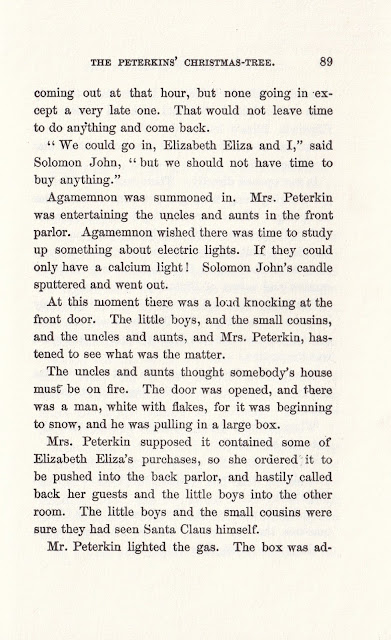 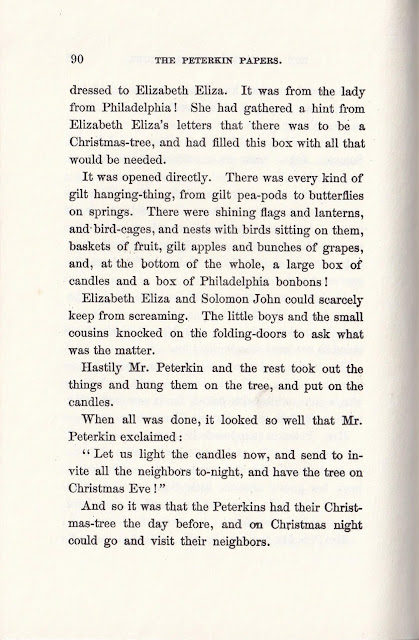 I believe strongly in keeping these stories in the Public Domain, but also recognize they need people remembering them.  In the 1960s the book was republished and a whole new audience discovered them.  I've not seen Elizabeth Spurr's The Peterkins' Christmas, as a picture book illustrated by Wendy Anderson Halperin, but the book information says Spurr adapted it.  I've also just discovered the 11/23 posting of "Why the Peterkins Had a Late Dinner" has been similarly adapted by Spurr and Halperin as a "companion book", The Peterkins' Thanksgiving.
**********************