This coming week is normally a time for celebrating, both Star Wars (May the Fourth...be with you) and Cinco de Mayo.  There's not a lot I do involving storytelling around Star Wars with the possibility of group story creation.  Cinco de Mayo, on the other hand, has many opportunities for storytelling. If you look into the 7 things you may not know about Cinco de Mayo, however, it officially celebrates a somewhat obscure time in Mexico's long history.  It is not Mexican Independence Day, that is September 16 and started in 1810 when Mexico declared its independence from Spain.  (Beyond the earlier hotlink of 7 quick facts about Cinco de Mayo, you may be interested in the entire presentation on it from history.com.) It's interesting that Cinco de Mayo is hardly celebrated in Mexico, but is a big fiesta in the United States.

It's a great way to celebrate Mexican culture -- which on this blog has a focus on Mexican folklore -- and who doesn't enjoy a reason for some celebration?!?

If you have the opportunity to tell a story, I found today's tale a lot of fun.  I've kept goats in my past and can just picture the title character in Philip D. Jordan's delightful look at a goat trying to be like other animals.  (I have another connection I'll give after the story.)  Dr. Jordan's tale comes from his book, The Burro Benedicto and other Folk Tales and Legends of Mexico which was published in 1960.  Those familiar with Public Domain may wonder why it is no longer under copyright.  Prior to the most recent U.S. Copyright law it was covered for 28 years and then was only covered further if renewed.  Jordan died in 1980 and his heirs, a wife and daughter, didn't renew his work.  That helps us with today's story for Keeping the Public in Public Domain.  Sadly only two libraries in Michigan still have this book.

The book is illustrated by Richard M. Powers.  The reason for his strange twisting path at the bottom of some of the pages will be revealed within the story.

You might introduce it by asking, "Have you ever tried unsuccessfully to do something it seems everybody else can do?"  Then give an example from your own life.  For example I've never figured out how to whistle using fingers in my mouth.  Instead I can make a fairly quiet whistle my mother used to call a "penny whistle."

Down in Mexico there once was a goat with an unusual problem. 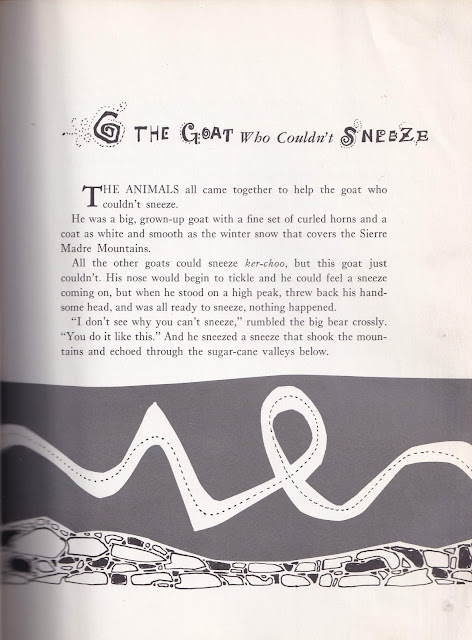 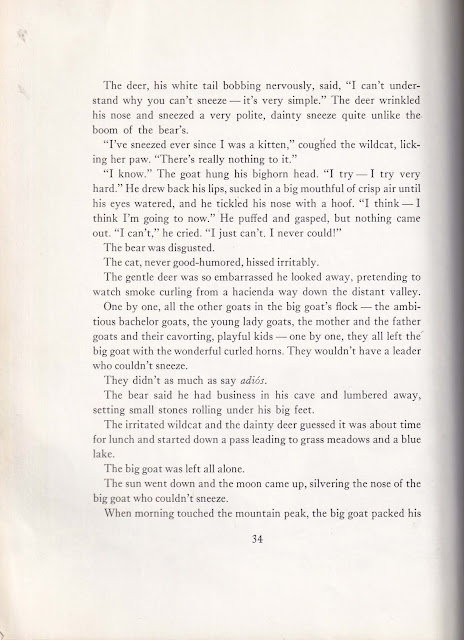 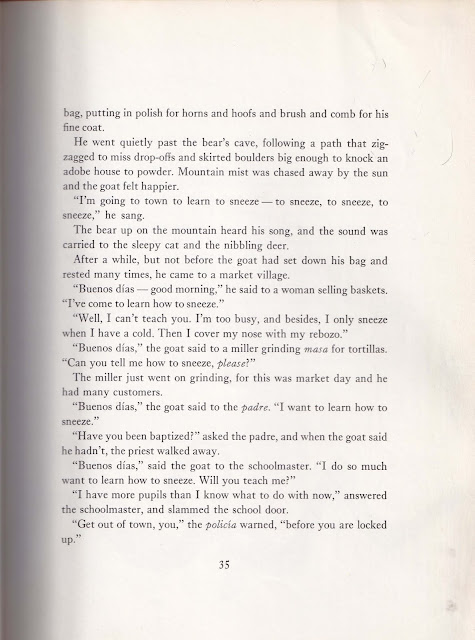 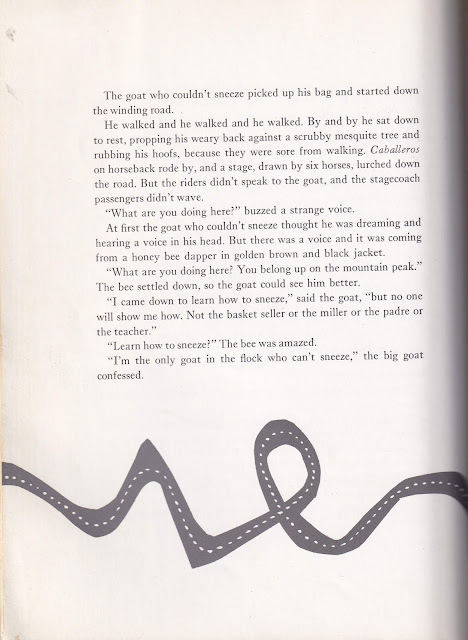 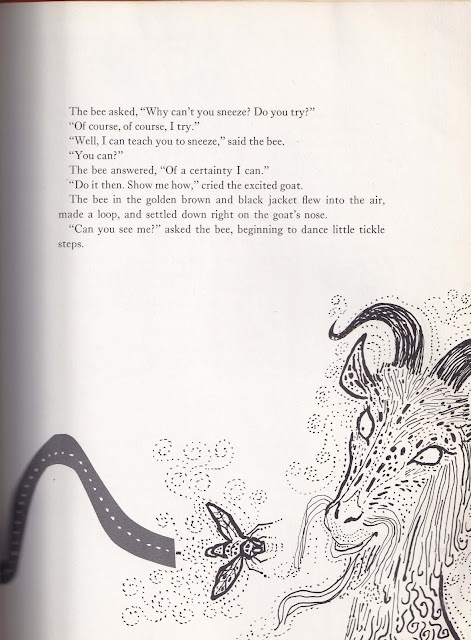 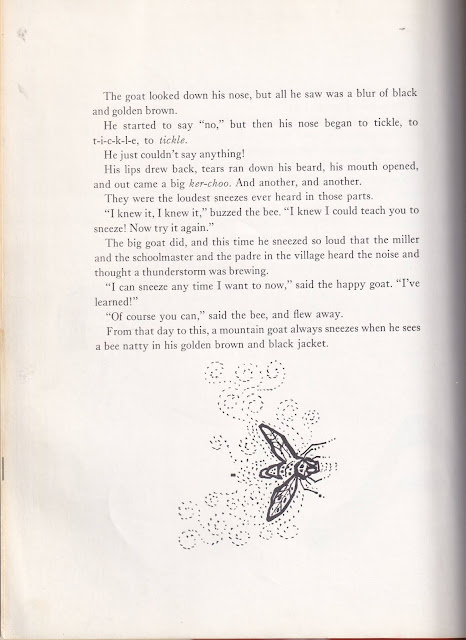 Of course you can ask your audience to do a big pretend sneeze with you to end the tale.  The story has many opportunities for audience participation.  For example you can assign some of the animals to specific people or parts of the audience, possibly making a particular motion or sound for their animal.  Other ways you can personalize it is by sprinkling the story with as many Spanish words you feel comfortable adding without weighing the story down. 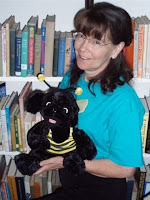 I mentioned earlier I have a further connection beyond my years with goats.  My late husband kept bees.  While I don't keep them, I always try to point out their importance to pollinating our agriculture.  (The continued use in the U.S. of neonicotinoid pesticides is endangering this useful insect.)  Fear of bees is a common phobia and all too often the reaction is actually to yellow jacket wasps, who also are yellow with black stripes.  I've covered this mix-up here many times and also on my website page about nature storytelling programs.  Bees die after stinging, so they only sting if threatened, while the more irritable yellow jacket can and will sting repeatedly.  I particularly love the Anishinaabe tale about how this came to be.  It's one of many stories here about  bees.
Earlier I gave only the briefest of coverage about today's author, Philip Dillon Jordan, but want to say a bit more about him beyond that dry obituary link.  Internet searching produces many scholarly articles by him as he was a University of Minnesota professor and continued writing in retirement up through the year he died.  Many of his works relate to how he viewed history and its relationship to folklore.  He was especially fond of folk music.  I need to hunt up his work on a topic related to the important Civil War era Hutchinson Family Singers, which I've discussed here in relation to my Civil War programs.  Information about Dr. Jordan himself, however, so far has only produced genealogical facts and photos.  In The Burro Benedicto and other Folk Tales and Legends of Mexico he mentions the stories came from when he lived in Mexico and wasn't working.  He loved to talk with people there and hear their stories.  Academic that he was, he gave his sources from the people who told him their stories.  Today's story came from a couple who were even more impossible to find on the internet:

You don't have to be a missionary to enjoy today's story or the fun of celebrating Cinco de Mayo.  After all, it's a great way to have fun while celebrating a culture.