This past week was Earth Day and also here in the mitten-shaped state of Michigan we had some hard freezes after above normal temperatures for most of the month.  Spring, especially the month of April can be so fickle.  Here in southeastern Michigan I've enjoyed the many blooming trees I see on my hiking in our area.  This has me watching to be sure the freezing hasn't hurt the blooms.  Since spring blooming is normally in a chilly time, I'm hopeful they are hardy.

This is especially true for our state because our cherries are a major part of both our agriculture and tourism.  Recently in 2012 those blossoms suffered record damage.  As the PBS News Hour noted it was A Sour Season for Michigan's Cherry Farmers and also included the blossoms on peaches and apples.  Prior to 2012 we had a slightly lesser, but similarly devastating, early warmth followed by cold in 2002.  The area affected was around Traverse City in the opposite northwestern corner of the state.  PBS's Science reporter, Saskia de Melker, noted that area

is considered by many an ideal place for growing fruit.  Located on the 45th parallel, halfway between the equator and the North Pole, the surrounding Great Lakes and rolling hills help create a temperate climate.

I also mentioned tourism and Traverse City has not just one, but two festivals related to all of this.  Blossom Day is scheduled for the third weekend in May followed by the Blessing of the Blossoms.  In July there's planned their eight-day National Cherry Festival, which is both one of their oldest festivals and one of the nation's largest.  That title is easily confused with the National Cherry Blossom Festival in Washington, D.C.

It's understandable that Traverse City separates its blossom celebration from the later big summer harvest festival.  Most people are familiar with Washington D.C.'s cherry trees.  They are part of a larger Wikipedia article on the Cherry Blossom, but this section on our capitol's trees is related to today's story:

Japan gave 3,020 cherry blossom trees as a gift to the United States in 1912 to celebrate the nations' growing friendship, replacing an earlier gift of 2,000 trees that had to be destroyed due to disease in 1910. These trees were planted in Sakura Park in Manhattan and lined the shore of the Tidal Basin and the roadway in East Potomac Park in Washington, D.C. The first two original trees were planted by first lady Helen Taft and Viscountess Chinda on the bank of the Tidal Basin. The gift was renewed with another 3,800 trees in 1965.[105][106] In Washington, D.C. the cherry blossom trees continue to be a popular tourist attraction (and the subject of the annual National Cherry Blossom Festival) when they reach full bloom in early spring.

Their festival this year was March 20 to April 11 as their area is further south with an earlier spring.

Mentioning the Japanese origin of those trees leads to today's story which anthologist Frances Jenkins Olcott just describes as a Japanese folktale with no mention of the source where she found it nor how she may have retold it.  Her Acknowledgements section simply says that Japanese tales (she mentions a few, but not this story) "are from Davis, Myths and Legends of Japan and Gordon Smith, Ancient Tales and Folk-Lore of Japan."  I don't have either, but would try to find them before telling this story.  At its end I want to give a storytelling note.

I might use a slightly different way to tell this story which has the Tale Type of "The Envious Neighbor."  It's a tale type often found in Asian folktales. 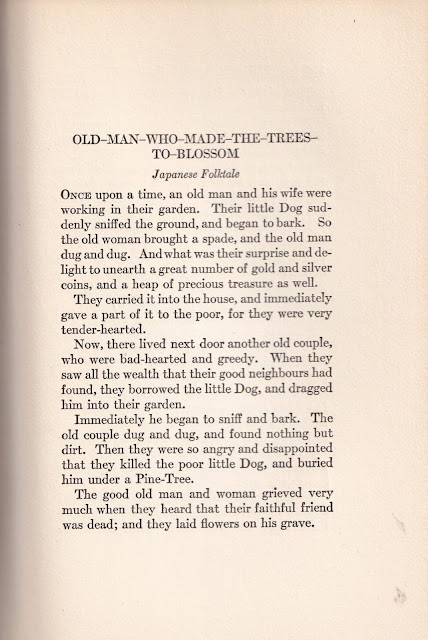 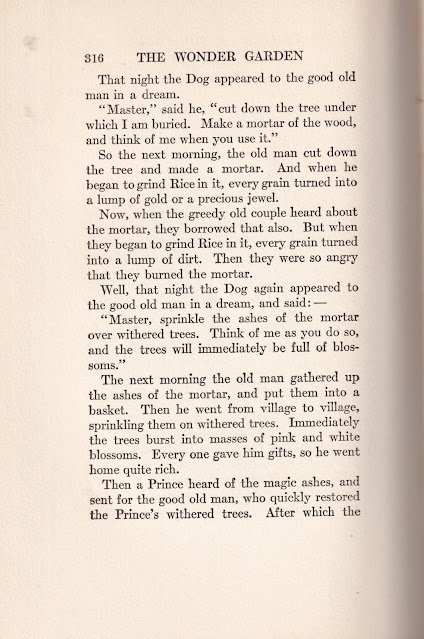 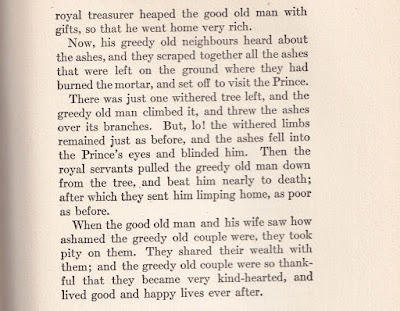 O.k. maybe Japanese folklore ends the story this way.  Maybe I'm also cynical about this "happily ever after" ending of the tale with kindness, not only on the part of the good old couple, since they have consistently been trusting, but also by their greedy old neighbors.  It seems the story should be stopped prior to the final paragraph.  Ask your audience what they think the ending should be.  At that point either congratulate them for sharing the view of the Japanese storytellers OR that their view differs from Japanese tradition.

There are more possibilities for using this to teach kindness, especially in view of recent news stories about Hate Crimes, including those directed at Asian Americans.  There's a reason stories throughout the ages have been used to teach values.

This is a lovely tale. Thanks for sharing! We have to update the Korean section of Fairytalez.com soon.