Charles Schulz had a book titled Summers Fly, Winters Walk, but in Michigan they sometimes slog and creep.  Is it any wonder that children's librarians are already looking ahead to plans for Summer Reading in 2023?  Many libraries, including here in Michigan, use the Collaborative Summer Library Program,  which next year has the theme of "All Together Now" focusing on Kindness, Friendship, and Unity.  If that focus can lead young readers to create a kinder, unified world and foster friendship, it's a wonderful goal. 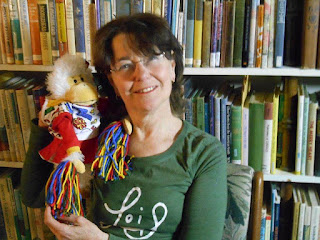 All those years of being a children's librarian has me already thinking ahead, but also thinking back five years ago to 2017.  At that time I brought out my cheerleading puppet, Priscilla Gorilla in a program when the theme was Build a Better World.  I'm confident she can lead cheers related to Kindness, Friendship and Unity.  What I'm not certain about is if the rest of that program takes the right positive spin.  That program was particularly aimed at fighting bullying.  Schools at the time were seeking programs on that topic. In addition to Priscilla I used building blocks to involve audience members in choosing the topics and stories they chose.

You can't see the titles of those stories here, but if you look at the long list of stories on the block labeled "Courage" and the few listed on "Patience" you can see the way the program was structured. 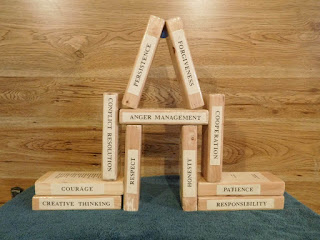 In case it's hard to read those topics or blocks: I looked at Creative Thinking; Courage; Conflict Resolution; Respect; Anger Management; Persistence; Forgiveness; Honesty; Cooperation; Patience; and Responsibility.  Some stories fit more than one topic.

I've found the following story in many locations on the internet, but am unable to track it down to its source.  It certainly fits Friendship and Kindness.  I originally applied it to Anger Management and Respect.

Writing on sand or rock Two friends were walking through the desert. At a specific point of the journey, they had an argument, and one friend slapped the other one in the face. The one, who got slapped, was hurt, but without anything to say, he wrote in the sand: "TODAY, MY BEST FRIEND SLAPPED ME IN THE FACE." They kept on walking, until they found an oasis, where they decided to take a bath. The one who got slapped and hurt started drowning, and the other friend saved him. When he recovered from the fright, he wrote on a stone: "TODAY MY BEST FRIEND SAVED MY LIFE." The friend who saved and slapped his best friend, asked him, "Why, after I hurt you, you wrote in the sand, and now you write on a stone?" The other friend, smiling, replied: "When a friend hurts us, we should write it down in the sand, where the winds of forgiveness get in charge of erasing it away, and when something great happens, we should engrave it in the stone of the memory of the heart, where no wind can erase it" (Anger Management, Respect)

By the way, if it helps, here are the three blogs about the program I made back in 2017:

Your reactions to this would be greatly appreciated.   (You may email me -- it's at the top of this blog, or on my Facebook page, or here.)