Oak Hill Cemetery this weekend or "Cemetery Walks Are Anything But DEAD!"

This month and next month are the perfect time to "haunt" cemeteries.  For September, this Sunday Oak Hill is where I will be. 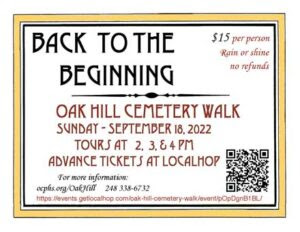 This weekend's walk is the 7th year for the Friends of Oak Hill Cemetery and goes back to the beginning of Pontiac's historic cemetery.

Oak Hill Cemetery is located at 216 University Drive in Pontiac, Michigan. It is considered to be one of the oldest cemeteries in Oakland County, and was added to the National Register of Historic Places in 1989. Oak Hill spans University through the middle and Paddock to the east. The easiest way to access the main cemetery from the west: Take M-59 east to Paddock Street and turn left, then left again at University. From the east, simply take M-59 to University and there you are.

Oak Hill was founded by the Pontiac Company in 1818, and the town’s first burying grounds were located on Stephen Mack’s land on the ridge east of the Clinton river (about where City Hall stands today), and in a small graveyard on the corner of Saginaw and Huron Streets. As the town expanded, a new burying ground was needed and in 1822 land was set aside by the Pontiac Company for a cemetery, church and parsonage east and north of town. In 1839 the cemetery was platted and burials began there in 1841, beginning with relocating the graves from the earlier burying grounds. 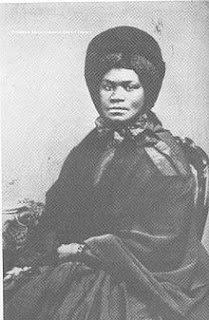 One of the gravesites we will visit is that of Elizabeth Denison Forth. In 1825, "Lisette", the nickname she preferred, was a freed slave and the first black woman to own land in Michigan, purchasing 4 lots in Pontiac. She leased these lots to her brother, Scipio Forth, selling them in 1836 or 1837 to the village of Pontiac. Portions of this land became part of Oak Hill Cemetery. A historical marker stands on what was Ms. Forth’s land, commemorating her ownership of the property.

If her portrait looks familiar it's because a 50- by 60-foot version is on the side of the Riker Building's parking structure in downtown Pontiac, seen while traveling south on Woodward.. The Waterford artist of this mural, Zach Curtis, wanted to illustrate Pontiac's colorful history and memorialize her significance to Michigan. Lisette also is remembered for willing a portion of her estate to build St. James Episcopal Church on Grosse Ile.

There's a certain appropriateness in her overlooking Woodward as Wikipedia says:

Judge Augustus B. Woodward ruled that the Michigan Territory had no obligation to return enslaved people who had been freed by establishing residence in Canada to slavery. Following this legal precedent, Lisette and her brother crossed into Canada shortly afterward to establish residency and gain their freedom.

Covenant’s area of responsibility to the cemetery is limited by its contract. This contracted amount doesn’t support privately owned structures like mausoleums, monuments, headstones, or other structures. Aside from the Petrie Mausoleum, any endowed funds have been depleted. Maintenance and repair to monuments, mausoleums and other certain cemetery assets falls to the local community. This aspect of maintaining Oak Hill is most often provided by the volunteer group unofficially called the Friends of Oak Hill Cemetery.

The walk is dedicated to the continual restoration of mausoleums along with beautifying the grounds. They have also accomplished the restoration of the original historic fence, and raised money for headstones including the memorial for the residents who died at Pontiac State Hospital in section 11 of the cemetery. This page on the Oakland History Center's website (you may know them by the former name of Oakland County Pioneer and Historical Center) shows some past year posters and then below that exciting photos of cemetery projects.  The walk donations are directly used to support new projects and maintain and repair monuments and gravestones. Even at that the annual history walk only raises a small amount each year, but it is not nearly enough to do larger projects. Your financial help saves this vulnerable historic cemetery. A walking tour booklet created in 1976 is available here.  While it doesn't have the lively reenactors throughout the cemetery, you may want it to visit the many other memorable graves throughout the cemetery, some of which have been featured over the past seven years.