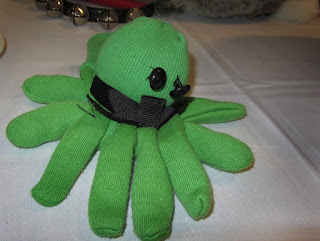 I understand spiders creep a lot of people out.  One of my daughters is definitely an arachniphobe.  At the same time I know many wonderful stories about Anansi the spider and love using my easily made puppet.  Ages ago I lost the first one, but knew I could easily replace it.  Take a pair of cloth garden gloves and cut off three fingers on one glove.  Sew the extra fingers in gaps between the thumb and fingers for one of the cut fingers and sew the other two just past the little finger.  Stuff them.  It's up to you if it's easier to stuff them before or after attaching.  The head is a ball that fits in the top of the glove hand.  Add a ribbon for a necktie and eyes.  Yes, one of the buttons on my Anansi is loose.  At the moment it gives him "personality", but may eventually need further work.


I thought of Anansi because it's almost time for spiders to be coming in to houses and trying to find ways to get through the winter.  Here are some facts about why you might be wise to carefully permit it:  "4 reasons why we should learn to live with spiders."  That first one, especially about eating mosquitoes, has always made me treat spiders with respect.  There are also many spider stories in Native American folklore from Grandmother Spider among the Southwestern nations to what is often a  trickster, Iktomi, for the Plains people.  Wikipedia goes international with its Cultural depictions of spiders, which takes you all over the world.  The African section mentions the name varies, and is sometimes Ananse, or even Aunt Nancy when those tales were brought by African slaves over to this hemisphere.

I have spider tales from all over, including when I've worked in Jamaica, but most are not in Public Domain.  Does that mean I can't tell them?  Dunberidiculous!  Folk tales are meant to travel farther than a spider swinging on a web's strand.  We can re-tell them in our own way and also send people to the many books where others have shared their stories, art, and living with spiders.
Posted by Lois Sprengnether Keel at 1:00 AM