How appropriate it is this week I again get to bring to life the story of World War I's the "Hello Girls" and this area's Oleda Joure Christides.  This Sunday, here in the United States November 11 is Veterans Day and throughout the British Commonwealth it's Remembrance Day.  Oleda's daughter, Helen, will be at Chaumont, General Pershing's headquarters in France, where her mother served.  France is one of many locations where it's called Armistice Day or, just informally, Poppy Day.

This picture is from an Australian article about their memorial, with the poppies scattered to replicate how they grow and the soldiers fell.
Not far from here in Guelph, Ontario, I've had the privilege of joining with their storytelling group many years ago for Remembrance Day.  Back then I didn't realize the poet who wrote "In Flanders Fields", talking about the poppies and the dead, was Canadian physician, Lieutenant-Colonel John McCrae, who was born in Guelph and only a little later died and was buried in France.
Those poppies grew on the old battlefields and new cemeteries because the ground was so disturbed and the lime content of the fields made it one of the few plants to grow. There's a British site about the war, which is still referred to as The Great War.  The site has a page specifically about the poppy and Remembrance Day.

Aside from doing a program this past week, I began thinking about it when I saw this on the page of a friend and former co-worker's Facebook page. 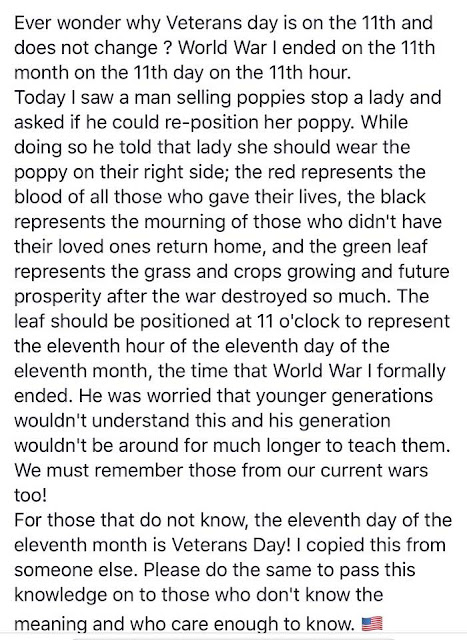 I knew about the origin of the saying "the eleventh hour", but I'd never heard about the positioning of the flower and it sent me looking further.  I still didn't find the origin of the Facebook article, but a site called That's Nonsense.com, which claims to explore internet nonsense, did an article on it.  By and large they didn't really debunk it.  I liked their concluding its symbolism is up to you as long as you are respectful and they turned to the Royal British Legion's conclusion:


I love the section in my program when I tell how it was called out "La guerre ç'est finie!"  Of course the negotiations were just the beginning as Oleda saw both the final year of getting the soldiers home and the 60 year fight of the Hello Girls to gain veterans recognition.  She was one of the few to make it all the way through that part of Women's History. The decisions made in those negotiations, unfortunately, are usually pointed to causing World War II.

As of this point I am booked to bring the program through March of 2019, but hope to continue to keep the story alive beyond 2019 as it is indeed Women's History, military history, and an important stage in world history.