I confess to mixed feelings about today's posting.  It's great for people who can memorize something like The Bear Story as James Whitcomb Riley wrote it, with or without dialect.  I do think the YouTube version I posted with the article about the original poem back on November 17 shows listening to it is probably easier than reading it.  Personally I prefer taking the story, which is an excellent example of a tall tale and re-telling it (as opposed to a memorized version) with a hint of the style of Riley's original.  For example, my translation today omits saying "purt' nigh" and substitutes "pretty near", but I think the listener can follow it.  That phrase also gives a sense of the teller, in this case the Little Boy.  I also find myself feeling sorry for the two bears.  They are a real threat to humans in their territory, but the Little Boy sets out specifically to kill them.

Last week I told so much about the poem and Riley that I only linked to the original.  For your convenience I'm giving it right after my "translation."  I also found so many great bear picture to start the story, but will stop once they have set the stage for the action which clearly keeps the Little Boy thinking his way through his story as he is telling it.

Bear Story (translated from the dialect) 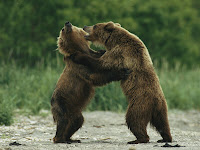 Why once there was a Little Boy went out
In the woods to shoot a Bear. So, he went out
Away in the great-big woods – he did. – And he
Was going along – and going along, you know,
And pretty soon he heard something go “Wooh!”

It's that way – “Woo-ooh!” And he was scared,
He was. And so he ran and climbed a tree –
A great-big tree, he did, a sycamore tree.
And then he heard it again: and he looked around,
And it was a Bear! – a great big sure enough Bear!
No: it was two Bears, it was – two great-big Bears –
One of them was – this one's a great-big Bear. –
But they both went “Wooh!” – And here they came

To climb the tree and get the Little Boy
And eat him up!

And then the Little Boy

He was scared worse than ever! And here came
The great-big Bear climbing the tree to get
The Little Boy and eat him up – Oh, no! –
It wasn't the Big Bear that climbed the tree –
It was the Little Bear. So here he came

The Little Boy he just pulled up his gun
And shot the Bear, he did, and killed him dead!

And then the Bear he fell clean on down out of
The tree – way clean to the ground, he did –
Spling-splung! He fell plumb down, and killed him, too!
And lit right beside where the Big Bear's at.

And then the Big Bear was awfully mad, you bet! –

He – he was the Little Bear's Papa. – And so here
He came to climb the big old tree and get

Coming, he was worse scared, he was,
Than any time! And so he thought he'd climb
Up higher – way up higher in the tree
Than the old Bear could climb, you know. – But he –
He can't climb higher than old Bears can climb, –

Because Bears can climb up higher in the trees
Than any little Boys in all the Wo-r-r-ld!

And so here came the great-big-Bear, he did, – 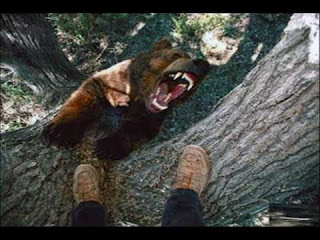 The old Bear – closer to him all the time! –
And then – first thing you know, when the old Big Bear
Was right close to him – then the Little Boy
Just jabbed his gun right in the old Bear's mouth
And shot and killed him dead! – No; I forgot, –
He didn't shoot the great-big Bear at all –
Because there was no load in the gun, you know –
Because when he shot the Little Bear, why, then
No load was anymore in the gun!

But the Little Boy climbed higher up, he did –
He climbed lots higher – and on up higher – and higher
And higher – until he just can't climb any higher,

Because then the limbs were all so little, away
Up in the teeny-weeny tip-top of
The tree, they'd break down with him if he didn't
he Be careful! So he stopped and thought: And then

He looked around – And here came the old Bear!

And so the Little Boy made his mind
He's got to just get out of there some way! –

Because here came the old Bear! – so close, his breath's
Pretty near so he could feel how hot it was
Against his bare feet – just like old “Ring's” breath
When he's been out hunting and is all tired.
So when the old Bear's so close – the Little Boy
Just gave a great-big jump for another tree –

And the old Bear began to snuff and sniff around,
And sniff and snuff around – so he could find
Out where the Little Boy was hidden. – And then – then –
Oh, yes! – Why, pretty soon the old Bear climbed

Away out on a big limb – a great-long limb, –
And then the Little Boy climbed out of the hole
And took his ax and chopped the limb off! . . . Then
The old Bear fell k-splunge! clean to the ground

And busted and killed himself plumb dead, he did!

And then the Little Boy he got his gun
And commenced climbing down the tree again –
No! – no, he didn't get his gun – because when
The Bear fell, then the gun fell, too – And broke
It all to pieces, too! – And the nicest gun –

His Pa just bought it! – And the Little Boy
Just cried, he did; and went on climbing down
The tree – and climbing down – and climbing down! –
And sir! When he was pretty near down, – why, then
The old Bear he jumped up again – and he
Wasn't dead at all – just pretending that way,

So he could get the Little Boy and eat
Him up! But the Little Boy, he was too smart
To climb clean down the tree. – And the old Bear
He can't climb up the tree any more – because when
He fell, he broke one of his – he broke all
His legs! – and then he couldn't climb! But he

Just won't go away and let the Little Boy
Come down out of the tree. And the old Bear-Story
Just growled around there, he did – just growls and went
”Wooh! – woo-ooh!” all the time! And the Little Boy

He had to stay up in the tree – all night –
And without any supper either! – Only there

Were apples on the tree! – And the Little Boy
Ate apples – just all night – and cried – and cried!
Then when it was morning the old Bear went “Wooh!”
Again, and tried to climb up in the tree
And get the Little Boy. – But he couldn't
Climb to save his soul, he couldn't! – And oh! he was mad! –
He just tore up the ground! And went “Woo-ooh!”
And – Oh, yes! – pretty soon, when morning came
All light – so you can see, you know, – why, then
The old Bear found the Little Boy's gun, you know,
That's on the ground. – (And it isn't broken at all –
I just said that!) And so the old Bear thought
He'd take the gun and shoot the Little Boy: –
But Bears they don't know much about shooting guns;
So when he went to shoot the Little Boy,
The old Bear got the other end of the gun
Against his shoulder, instead of the other end –
So when he tried to shoot the Little Boy,
It shot the Bear, it did – and killed him dead!
And then the Little Boy climbed down the tree
And chopped his old wooly head off: – Yes, and kille
The other Bear again, he did – and killed
Both the bears, he did – and took them home
And cooked them, too, and ate them!

By the way, Riley also wrote “A Bear Family” in his TheBook of Joyous Children which I might post here sometime, but that link lets you find it in Project Gutenberg's many Public Domain books.  I hope you go there often and also donate to their wonderful resource for Keeping The Public in Public Domain.
***********************