Jacobs - The Hobyahs continued - Keeping the Public in Public Domain 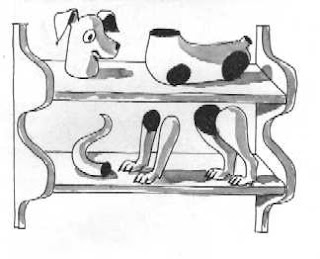 There is a certain degree of follow-up needed on The Hobyahs.

I was a bit rushed on posting June Barnes-Rowley and Marilyn Kinsella's information about the Hobyahs.

Marilyn was a bit late in responding and said what I posted from her website deserves a bit more credit to January Kiefer as they used to perform it in tandem for several years.

As Marilyn described the story:
June, of necessity, had to be contacted too close to my posting it.  She responded:


A fantastic blog, Lois. You’ve broadened my knowledge of *The Hobyahs *and you’ve reminded me of one of the things I loved most about the traditional tales – the stories behind/around the tales. Papa Joe does a great rendition of *Hobyahs*. I’m honoured that you have included my videoed telling of the story – and even enhanced it. :)

As for different versions of the story, I think the version in the Victorian Second Grade Reader is excellent for young children. They identify with Little Dog Dingo who, like them, is vulnerable in the power of adults and unable to articulate why he is behaving the way he is. The animal character provides just enough distance whereas if the character were a child the identification would be much stronger, and therefore extremely unsettling.

Because the children have empathy for Little Dog Dingo, they feel the suspense of wondering whether he will survive. They share his frustration at not being able to make himself understood. They rejoice when he is finally taken seriously by his significant adult and, as a result, saves the day. At the end of the story, when the terror is over, the child’s world is restored to harmony – Little Dog Dingo is put back together and the Hobyahs are no more.

I believe Bruno Bettleheim said something along the lines of a scary story being a safe place for children to work through their fears. I think*Hobyahs* is a good example of that.

Of course, young children in the second grade in Australia ‘back in the day’ were tough kids and most had a connection to the land where life is brutal so, although they would be concerned for Little Dog Dingo, they wouldn’t necessarily fall over in a swoon on reading the story as today’s shielded children might.

As for the origins of the story, I’m inclined to think they are more likely to be Scottish than Australian. For one thing, when Jacobs was working on *More English Fairy Tales*, he was living in the United Kingdom.

Also, when the Victorian Readers were compiled Australia was still joined at the hip to Britain and, although there was some concern to have stories that reflected Australia, most of the stories provided to schoolchildren were sourced from the UK. I think *The Hobyahs* is unattributed in the Victorian Reader but it is possible it was sourced from Jacobs’ publication then reworked.

And as for ‘swag of yarns’, I’m afraid it is no more. Yes, priorities and time. But it is nice to know it is missed.

Nice talkin' to ya, Lois.

From time to time I mention the email list, Storytell, hosted by the National Storytelling Network.  Of course spooky stories and their options  are a popular topic in October, so I did a "heads up" about this blog discussing The Hobyahs.  Two storytellers discussed their experiences with it.  (Blogger took my pasting their comments plus those of June and Marilyn and made some strange formatting.  My apologies.)

When I tell "Hobyahs" I use "exaggerated" facial reactions as I describe how the Hobyahs look.

I do the same thing every time I say, "Poor Little Dog Turpy".

I end the story with "The hunter took the little girl to the remains of the house where she used to live. They gathered Little Dog Turpy's body parts and took them to a veterinarian and, because I like dogs, the vet sewed Little Dog Turpy back together as good as new."

While discussing it a bit further, she told me about a workshop she attended ages ago on telling spooky stories that advised, for young children, letting out a giggle and a smile to let the children know it really wasn't as spooky as it might seem.

Additionally fellow Missourian, (but she stayed, while I moved to Michigan), Mary Garrett said on Storytell: