A Month of Gratitude 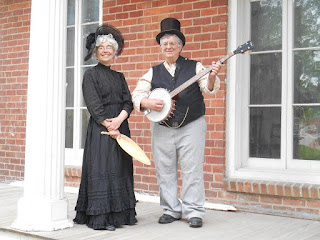 For November I need to work ahead a bit.  I have my usual wonderful assortment of work commitments, but also expect to spend some time in Chicago while my husband, Tom, stays home keeping the rest of things going.  A while back I asked my accountant if I should make him an official employee.  NO WAY!,  she said emphatically.  It's not worth the paperwork and other problems.  So my ever-loving Roadie often, but not always, comes along to my gigs, transporting me and other equipment and sometimes playing his banjo.

Tom loves his banjo and also loves adding it to some of my programs.  Something else about it that he loves is how he only started playing after we got married.  He guesses it was maybe 2006.  It's his first and only playing experience.  Back in his youth he loved folk music, especially the 5-string banjo playing by Dave Guard of the Kingston Trio.  When people say they wish they played an instrument, he points out how he's a Late Bloomer and they can bloom, too.  In my programs I pick on the poor banjo player, but Tom's playing has often been praised by my audiences.  He's a benefit not written into my contracts.  (He's a benefit in oh so many ways, but this blog is about storytelling.)

November is the month in the U.S. where we officially celebrate Thanksgiving.  In the past I posted two 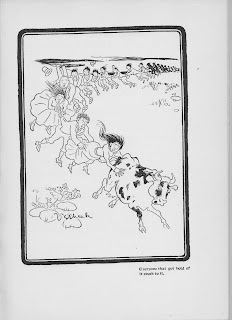 enjoyable Public Domain tales in recognition of it.  The first one, The Plaisham, is also good for Audience Participation.  It occurs to me that the word's pronunciation might be something you want to know.  The story makes it clear there is no such thing as a plaisham, so it's not surprising no pronunciation is found.  Long ago I learned there are differences in Irish dialects which may let you know the speaker's region.  They're mainly in three regions: Munster (Cork and Kerry), Connemara and Ulster (Donegal), but I appreciate An Gael, the online Irish language magazine's offering of a system and their saying:
if you've memorized this system and somebody says to you 'Your pronunciation is wrong, it should be said this way...,' don't worry about it.  Most likely they just haven't heard another dialect's way of pronouncing it...
That came from their section on How To Pronounce Irish for Beginners.  From there you will learn to silence the "s" as the "h" is aspirated.  As for the "ai" you are told to "take your choice" of what I would call ah, long a, or long i.  I'm grateful for the internet's ability to put such answers right on my computer.  As for the husband in the story, he's got his own reasons to be grateful. 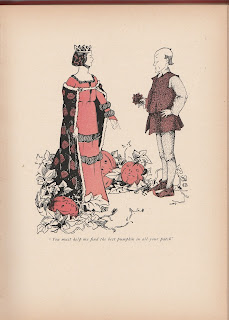 Talking about the second story, Madge Bigham's Little Wee Pumpkin's Thanksgiving,  I said: Don't let the overly cute "Wee" in the title turn you off.  It's a good story that might benefit from updating the name of the pumpkin in the title to something a bit less likely to draw unintended snickers.  That's what I said two years ago, but I'm now going to reverse myself.  This year's pumpkin crop has produced much smaller than normal pumpkins.  I'm even hearing canned pumpkin filling may have a shortage because it requires bigger pumpkins.  Aren't you grateful for the warning?  I'm grateful that it gives me a reason to produce a tiny pumpkin and explain the Celtic word "wee."

The queen in that illustration is saying "You must help me find the best pumpkin in all your patch."  While this might not be the best year for pumpkins, what the queen does with that Little Wee Pumpkin is indeed a heart-warming idea ending with a sick child's gratitude.

I'll be posting stories related to Thanksgiving or at least gratitude this month.  It would be a poor unhappy person indeed who couldn't find at least one reason for gratitude.  You don't have to wait until next week for something to stir up your gratitude.  There are always tons of self-help books.  A favorite author is Regina Brett, who also is available online in many ways to give you a variety of ways to read her.
She's a columnist for the Cleveland Plain Dealer and they post her weekly articles in a blog.  That's more current than her website's posting of her articles.  (Ah, yes, website's are always Under Construction because there's always more to do to update them.  I speak from personal experience and consider sites with the Under Construction sign a mark of being a newbie in website maintenance.)  Her site is a great starting point, though, to find out more about this award-winning, funny woman who was unlikely to become a writer, especially not of self-help books.  Her articles are regularly passed around the internet, including her most requested column which she updated in 2008 to Regina Brett's 45 life lessons and 5 to grow on.  Her first book's title came from the start of all this in a column her editor had to be convinced to publish, only to find a huge favorable response wanting even more.  She's been a Pulitzer Prize finalist more than once.  Don't think she's Pollyanna unaware of life's problems.  Among her many "life lessons", she's a cancer survivor and does a lot for people facing that diagnosis.  It's not the only reason I say she was unlikely to become a writer of self-help books, but I'll let you discover more.
Posted by Lois Sprengnether Keel at 1:00 AM