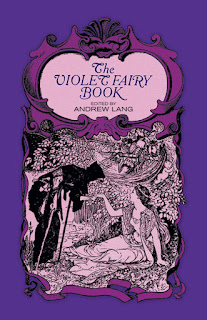 At last it's time to bring this story to a close!  I promised I would give 2 versions for you to consider.  Today will be from the version by J. G. Hornstein.  This is the version I've been using all along, BUT I will follow next week with the more typical ending.  The easiest one to use is from Andrew Lang's Violet Fairy Book.  That book dates back to 1901 and is readily available all over the internet and in print, with Dover Publications long offering an inexpensive paper edition.

Dover is worth a bit of further comment here as they, too, kept many Public Domain works alive.  Good old Wikipedia even has an article to give you insight into Dover's history.  Like most publishers, recent times has led to changing ownership.  Founder Hayward Cirker, was called The Last Paperback Revolutionary in the New York Times article by Tom Reiss.  You can feel the love Reiss, too, had for Dover and his dismay over changes since Cirker's death.  Dover is now run by the Fortune 500 company, RR Donnelley.

I suggest, if you, too, have any interest in Dover, look at least into the Wikipedia and New York Times articles hotlinked in the previous paragraph.  It's not necessary, however, for your enjoyment of today's version or the alternate version I'll post next week after the Hornstein edition.  What is necessary is my explanation of the different way other versions translated Hauff and why Hornstein completely ignored a literal translation.  Next week we will have the more literal conclusion to the story Lang calls "The History of Dwarf Long Nose."  Because Lang has the traditional translation of Hauff, it's worth knowing and considering which way you prefer the story.  As you may guess, I like a lot of what Hornstein did with the story, but it's not what Hauff originally wrote.  Next week's translation of the ending aligns with other translations.  The joys of not reading a story in its original language!  We wind up with two ways of telling the story. 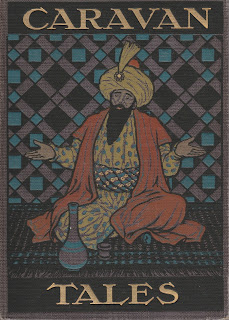 I've been unable to learn anything about the mysterious J.G. Hornstein except what he wrote in Caravan Tales' preface "To Donald."  Hornstein freely admits on the book's title page the stories are "Freely adapted and retold", but the preface gives clues to why these versions are so different.  Hornstein told the stories to Donald on long walks.  He said his business was "to read them over and over again with a whole generation of schoolboys", so I presume Hornstein was a teacher of German.  He regretted "such good stories should be practically buried away in forbidding class-books and remain unknown".  Donald's delight in the stories led him to attempt translation, but "My stories on paper were not the stories you liked to hear on our rambles; there was something wrong with them -- they were insipid and unreal."  Hornstein then "put away that little blue book with its crowded pages of quaint and unintelligible characters which puzzled you so much, and wrote the words down as if they came out of my own head."  He further admits "It was a bold thing to do; I sometimes felt it was almost a wicked thing, and there may be many who will blame me harshly for doing it, but I must not mind the worst that can be said of me, for it is the approval my undertaking met with from you which makes me hope that, although the grave and the learned may be against me, I shall have all you young and happy children to stand up and fight for me."  He also adds his reward is "to spread the fame of Wilhelm Hauff, to whose genius this book owes its existence."  That certainly fits with the goals involved in Keeping the Public in Public Domain.

If you want to see the book, including its preface, which goes on to talk about the brief life of Hauff who "died just eleven days before reaching his twenty-fifth birthday", the digitized copy from Cornell University can be found online at Hathi Trust Digital Library.

Trust me, for a bibliomaniac like myself, the book, however battered, has gilding on it cover and charm missed digitally.

Enough of the story behind the story.  Let's jump into where we were about to bring this to a conclusion.  So many names have appeared we may yet find them "quaint and unintelligible characters which puzzled you so much."  Added to that we finally are given the name of Aghab to the "Wonder Child" even though it never appears until now.  I love books that start with a list when there are many characters.  This is my list for those mentioned in the concluding section.

And so we begin to tie together the threads forming this "Oriental Rug" brought in Hauff's Caravan Tales. 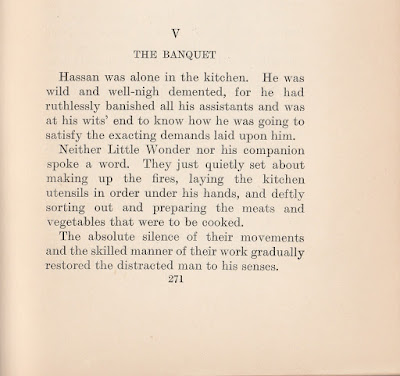 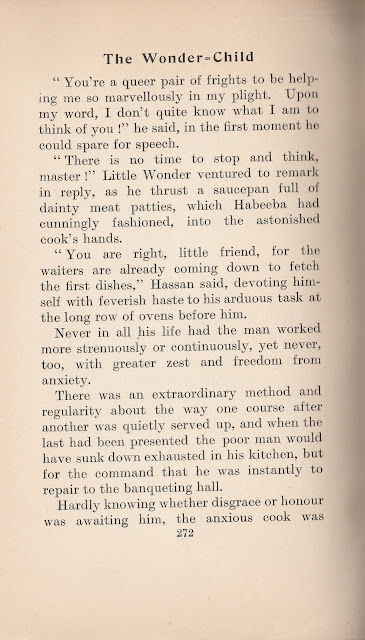 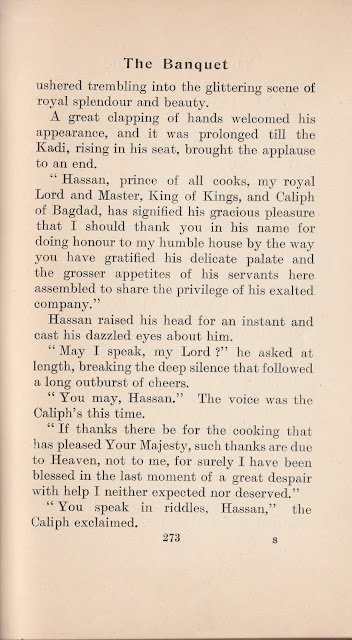 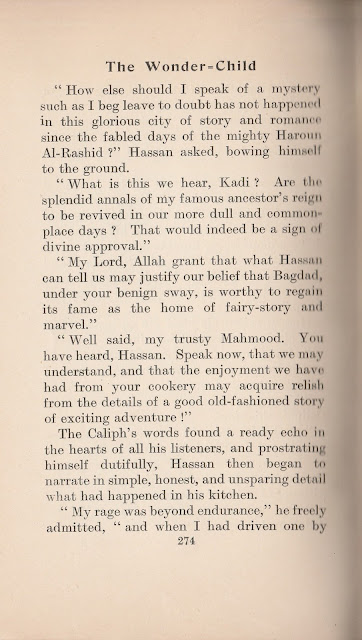 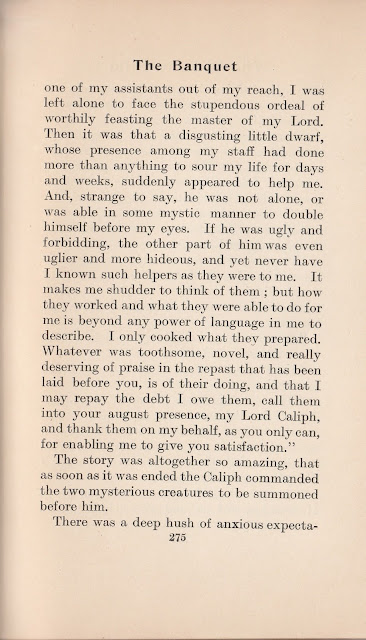 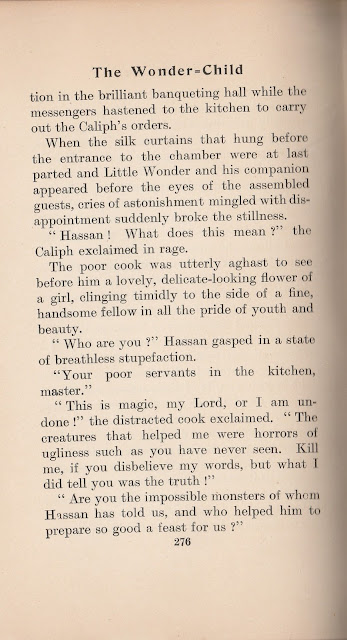 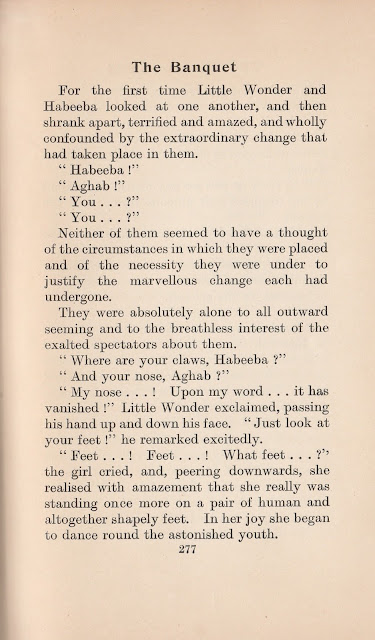 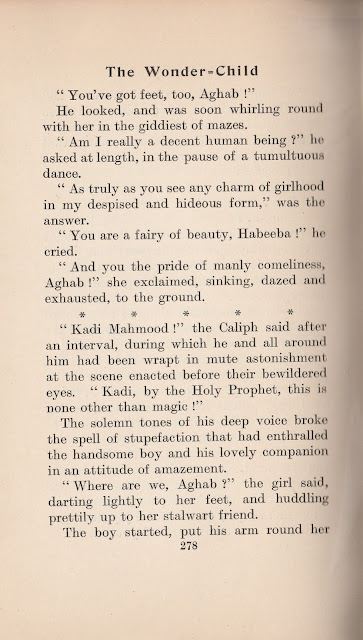 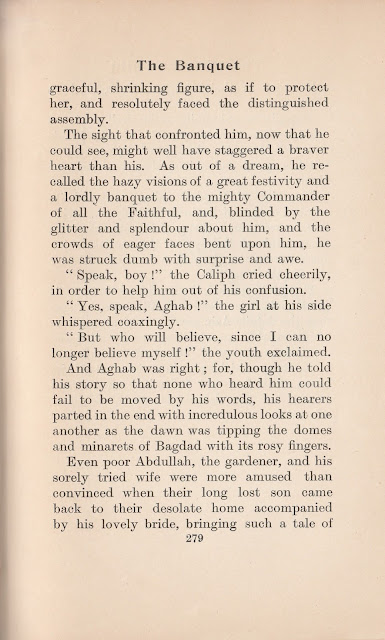 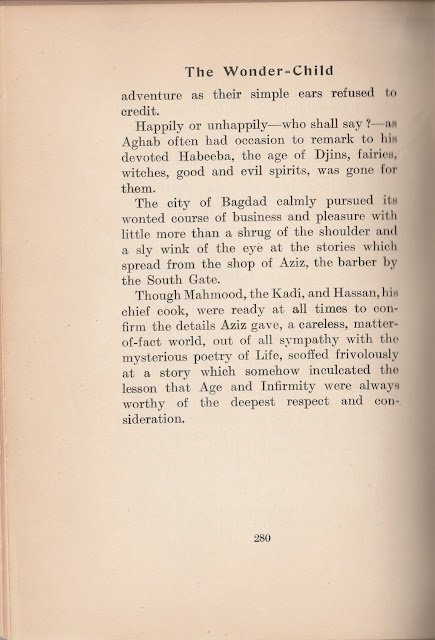 It's been a long journey in our mental caravan.  Some would call this a simple fairy tale, ending in the unrealistic "and they all lived happily ever after."

There is a reason such endings exist.  They bring hope and a needed resolution.

Next week will bring the more traditional version of the story to conclude this series.
Posted by Lois Sprengnether Keel at 1:00 AM